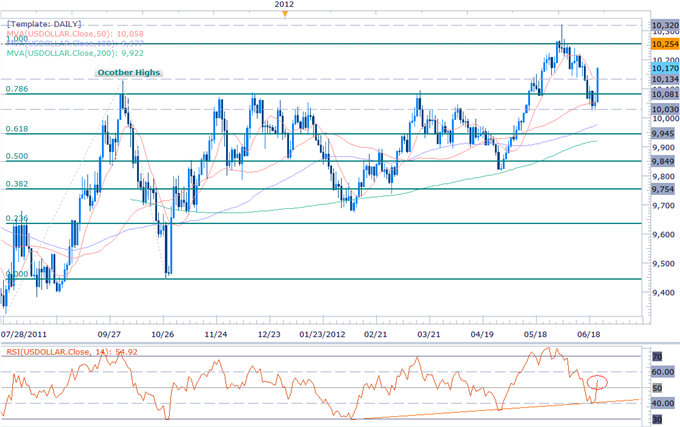 The greenback surged in in North American trade with the Dow Jones FXCM Dollar Index (Ticker: USDOLLAR) advancing 1.13% after moving a staggering 178% of its daily average true range. The losses come on the back of a massive sell-off in equity markets with weaker than expected economic data early in the session weighing heavily on risk appetite just one day after Federal Reserve Chairman Ben Bernanke signaled no further immediate plans for QE3. Initial weekly jobless claims, existing home sales, and the Philadelphia Fed survey all came in below consensus with weaker-than-expected data out of Europe in the overnight session exacerbating the sell-off after euro-area manufacturing shrank at its fastest pace in three years. Reports of expected downgrades of US banks from Moody’s further weighed on sentiment with stocks plummeting to end the day just off session lows. By the close of trade in New York, the Dow, the S&P, and NASDAQ were off by 1.96%, 2.23% and 2.44% respectively.

The dollar soared today as diminishing QE bets and a firm risk off trade stoked demand for the world’s reserve currency with the index posting its largest single day advance since November 9th. The greenback has now breached back above technical resistance at the 78.6% Fibonacci extension taken from the August and October troughs at 10,080 and the October highs at 10,134 to close at 10,170. As we noted in yesterday’s special post-FOMC report, “A breach above the weekly high at 10,111 dispels further downside pressure with such a scenario exposing topside targets at the October high at 10,134 and the 100% extension at 10,255.” Soft daily resistance now stands at 10,220 backed closely by our objective at the 100% extension at 10,255. Daily support now rests at 10,080 backed by 10,030 and the 100-day moving average at 9977. Note that an RSI breach above 50 bodes well for the recent advance with the reversal ahead of the 40-mark offering further conviction that the recent pullback remains a simple correction within the dollar’s bull trend. 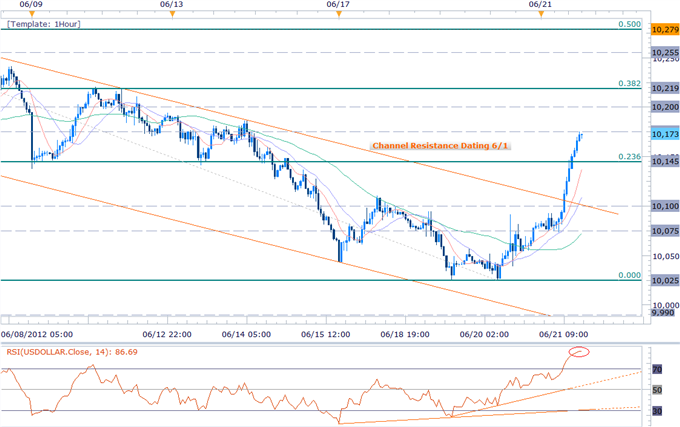 An hourly scalp chart shows the index breaching above channel resistance dating back to June 1st before encountering soft support at the 10,175 mark. The breakout offers conviction on reassessing our setup from yesterday with a fresh Fibonacci extension taken from the April 30th and June 20th lows now eyeing topside scalp targets at the 38.2% extension at 10,220, 10,255 (100% extension on the daily chart) and the 50% extension at 10,280. Interim support now rests with the 23.6% extension backed by 10,100, 10,075, and the recent lows at 10,025. Note that with RSI now in extreme overbought territory, a pullback of magnitude is likely before the resumption of the advance.

The greenback advanced against all four component currencies highlighted by a 1.58% advance against the Australian dollar. We continue to favor selling into aussie rallies after the pair rebounded sharply off key technical resistance at the confluence of the 50% retracement taken from the late February decline and the April lows at 1.0220. Look for the aussie to remain in consolidation over the next 24 hours with pullbacks offering favorable short entries higher. The British pound was the top performer of the lot with a loss of just 0.80% on the session despite broad-based dollar gains. The GBPUSD has now closed back below the March lows with our medium-term bias on the pair cautiously weighted to the downside, eying soft support at 1.5560. Expect the dollar to pare a portion of the advance before heading higher with pullbacks in the index offering entry targets at the above mentioned levels.