USD Index Finds Solace as Bernanke Signals No QE- Is It Time to Buy? 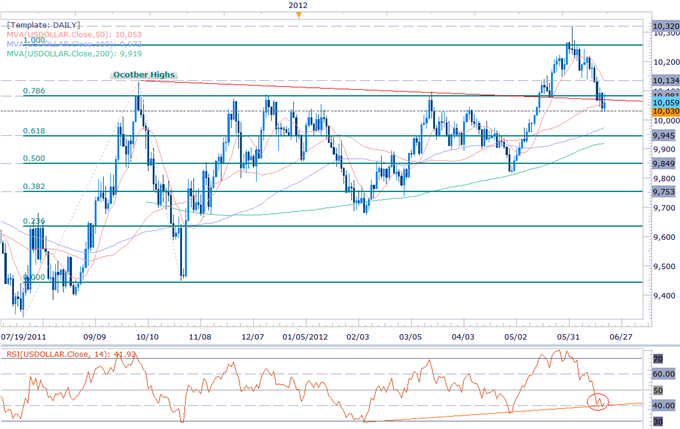 The greenback is firmer at the close of a choppy session in North American trade with the Dow Jones FXCM Dollar Index (Ticker: USDOLLAR) advancing of 0.21% after moving a full 106% of its daily average true range. The FOMC policy decision today shook markets as the central bank announced it plans to extend the duration of Operation Twist until the end of the year, after lowering growth, employment, and inflation forecasts for 2012 through 2014. Markets sold off immediately on the release with the dollar surging against all its major counterparts. The advance was short-lived however as markets digested remarks from Fed Chairman Bernanke’s press conference where he reaffirmed the central bank’s commitment to support the recovery. Bernanke noted that the Fed is “prepared to do what’s necessary” while citing that further asset purchases would be considered when “appropriate.” He went on to note however that further Fed actions may continue to see diminishing returns, with the chairman’s demeanor suggesting that officials remain disappointed with the effectiveness of the current policy as domestic growth prospects continue to soften.

So does this mean that QE3 is on the way? Although the Chairman did note that, “additional asset purchases are among the things we would consider if we need to take additional measures to strengthen the economy,” he warned that the costs associated with further easing initiatives cannot be taken lightly. We have often cited that further Fed action is likely to have less and less of an impact as market tolerance rises and diminishing returns limit the effectiveness of the Fed’s easing policies. As such, it’s likely that the central bank may look to other “non-standard” policies to support the recovery with another round of full on asset purchases unlikely in our opinion. Still, a broader lack of clarity remains with interpretations of Bernanke’s comments ranging from both ends of the spectrum- No QE to the Promise of QE. By the close of a volatile session in New York the major indices were narrowly mixed with the Dow and the S&P off by 0.10% and 0.17% respectively, while the NASDAQ nudged higher by a mere 0.02%.

In the midst of all the speculation for more easing rests the greenback, with the fate of the dollar tied closely to the actions of the Fed. The fact that no further outright easing was announced (operation twist being a more sterile form of easing) suggests that downside pressure on the greenback is likely to remain limited in the interim, although seasonality trends may continue to weigh on the dollar into the close of the month. A break below soft daily support at 10,030 (chart above), eyes targets at the 100-daymoving average at 9975 backed by the 61.8% Fibonacci extension taken from the August and October crests, at 9945. Note that RSI has continued to hold above trendline support dating back to the February lows, with a break below the 40-mark suggesting a more substantial correction may be underway. A breach above the weekly high at 10,111 dispels further pressure with such a scenario exposing topside targets at the October high at 10,134 and the 100% extension at 10,255. 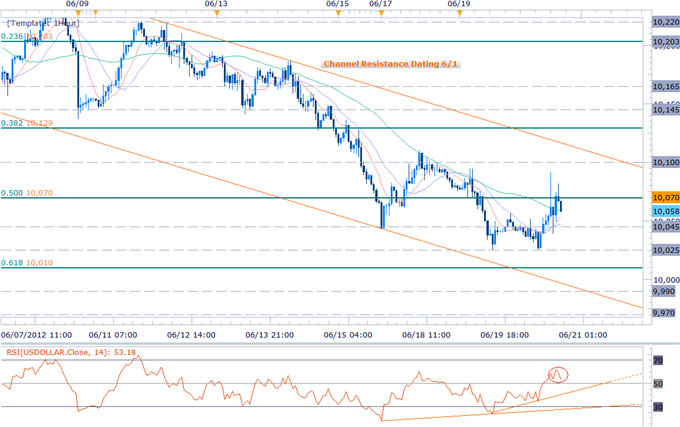 An hourly scalp chart shows the index continuing to trading within the confines of a descending channel formation dating back to the first of the month with the dollar closing just below the 50% Fibonacci retracement taken from the May advance at 10,070. A breach of this level eyes subsequent ceilings at 10,100 and the 38.2% retracement at 10,129 with a close above channel resistance invalidating the recent bearish trend. Interim support rests at 10,045 backed by 10,025, the 61.8% retracement at 10,010, and 9990.

The greenback advanced against three of the four component currencies highlighted by a 0.66% advance against the Japanese yen. We have maintained our long position on the USDJPY pending a crucial break above the monthly highs at 79.81 with targets eyed at May high at 80.60 and 81.05. Our stop now rests below the 200-day moving average at 78.80. The euro was the top performer of the lot with a fractional advance of just 0.02% on the session with the EURUSD continuing to trade within the confines of an ascending channel formation off the June 1st low. For a complete technical outlook on the EURUSD and the USDJPY, refer to the Winners/Losers report. Look for the dollar to remain supported heading into Asia Pacific trade as markets digest today’s developments with a break above short-term channel resistance offering further conviction that he dollar may be forming a base around the 10,030 level.