USD Index Breaks Key Support on QE Bets- But Is It the Right Bet? 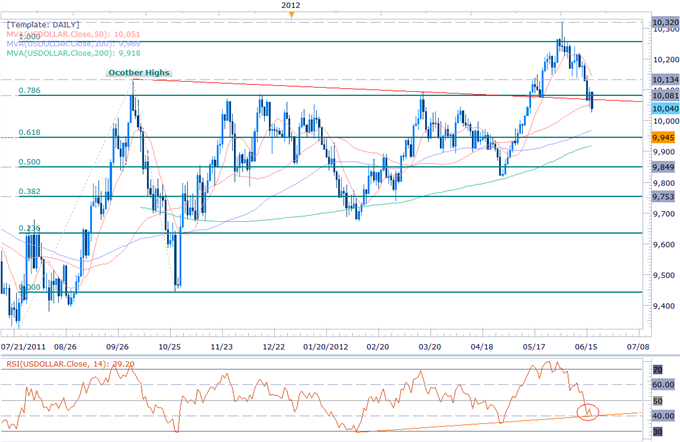 The greenback is off sharply at the close of North American trade with the Dow Jones FXCM Dollar Index (Ticker: USDOLLAR) posting a decline of 0.23% on the session after moving a full 115% of its daily average true range. The losses comes amid a substantial rebound in broader risk appetite with speculation that the Fed will announce new easing measures to support the economy fueling strength in risk assets at the expense of the dollar. Although recent domestic data has been softer than expected, we find it unlikely that the central bank will look to embark on another round of quantitative easing; rather it’s more likely the Fed may change its language with regards to the 2014 pledge to extend the duration of ZIRP (zero interest rate policy) with the possibility of also extending Operation Twist (the purchase of longer dated Treasuries while selling short-term Treasuries in an attempt to suppress long-term yields). Markets rallied throughout the session until newswires reported that German officials had denied plans to use the Eurozone’s rescue fund to purchase bonds of indebted periphery nations with equities trimming a portion of the day’s advance ahead of the close. All three major indices were in the black with the Dow, the S&P, and NASDAQ advancing 0.75%, 0.98%, and 1.19% respectively.

The dollar broke back below the 78.6% Fibonacci extension taken from the August 1st and October 27th troughs at 10,080 before closing below former trendline resistance dating back to the October highs at 10,040. Yesterday we noted that “A close below the 50-day moving average, currently at 10,050, coupled with an RSI break below the 40-mark negates our medium-term bullish bias and risks a more substantial correction in the index with such a scenario eyeing support targets at 100-day moving average at 9,970 and the 61.8% extension at 9,945.” While RSI has yet to break below trendline support dating back to the February low (at the 40-mark), it’s likely that the greenback may remain under pressure heading into tomorrow’s highly anticipated FOMC rate decision where market participants will be lending a keen ear to Fed Chairman Ben Bernanke to weigh the prospects of further easing. Daily topside resistance remains at the former October highs at 10,134 and is backed by the 100% extension at 10,255. 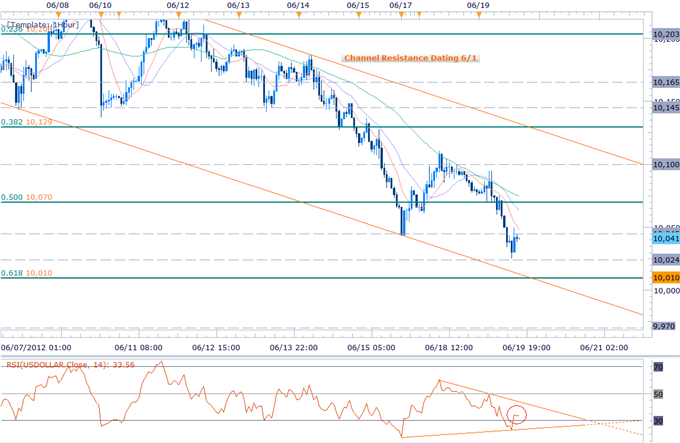 An hourly chart shows the index continuing to trading within the confines of a descending channel formation with the dollar testing soft support at 10,025. A break below the 61.8% Fibonacci retracement taken from the May advance at 10,010 exposes subsequent support targets at 9970, the 78.6% retracement at 9925 and 9900. Interim resistance stands at 10,045 backed by the 50% retracement at 10,070 and 10,100. A breach above channel resistance alleviates further downside pressure in the short-run with such a scenario eyeing topside targets at the 38.2% retracement at 10,129.

The greenback declined against all four component currencies highlighted by a 0.87% decline against the euro. The single currency continues to trade within the confines of an ascending channel formation with only a break below channel support, currently at 1.2570, alleviating further downside pressure on the dollar. The Japanese yen is the worst performer of the lot with an advance of just 0.22% on the session. The yen was weaker against all its major counterparts at the close of trade save the greenback as risk-on flows weighed on demand for the low yielder. Broad-based dollar weakness kept the USDJPY under pressure however as QE bets limited any substantial dollar advances. For a complete technical outlook on the EURUSD and the USDJPY, refer to today’s Winners/Losers report. Look dollar volatility to cool heading into tomorrow’s FOMC rate decision with any mention of another round of QE likely to weigh heavily on the greenback. However, should Bernanke maintain a balanced tone, look for risk assets to sell-off with the dollar likely to remain well supported.