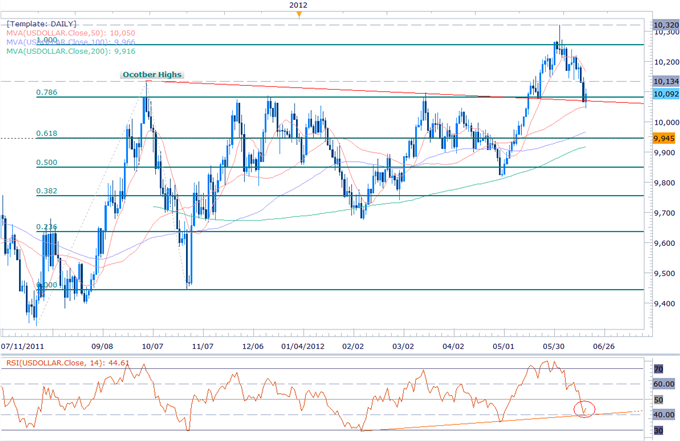 The greenback is modestly firmer at the close of North American trade with the Dow Jones FXCM Dollar Index (Ticker: USDOLLAR) advancing 0.23% on the session after moving 83% of its daily average true range. The advance comes despite a rebound in risk appetite after the close of European trade with the major stock indices paring early losses to close narrowly mixed on the session. While the initial reaction to this weekend’s elections in Greece was supportive of risk, ongoing concerns over rising yields in Spain and Italy saw the relief rally fizzle just hours after the open as yields on Spain’s 10-year climbed to record highs above 7.25%. By the close of trade in New York the Dow was off by 0.20% while the S&P and NASDAQ were higher by 0.14% and 0.78% respectively.

The dollar rebounded off of former trendline resistance (now support) dating back to the October highs before settling just above the 78.6% Fibonacci extension taken from the August 1st and October 27th troughs at 10,080. A close below the 50-day moving average, currently at 10,050, coupled with an RSI break below the 40-mark negates our medium-term bullish bias and risks a more substantial correction in the index with such a scenario eyeing support targets at 100-day moving average at 9,966 and the 50% extension at 9,945. Daily topside resistance now stands at the former October highs at 10,134 backed by the 100% extension at 10,255. 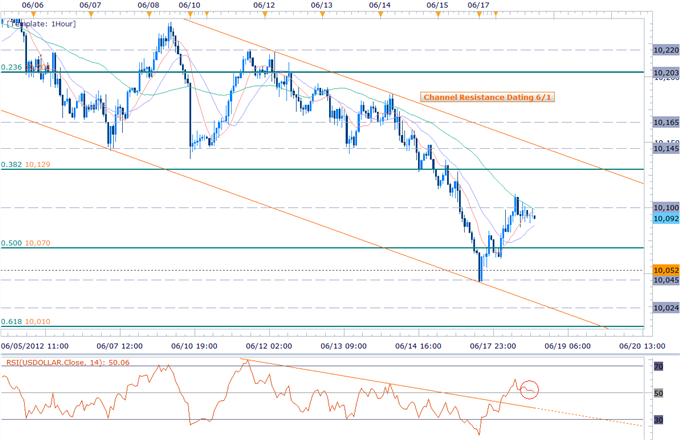 An hourly chart shows the index continuing to trading within the confines of a descending channel formation with the dollar rebounding sharply off channel support at the Sunday open. Soft interim resistance stands at 10,100 backed by the 38.2% Fibonacci retracement taken from the May advance at 10,129 and 10,145. A breach above channel resistance dispels further downside pressure in the interim with such a scenario eyeing topside targets at 10,165 and the 23.6% retracement at 10,203. Interim support rests with the 50% retracement at 10,080 backed by 10,045 and 10,024.

The greenback advanced against three of the four component currencies highlighted by a 0.47% advance against the euro. The single currency remains under pressure as market participants continue to position for a full scale sovereign bailout in Spain amid rising yields on government debt. Look for a break below key support at 1.2540 eying support targets at 1.2485 and the 1.24-figure, with only a breach above (on a close basis) 1.2675 alleviating further downside pressures in the near-term.

The Australian dollar is the top performer of the lot with an advance of 0.62% on the session. The AUD/USD closed just below critical resistance at the confluence of the 61.8% Fibonacci retracement taken form the May decline and channel resistance at 1.0130, with a breach above this level eyeing targets at the April lows around 1.0225. Daily interim support rests with the 50% retracement at 1.0025. Look for the dollar to take cues off broader risk trends with this week’s FOMC meeting on Tuesday and Wednesday likely to offer clear direction as Bernanke takes the stage.