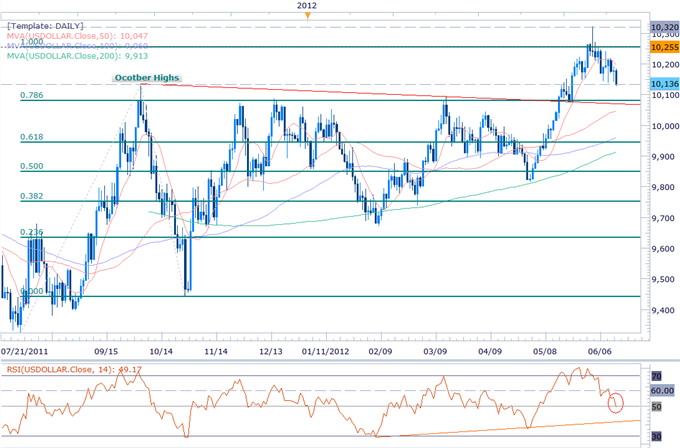 The greenback is markedly weaker at the close of a North American trade with the Dow Jones FXCM Dollar Index (Ticker: USDOLLAR) declining 0.48% on the session after moving 98% of its daily average true range. The losses come on the back of an impressive rally in equity markets as a flood of headlines hit newswires just ahead of the close. The final hour of trade saw a surge in volatility after a G20 official cited that global “central banks are preparing for coordinated action to provide liquidity” ahead of this weekend when key elections in Greece will likely determine the future of the country’s membership in the euro project.

Remarks from various global central bankers soon followed with comments from the likes of Mervin King who stated that the case for “more monetary easing is growing” as the crisis in Europe casts a, “large black cloud of uncertainty” on the UK economy. In a speech in London today Governor King went on to note that the conditions in the UK have deteriorated since the May inflation report with the BoE now looking to activate a new bank funding plan in the weeks ahead to “meet market strains.” The comments continued to cross the wires with Japan’s vice minister for international affairs, Takehiko Nakao, citing concerns over the persistent appreciation in the yen while noting that the rise has been “one-sided” and does not reflect the fundamentals. Nokao also noted that European officials must address the banking crisis “very decisively” as the situation continues to threaten stability in financial markets. While a global intervention will alleviate macro pressures in the short-term, at the end of the day, the issues facing the European economies are not ones of liquidity but solvency; and although markets may find solace in such decisive action now, the deeper rooted structural problems that have led to the crisis will not be solved by additional central bank action.

Today’s developments came just hours after Egan-Jones downgraded France’s credit rating to BBB+ from A- with the rating agency citing “deterioration” in the country’s credit metrics and the need for further support of the nation’s banks. The news was seemingly dismissed after the G20 announced preparations for a coordinated intervention with equity markets closing just off session highs. By the close of trade in New York all three major indices were near session highs with the Dow, the S&P and NASDAQ advancing 1.24%, 1.08% and 0.63% respectively.

The dollar is now testing the bottom of its recent range with the index now pressing key support at the October highs at 10,134. As we noted in yesterday’s USD Trading Report, this level remains paramount with a break below risking substantial losses for the greenback with such a scenario eyeing daily support at the 78.6% Fibonacci extension taken from the August 1st and October 27th troughs at 10,080. Daily interim resistance now stands with the 10-day moving average at 10,185 backed by the 100% extension at 10,255.While our long-term outlook remains weighted to the topside, we remain neutral at these levels and ahead of major event risk this weekend with only a break below 10,080 invalidating our bias. 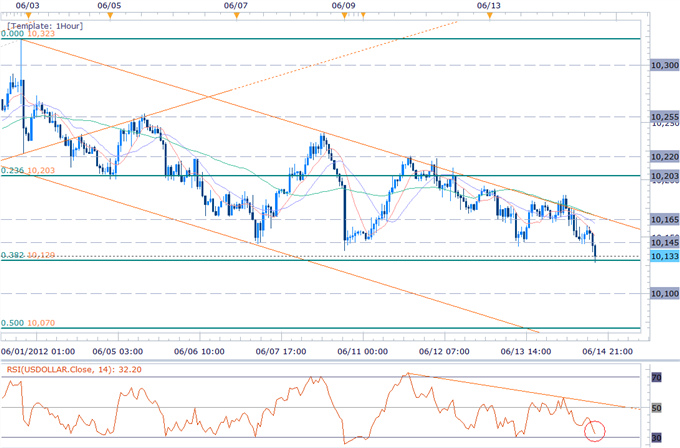 An hourly chart shows the index trading within the confines of a descending channel formation with the dollar testing interim support at the 38.2% Fibonacci retracement taken form the May advance at 10,130 after rebounding off channel resistance. A break below this level eyes soft interim support at 10,100, the 50% retracement at 10,070 and the 50-day moving average at 10,050. Look for the dollar to remain under pressure with only a topside breach of the channel formation alleviating further downside pressure. Such a scenario eyes topside resistance targets at the 23.6% retracement at 10,203, 10,220 and 10,255.

The greenback declined against all four component currencies highlighted by a 0.91% decline against the Australian dollar. The AUD/USD broke above parity just ahead of the close with the pair now just below daily resistance at the 50% Fibonacci retracement taken form the May decline at 1.0025. A breach above this mark looks eyes subsequent daily resistance targets at the 50-day moving average at 1.0070 and the key 61.8% retracement at 1.0130. Support rests with the 38.2% retracement at 99520.

The Japanese yen is the weakest performer of the lot with an advance of just 0.18% despite broad-based dollar losses. Our long-term outlook on the USD/JPY remains weighted to the topside with remarks from Japanese officials today likely to limit yen appreciation in the interim. It’s also worth noting that a rebound in risk appetite is likely to see the pair higher as demand for relative safety of the yen continues to wane. For a complete technical outlook and scalp targets on the yen, refer to Tuesday’s Winners/Losers report.

Join Michael on Tuesday morning for a Live Scalping Webinar