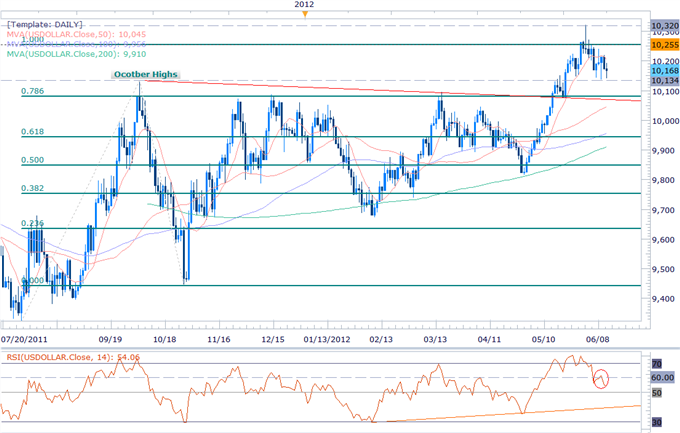 The greenback is fractionally higher at the close of North American with the Dow Jones FXCM Dollar Index (Ticker: USDOLLAR) climbing 0.12% on the session after moving 89% of its daily average true range. Early losses in the dollar were pared later in the session as equity market came under pressure amid ongoing concerns regarding the deepening crisis in Europe with rating agency Egan-Jones downgraded Spain’s credit rating to junk status (from B to CCC+). Moody’s followed suite soon after the close, downgrading Spain by three notches to Baa3 from A3 with the agency noting that further downgrades are possible as the government faces “very limited” access to international debt markets amid weakness in the domestic economy. By the close of trade in New York all three major indices were in the red with the Dow, the S&P and NASDAQ off by 0.62%, 0.70% and 0.86% respectively.

The dollar reversed course just ahead of critical support at the October high at 10,134. This level remains paramount with a break below risking substantial losses for the index with such a scenario eyeing support at the 78.6% Fibonacci extension taken from the August 1st and October 27th troughs at 10,080. Daily interim resistance now stands with the 10-day moving average at 10,200 and the 100% extension at 10,255. While our long-term outlook remains weighted to the topside, look for the index to remain within its recent range with only a break below 10,080 invalidating our bias. 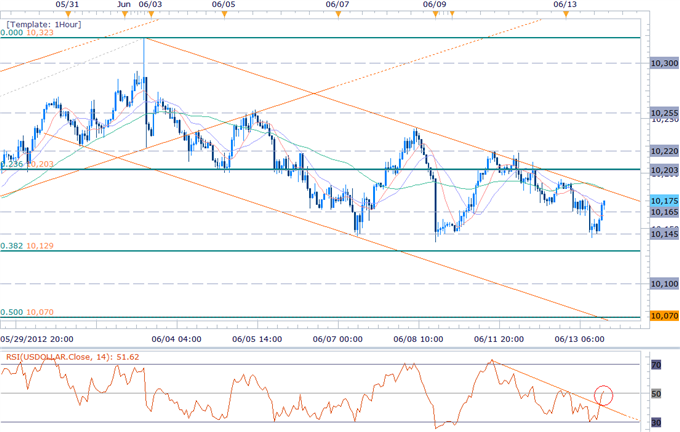 An hourly chart shows the index trading within the confines of a descending channel formation with the index now eyeing a test of channel resistance, currently around 10,185. A breach of this formation targets interim resistance levels at the 23.6% Fibonacci retracement taken from the May advance at 10,203, 10,220 and 10,255. A move past this level offers further conviction on our directional bias with such a scenario eyeing targets at 10,300 and 10,320. Interim support rests at 10,165 backed closely by 10,145, the 38.2% retracement at 10,130 and 10,100.

The greenback advanced against two of the four component currencies highlighted by a .31% advance against the British pound. The sterling remained on the defensive throughout the session amid speculation that a growing rift within the MPC may see the Bank of England to ease policy further as the economy remains in recession. For a technical outlook and scalp levels on the GBP/USD refer to today’s Winners/Losers report. Interestingly, the euro is the top performer of the lot with an advance of 0.58% on the session despite the sovereign downgrades seen at the close. While the outlook for the euro remains heavily weighted to the downside, results of the Greek elections this weekend are likely to fuel exceptional volatility in the pair as investors weigh prospects for a possible exit of the euro. Look for the greenback to remain well supported heading into Asia Pacific trade as the index continues to hold its recent range.