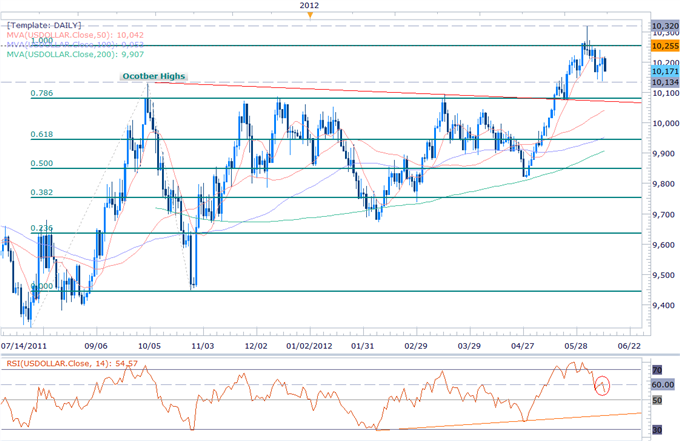 The greenback is markedly weaker at the close of North American trade with the Dow Jones FXCM Dollar Index (Ticker: USDOLLAR) off by 0.42% on the session after moving just 82% of its daily average true range. The losses come on the back of a rally in broader risk assets with markets temporarily shrugging off downgrades on long-term ratings for 18 Spanish banks by rating agency Fitch and as Spain’s 10-year bond hit euro-era highs at 6.807%. Speculation that the ECB will look to guarantee bank deposits and calls for further easing from the Federal Reserve helped support the rally with stocks closing at session highs as US Treasury yields climbed. By the close of trade in New York, the Dow, the S&P, and NASDAQ were higher by 1.31%, 1.17%, and 1.19% respectively.

The dollar pulled away from key resistance at the 100% Fibonacci extension taken from the August 1st and October 27th troughs at 10,255 with interim daily support resting at the October high at 10,134. This level remains paramount with a break below risking substantial losses for the index. Initial support comes in at the 78.6% extension at 10,080 with stronger support is seen at the confluence of the 100-day moving average and the 61.8% extension around 9950. As we noted in yesterday’s report, ‘While our long-term outlook remains weighted to the topside, the dollar rally is likely to fade into the close of the week with only a break below the 78.6% extension at 10,080 invalidating our bias.’ 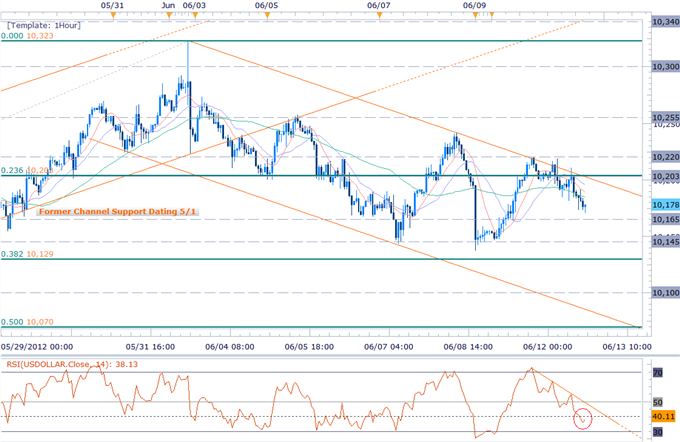 The greenback declined against three of the four component currencies highlighted by a 1.02% decline against the Australian dollar. The aussie has continued to track broader risk trends with the AUDUSD now eyeing the Sunday 20-day high just above parity. Look for the pair to trend sideways to lower with only a breach back above parity dispelling downside pressure in the interim. Even the euro participated in today’s rally with the EURUSD advancing 0.21% on the session amid a relentless stream of headlines pouring out of the region. For a complete technical outlook and scalp targets for the single currency, refer to this week’s Scalp Report. The Japanese yen is the worst performer of the lot with a decline of 0.10% on the session. The yen is likely to remain under pressure so long as market sentiment remains afloat with our long-term outlook on the USDJPY remaining weighted to the topside. For a complete scalp targets on the USDJPY refer to this morning’s Winners/Losers Report. Look for the dollar to remain well supported as we head into Asia-Pacific trade with another bout of risk aversion eyeing topside targets in the index.