The greenback is firmer at the close of North American trade with the Dow Jones FXCM Dollar Index (Ticker: USDOLLAR) advancing 0.13% on the session after moving a full 117% of its daily average true range. The advance comes on the back of a sharp reversal in broader risk assets as the euphoria from a €100 billion Spanish bailout to assist the ailed banking sector quickly faded. Equities came off aggressively soon after the open with the greenback paring all of the declines from the overnight session as investors sought the safety of the dollar, the yen, and US Treasuries. By the close of trade all three major indices were deep in the red with the Dow, the S&P and NASDAQ off by 1.14%, 1.26% and 1.70% respectively.

The dollar rebounded sharply just ahead of key daily support at the former October high at 10,134 to close at 10,210. Topside resistance continues to stand with the 100% Fibonacci extension taken from the August 1st and October 27th troughs at 10,255and is backed by 10,320. While our long-term outlook remains weighted to the topside, the dollar rally is likely to fade into the close of the week with only a break below the 78.6% extension at 10,080 invalidating our bias. 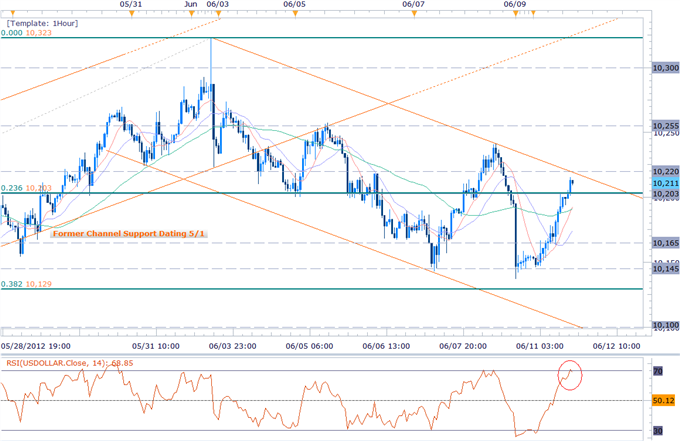 An hourly chart shows the index trading within the confines of a newly formed descending channel formation with the dollar now poised for a test of channel resistance at 10,220. A breach above this mark offers further conviction on our directional bias with such a scenario eyeing interim resistance targets at 10,255 (the 100% Ext on the daily chart), 10,300 and the June high at 10,323. Soft interim support rests at 10,165 backed by 10,145 and the 38.2% retracement taken from the May advance at 10,129. We continue to favor long positions off of pullbacks in the index with a topside breach of the channel formation targeting subsequent resistance targets.

The greenback advanced against two of the four component currencies highlighted by a 0.47% advance against the Australian dollar. The aussie remains at risk at these levels with key daily support now seen at the 23.6% Fibonacci retracement taken from the May decline at 9790 backed by the November low at 9662. Only a breach (on a close basis) above the 38.2% retracement at 9920 would alleviate further downside pressure in the interim. The British pound is the top performer on the session with an advance of 0.09% on the session despite a broader rebound in the dollar. We remain neutral on the sterling at these levels pending a break out of its recent range between the March lows at the 1.56-handle and the 1.54-figure. Look for the dollar to remain well supported heading into Asia/Pacific