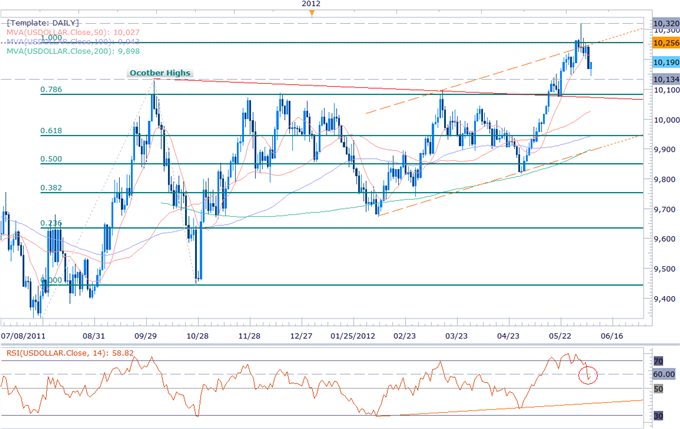 The greenback is modestly firmer at the close of North American trade with the Dow Jones FXCM Dollar Index (Ticker: USDOLLAR) advancing 0.16% on the session after moving just 78% of its daily average true range. The gains come amid a mixed performance in equity markets which were markedly higher at the open after China cut its key interest rate by 25 basispoints, bringing the one year borrowing rate down to 6.31% and the deposit rate to 3.25%. The move highlights ongoing concerns among global policymakers that the deepening crisis in Europe is threatening global growth prospects with global market rallying on the news. Stocks pared early gains however on the back of Bernanke’s testimony before Congress where the Fed Chairman offered no clear signal for further easing from the central bank. Losses accelerated into the close after the Federal Reserve released a new proposal to enact an international agreement aimed at increasing the capital requirements in an attempt to shield the economy from another crisis should financial institutions take unexpected losses. By the close of trade in New York, the Dow was higher by just 0.37% while the S&P and NASDAQ were off by 0.01% and 0.48% respectively.

The dollar pared a portion of yesterday’s sharp decline with the index reversing course just ahead of daily support at the October highs at 10,134. Topside resistance stands at the 100% % Fibonacci extension taken from the August 1st and October 27th troughs at 10,255 and is backed by 10,320. While our long-term outlook remains weighted to the topside, look for the dollar to remain in consolidation as we head into Asia-Pacific trade with only a break below the 78.6% extension at 10,080 invalidating our bias. 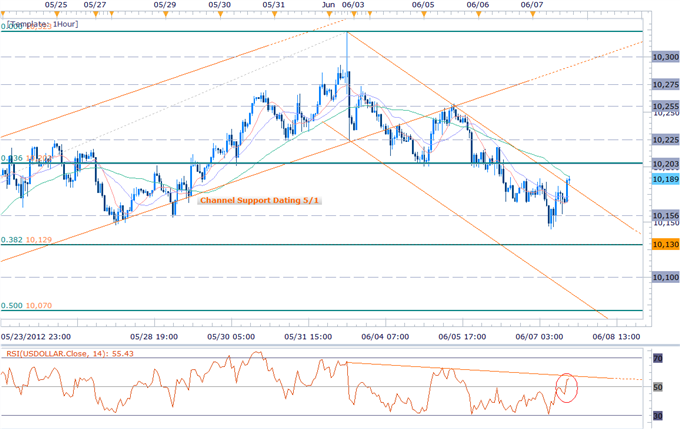 An hourly chart shows the index attempting to breach above channel resistance with the greenback closing just below the 23.6% Fibonacci retracement taken from the May advance at 10,203. Soft interim support now rests at 10,156 with subsequent floors seen at the 38.2% retracement at 10,130, 10,100, and the 50% retracement at 10,070. An RSI breach above trendline resistance dating back to the June 1st high confirms the breach with a break above 10,203 eyeing soft resistance targets at 10,255, 10,275 and 10,300.A breach above last week’s high at 10,323 offers further conviction on our directional bias with such a scenario eyeing topside targets at 10,340 and 10,400.

The greenback advanced against three of the four component currencies highlighted by a 0.51% advance against the Japanese yen. We have maintained our long position from last week with a breach above channel resistance dating back to the March 21st high offering further conviction on our positioning. The British pound is the strongest performer of the lot with an advance of 0.22% on the session after the BoE left interest rates unchanged at 0.50%. For a complete technical outlook and key levels on the USD/JPY and GBP/USD refer to today’s Winners/Losers scalp report.