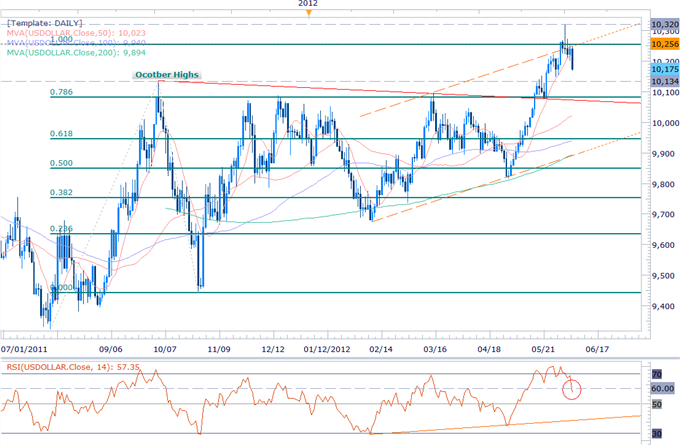 The greenback is markedly weaker at the close of North American trade with the Dow Jones FXCM Dollar Index (Ticker: USDOLLAR) off by 0.67% on the session after moving a full 135% of its daily average true range. The losses come on the back of a stellar performance in equity markets with a rebound in risk appetite fueling a broad-based rally in stocks amid speculation that the ECB will do more to shore up the ailed banking system while fostering a stronger recovery. At the same time, renewed speculation for another round of quantitative easing from the Fed propped up risk sentiment despite an upbeat Beige Book and it seems as though market participants continue to see scope for additional support as the deepening crisis in Europe threatens the global economy. Stocks closed at session highs with the Dow, the S&P, and NASDAQ surging 2.37%, 2.30% and 2.40% respectively while the greenback posted its largest single day decline since January 27th.

The dollar pulled away from key daily resistance at the 100% Fibonacci extension taken from the August 1st and October 27th troughs at 10,255 with and RSI break back below the 60-mark suggesting that a larger correction may already be underway. Daily support comes in at the former October high at 10, 134 backed by the 78.6% extension at 10,080. While our long-term outlook remains weighted to the topside, look for the dollar to remain on the defensive as we head into Asia-Pacific trade with only a break below 10,080 invalidating our bias. 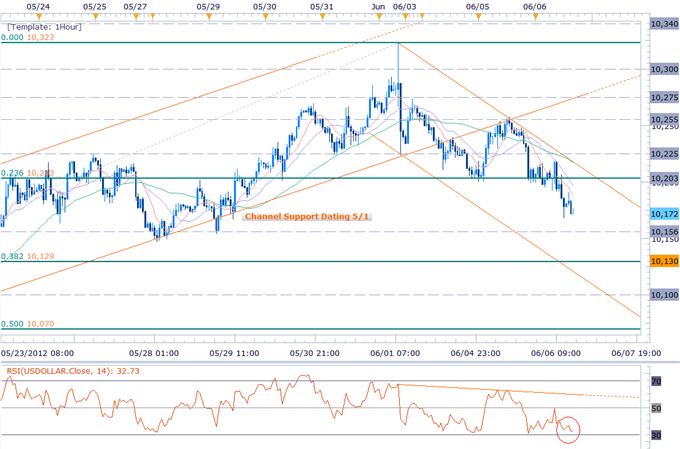 An hourly chart shows the index trading within the confines of a newly formed descending channel formation with the greenback closing below the 23.6% Fibonacci retracement taken from the May advance at 10,203. Soft interim support now rests at 10,156 with subsequent floors seen at the 38.2% retracement at 10,130, 10,100, and the 50% retracement at 10,070. Initial resistance is eyed at the confluence of channel resistance and the 23.6% retracement at 10,203 backed by 10,255, 10,275 and 10,300. A breach above last week’s high at 10,323, invalidates this current setup with such a scenario eying topside targets at 10,134, and 10,400. Note that the index will likely remain under pressure in the interim with a breach above channel resistance and an RSI break above 60 needed to dispel further downside pressure.

The greenback declined against three of the four component currencies highlighted by a 1.86% decline against the Australian dollar. Stronger than expected GDP data coupled with a rebound in broader market sentiment fueled a massive rally in the high yielder as growth prospects improved and despite a 25 basis points interest rate cut earlier this week. While the rally has been rather impressive, it’s important to note that key employment data released later tonight may intensify the volatility with a weaker than expected print risking a pullback of magnitude after posting its largest single day advance this year.

The Japanese yen is the weakest performer of the lot with a loss of 0.62% on the session. The continued risk on environment is likely to keep the yen under pressure in the interim as investors unwind haven trades move in favor of higher yielding assets. We have maintained our long position from last week with initial targets now targeted at 80.10. For a technical outlook and key levels on the AUD/USD and the USD/JPY, refer to the Winners/Losers report.