USD Index Up 4.25% in May- NFPs, June Opening Range to Offer Clarity 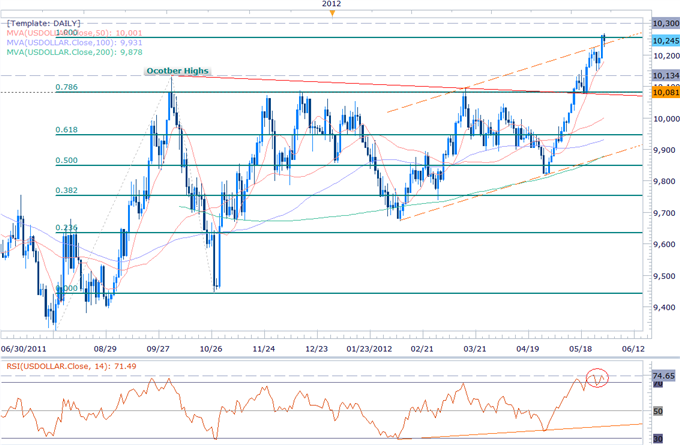 The greenback is softer at the close of North American trade with the Dow Jones FXCM Dollar Index (Ticker: USDOLLAR) off by 0.19% on the session after moving just 87% of its daily average true range. The loss comes amid continued weakness in risk assets with the yields on US Treasuries hitting record lows as European debt concerns and weaker-than-expected US data stoked haven flows. Weekly jobless claims rose by 10K to 383K, climbing for a fourth consecutive week according to the labor department, while the second read on annualized 1Q GDP came in at 1.9% q/q, down from the preliminary read of 2.2% q/q. Misses on 1Q personal consumption and the Chicago purchasing manager index added to the bearish tone with equities coming off sharply at the open. By the close of trade in New York all three major indices were in the red, marking the worst May since 2010, with the Dow, the S&P, and NASDAQ lower by 0.21%, 0.23%, and 0.35% respectively.

The dollar pulled back below the 100% Fibonacci extension taken from the August 1st and October 27th troughs at 10,255 before closing just above former channel resistance at 10,245. As we noted in yesterday’s report, although our long-term outlook remains weighted to the topside with our objective now eyed at 10,300,a pullback of some magnitude is likely after advancing six of the past seven sessions and as trade thins ahead of Friday’s much anticipated non-farm payrolls report. Interim support remains at the former October high at 10,134 backed by the 78.6% extension at 10,082. Note that bearish divergence in RSI continues to warn of a likely correction in the index with a break below 70 in the oscillator offering further conviction on a pullback. 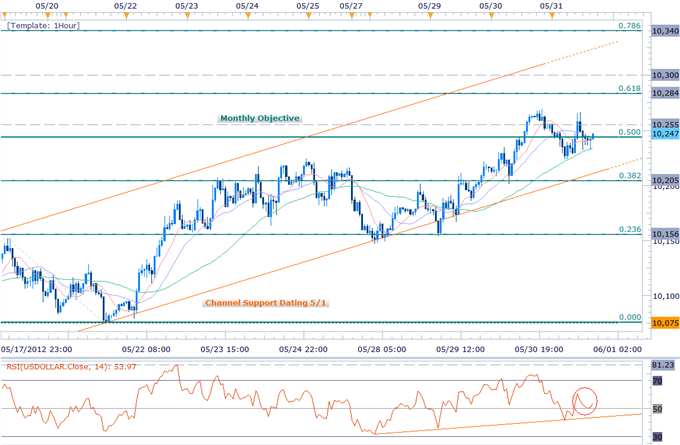 An hourly chart shows the index continuing to trading within the confines of an ascending channel formation dating back to April 30th with the dollar closing just above the 50% Fibonacci extension taken from the April 30th and May 21st troughs at 10,244. A break below channel support risks a correction on the index with interim support seen at the 38.2% extension at 10,205, the 23.6% extension at 10,156 and last week’s low at 10,075. Topside resistance stands at the key 61.8% extension at 10,284 backed by 10,300 and the 78.9% extension at 10,340. Look for price action in the first week of June trade to offer further conviction on a directional bias with a correction below 10,075 risking substantial losses for the index.

The greenback fell against two of the four component currencies highlighted by a 0.93% decline against the Japanese yen. Risk-off flows have continued to favor the yen over the reserve currency as positive real interest rates in Japan increase the appeal of the low yielder as a haven trade. The yen is the top performing currency ahead of tomorrow’s US employment report with the low yielder besting all its major counterparts in US trade. The USD/JPY has now broken below our favorable long entry zone between the 200-day moving average at 78.65 and the 61.8% Fibonacci retracement of the February advance at 79.10, with our stop placed just below the 78.6% extension at 77.70. While we are maintaining a small long position from these levels, the likelihood of further yen strength continues to increase as we head into NFPs. For a complete outlook on the USD/JPY and scalp prospects for tomorrow’s employment print, refer to today’s Trading the News Report.

The British pound is the weakest performer of the lot with a decline of 0.46% on the session. Remarks made by the Bank of England’s Charles Bean eluded to the possibility of further easing from the central bank with the sterling falling as low as 1.5360 before closing at the 1.54-figure. We remain neutral on the pound at these levels while noting critical support at the 2012 lows made on January 13th at 1.5232. The euro closed the session virtually flat on the session for a fractional decline of just 0.03% as the single currency remains at the mercy of an endless stream of headlines coming out of Europe. For a complete outlook on the EUR/USD including scalp targets for tomorrow’s NFP release, refer to this week’s Scalp Report.