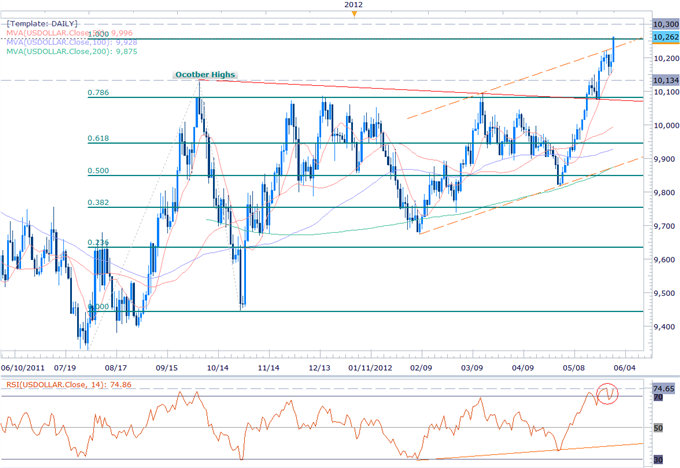 The greenback surged today with the Dow Jones FXCM Dollar Index (Ticker: USDOLLAR) advancing 0.70% on the session after moving a full 142% of its daily average true range. The gains come on the back of a global risk sell-off with equity markets sharply lower across the board amid ongoing concerns about deteriorating conditions in Europe. Yields on Spanish and Italian debt soared as contagion fears continued to take root with a Greek exit of the euro now becoming more of more likely. US markets closed off session lows with the Dow, the S&P, and NASDAQ falling by 1.28%, 1.43% and 1.17% respectively as haven flows boosted demand for the reserve currency.

The dollar triggered our objective cited last week at 100% Fibonacci extension taken from the August 1st and October 27th troughs at 10,255 before closing just higher at 10,262. Our objective now shifts to the 10,300 mark with a pullback of some magnitude likely after advancing six of the past seven sessions and as trade thins ahead of Friday’s much anticipated non-farm payrolls report. Interim support remains at the former October high at 10,134 backed by the 78.6% extension at 10,082. Note that that daily RSI continues to hold at its highest level since the index’s inception and speaks to the strength of the current trend with a test of our objective at 10,300 likely should risk appetite remain on the defensive. 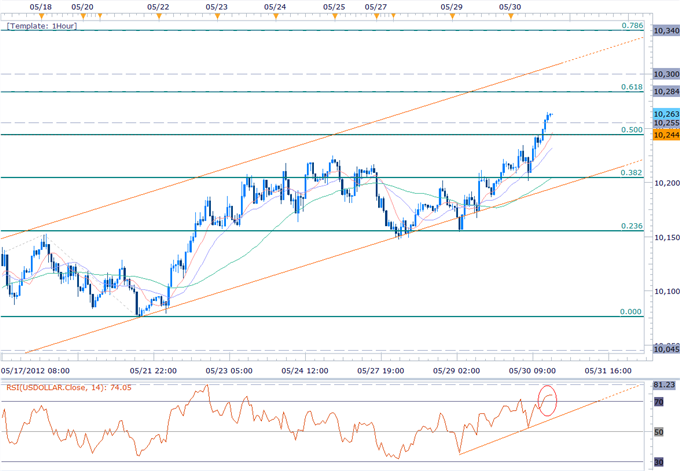 An hourly chart shows the index trading within the confines of an ascending channel formation dating back to April 30th with the dollar closing just above our objective at 10,255. Interim topside resistance targets are eyed at the 61.8% Fibonacci extension taken from the April 30th and May 21st troughs at 10,284, 10,300 and channel resistance (currently around 10,320). Support continues to rest with the 50% extension at 10,244 backed by channel support just above the 38.2% extension at 10,205. We reserve this levels as our bottom limit and if compromised risks a more substantial correction for the dollar.

The greenback advanced against three of the four component currencies highlighted by a 1.43% advance against the Australian dollar. Risk-off flows have continued to weigh heavily on the high yielders with an aussie break below 9700 eyeing our objective at 9660. The Japanese yen is the top performer of the lot with an advance of 0.54% against the dollar after besting all its major counterparts in US trade. While our medium-term bias on the USD/JPY remains weighted to the topside, extreme risk aversion conditions may keep the pair under pressure in the interim with pullbacks offering favorable long entries. For a complete technical outlook and scalp targets on the AUD/USD and the USD/JPY refer to today’s Winners/Losers report. Look for the dollar to remain well supported heading into Asia Pacific trade with volatility likely to taper off ahead of Friday’s highly anticipated non-farm payrolls report where consensus estimates are expecting the addition of some 150K jobs for the month of May. However with 1Q GDP, personal consumption and the ADP employment change on tap for tomorrow morning, the dollar could find itself on the defensive should the data threaten domestic growth prospects.