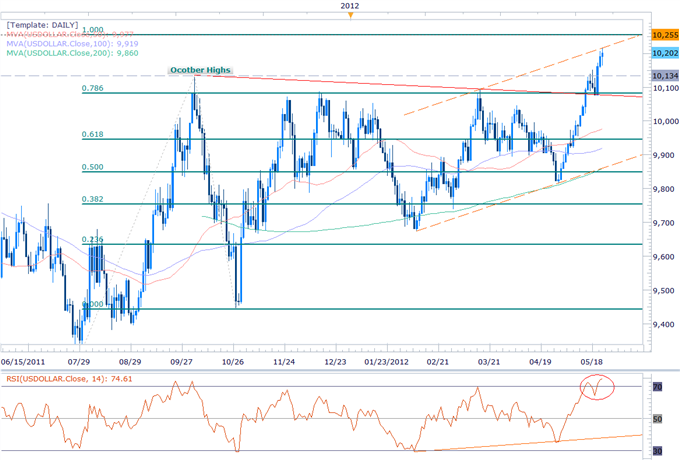 The greenback advanced for a third consecutive session today with the Dow Jones FXCM Dollar Index (Ticker: USDOLLAR) climbing 0.11% on the session after moving 114% of its daily average true range. A rebound in European markets overnight faded in early US trade amid ongoing concerns over deepening debt crisis. Equities drifted lower throughout a choppy session before surging just ahead of the close after Italian Prime minister Mario Monti cited that, “there were more countries supporting the euro bonds than against them.” However with German Chancellor Angela Merkel having already explicitly voiced her disapproval against a collective debt pool, it looks as though the governments under the single currency will become increasingly reliant on further monetary easing from the European Central Bank. Nonetheless, markets took solace in Monti’s remarks with the Dow and the S&P closing higher on the session by 0.27% and 0.14% respectively while the NASDAQ ended lower by 0.38%.

The dollar was continued its advance today with the index testing channel resistance at 10,219 before closing just lower at 10,202. We maintain our primary objective at the 100% Fibonacci extension taken from the August 1st and October 27th troughs at 10,255, while noting that the greenback is likely to undergo a correction of some magnitude before breaking higher after advancing 14 of the past 18 sessions. That said, it’s important to keep in mind that in such a headline driven market, a sudden shift into risk aversion is within the realm of possibilities with such a scenario likely to offer strong dollar support as haven flows boost demand for the world’s reserve currency. Daily support now rests at the October highs at 10,134 backed by key support at the confluence of former trendline resistance dating back to the October highs and the 78.6% extension at 10,083. Note that daily RSI has now reached its highest level since the index’s inception and speaks to the strength of the current trend with a test of our objective at 10,255 likely should risk appetite remain on the defensive. An hourly chart shows the index trading within the confines of an ascending channel formation dating back to April 30th with the dollar struggling to hold above the 38.2% Fibonacci extension taken from the April 30th and May 21st troughs at 10,205. Interim support rests with the 23.6% extension at 10,155 with a break below channel support risking a decline to the weekly low made on Monday at 10,076. Topside targets are held at the confluence of channel resistance and the 50% extension at 10,245 backed by our objective at 10,255.

The greenback advanced against three of the four component currencies highlighted by a 0.36% advance against the euro. The single currency remains at risk at these levels with our initial objective at the 61.8% Fibonacci extension taken from the October 27th and February 29th crests at 1.2485 still intact. The Australian dollar is the top performer of the lot with an advance of 0.21% on the session. Look for the AUD/USD to continue to track broader risk trends with our objective at the November low at 9665 now in view. Only a breach above the weekly high at 9934 would alleviate further downside pressure.

Join Michael on Tuesday morning for a Live Scalping Webinar.