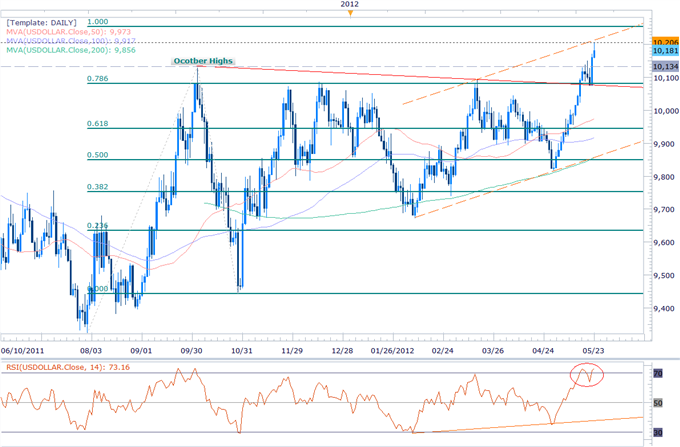 The greenback advanced for a second consecutive session today with the Dow Jones FXCM Dollar Index (Ticker: USDOLLAR) climbing 0.20% on the session after moving 107% of its daily average true range. Global equity markets were on the defensive amid ongoing expectations of a Greek-euro exit with US stocks off sharply at the open as European markets slumped 2.3% - 2.7% across the board. While the EU summit yielded little in the way of fresh new directives to combat the ongoing debt crisis, rumors circulated that German Chancellor Angela Merkel may look to implicitly guarantee EU banks in an apparent effort to buy more time as investor confidence continues to wane. Speculation of such a measure comes on the heels of comments made by Greek Prime Minister Lucas Papademos yesterday when he cited that the nation was considering preparations for an exit from the euro zone. Nonetheless, the rumor prompted a sharp rally in risk with the S&P and the NASDAQ closing higher by 0.17% and 0.39% respectively, while the Dow ended off by just 0.05%.

The dollar continued its advance today with the index climbing as high as 10,206 before paring gains to end the day at 10,181. A look at the encompassing structure sees the greenback trading within the confines of an ascending channel formation with our medium-term objective eyed at the 100% Fibonacci extension taken form the August 1st and October 27th troughs at 10,255. Key daily support rests at the confluence of former trendline resistance dating back to the October highs and the 78.6% extension at 10,083. Note that daily RSI has now reached its highest level since October 4th when the index peaked at 10,134. That said, a move higher in the oscillator would suggest persistent strength in momentum with a test of our objective likely should risk appetite remain on the defensive. 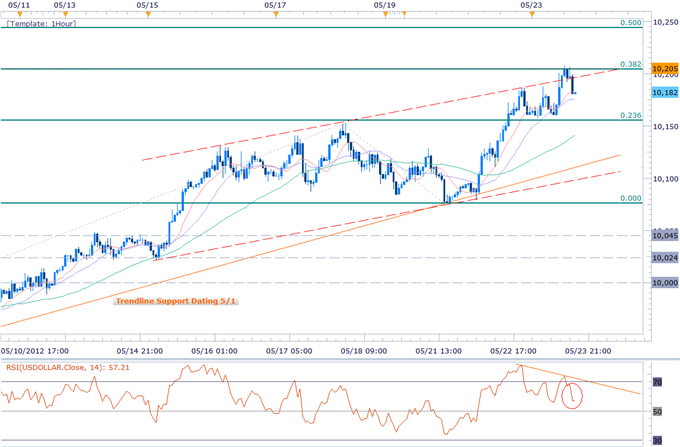 An hourly chart shows the index trading within the confines of a newly formed ascending channel formation with the greenback closing just below channel resistance at 10,162. Interim topside resistance now stands at the 38.2% Fibonacci extension taken from the April 30th and May 21st troughs at 10,205 and the 50% extension at 10,245. Initial support rests at 10,134 backed by channel support and the weekly low made yesterday at 10,076.

The greenback advanced against three of the four component currencies highlighted by a 0.70% advance against the euro. As noted in yesterday’s USD trading report, “the euro remains at risk at these levels with a break below the January lows at 1.2623 likely to give way to accelerated losses for the single currency.” Indeed this level was compromised today with the EUR/USD plummeting as low as 1.2550 before paring a portion of the decline to close at 1.2580. We remain bearish on the pair at these levels noting our initial objective at the 61.8% Fibonacci extension taken from the October 27th and February 29th crests at 1.2485. For complete EUR/USD scalp targets refer to the Trading the News Report.

The Japanese yen was the strongest performer of the lot with an advance of 0.62% on the session as a lack of further stimulus measures from the BoJ and classic haven flows kept the low yielder well supported. For a complete outlook on the yen including key scalp levels, refer to this morning’s Winners/Losers report. Look for the dollar to remain well supported heading into Asia Pacific trade and the slew of economic data out of Europe may further increase the appeal of the greenback should the developments highlight an increased risk of a prolonged recession in the euro region. Refer to the economic calendar for a list of the key data prints due out of Europe in overnight trade.