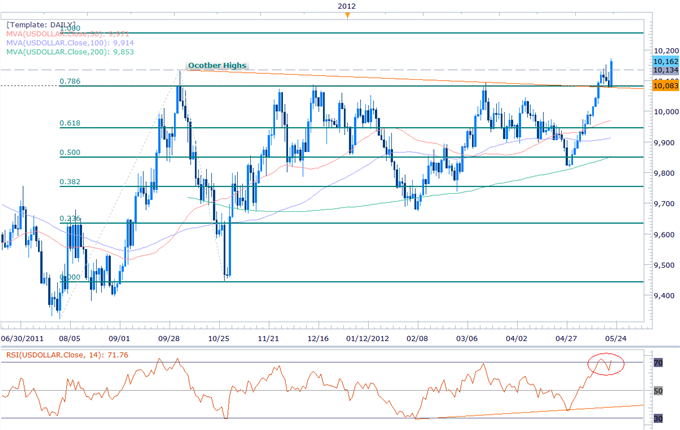 The greenback is markedly higher at the close of North American trade with the Dow Jones FXCM Dollar Index (Ticker: USDOLLAR) surging 0.80% on the session after moving nearly 186% of its daily average true range. The advance comes amid a lackluster performance in equity markets with US stocks closing weaker on the session after giving up early gains sustained on the back of a substantial advance in European markets. Remarks made by Greek Prime Minister Lucas Papademos rattled markets ahead of tomorrow’s EU summit after he cited that the nation was considering preparations for an exit from the euro zone. While the possibility (or in our opinion) probability of a Greek-Euro decoupling has been considered for some time now, Papademos’ comments further affirmed ongoing tensions within the periphery nation as the country struggles to form a cohesive government amid ongoing civil unrest. Risk sold-off sharply just ahead of the close with the Dow and the S&P closing virtually flat on the session while the NASDAQ slumped 0.29%.

The dollar rebounded sharply off key support cited yesterday at the confluence of trendline resistance dating back to October and the 78.6% Fibonacci extension taken form the August 1st and October 27th troughs at 10,084. We reserve this level as our bottom limit which if compromised negates our directional bias. The greenback has now closed above the October high at 10,134, marking the highest close on the index since January 12th 2011 and suggests that the rally may continue into the close of the month. Our medium-term objective is now eyed at the 100% extension at 10,255 with soft resistance seen just ahead at 10,185. Note that RSI has broken back into overbought territory and suggests the strength of the trend remains intact. 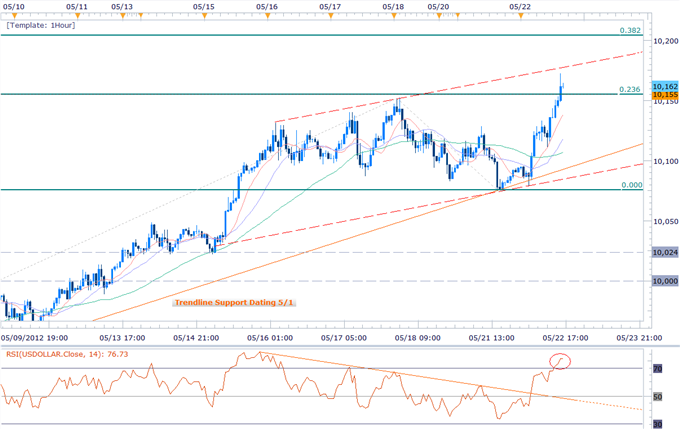 An hourly chart shows the index trading within the confines of a newly formed ascending channel formation with the greenback closing just below channel resistance at 10,162. Interim topside resistance now stands at the 38.2% Fibonacci extension taken from the April 30th and May 21st troughs at 10,205 and the 50% extension at 10,245. Initial support rests at 10,134 backed by channel support and the weekly low made yesterday at 10,076.

The greenback advanced against all four component currencies highlighted by a1.01% advance against the euro. The single currency remains at risk ahead of tomorrow’s EU summit where newly elected French President Francois Hollande will join European leaders for the first time as they discuss policy amid expectations of a Greek exit. While there are hopes that officials will be able to stem the threat of contagion, focus is also being shifted to France as a growing rift between German Chancellor Angela Merkel and Hollande is likely to fuel anti-austerity sentiment (one of the cornerstones of Mr. Hollande’ s presidential campaign.) The euro remains at risk at these levels with a break below the January lows at 1.2623 likely to give way to accelerated losses for the single currency.

The Sterling is the strongest performer of the lot with a loss of just 0.44% on the session. Key support at the 78.6% Fibonacci retracement taken from the mid-March advance at 1.5750 has offered support for the ailed pound after the free-fall seen off the 2012 highs made on April 30th at the 1.63-figure. While the correction off this high has been rather dramatic, sterling losses are likely to be rather tempered over the next 24-hours ahead of the BoE minutes where the report is likely to show another 8-1 split within the MPC to maintain the current monetary policy. Look for the dollar to remain well supported heading into Asia Pacific trade with the results of the EU summit likely to offer conviction on future dollar price action.