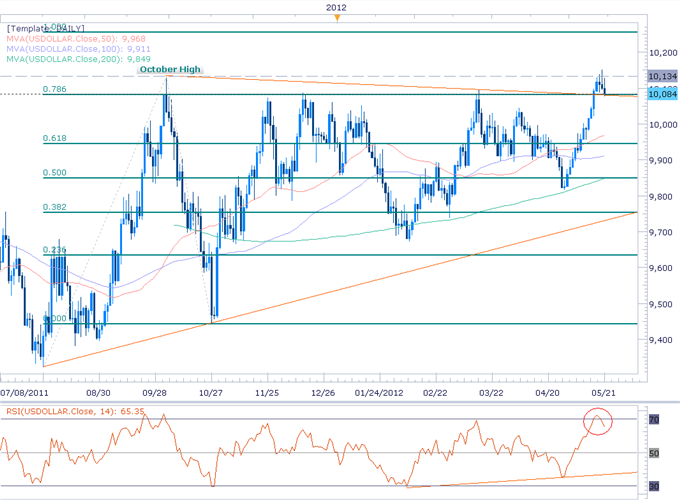 The greenback is softer at the close of North American trade with the Dow Jones FXCM Dollar Index (Ticker: USDOLLAR) off by 0.15% on the session after moving nearly 113% of its daily average true range. The losses come amid a strong rebound in broader risk assets with the Dow and the S&P snapping a six-day losing streak for a gain of 1.09% and 1.60% respectfully. The NASDAQ posted the largest advance with a gain of 2.46% on the session. We view the recent rally in risk as a technical bounce with further weakness expected as tensions in Europe continue to rise amid expectations of an inevitable euro-Greek decoupling. That said, we remain neutral at these levels with the index likely to offer more favorable long-entries lower.

The dollar closed just below the confluence of trendline resistance dating back to October and the 78.6% Fibonacci extension taken form the August 1st and October 27th troughs at 10,084. A break below this level risks further dollar losses with daily support eyed lower at the 50-day moving average at 9970, and the 61.8% extension at 9945. Resistance remains at the October highs at 10,134 with long-term targets eyed at the 78.6% extension at 10,255. Note that last week’s RSI breach above the 70-threshold was the first since early October and greenback may remain on the defensive in the near-term with pullback’s offering favorable long entries around the 10,000 mark. 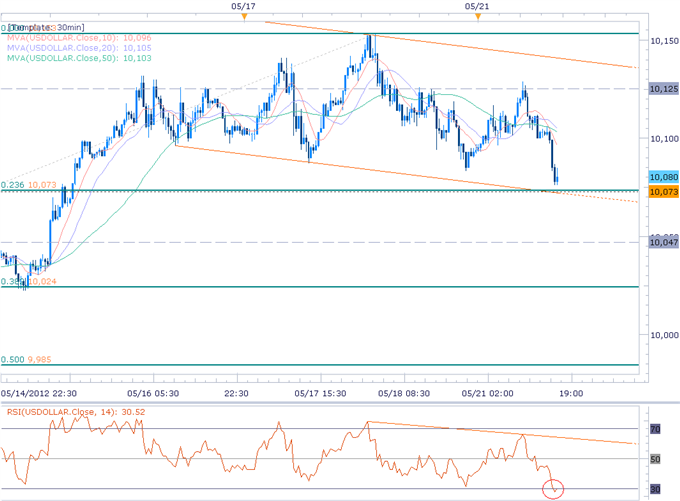 An hourly chart shows the index trading within the confines of a newly formed descending channel formation with the greenback closing just above interim support at the 23.6$ Fibonacci retracement taken from the early May advance at 10,073. A break below this level eyes soft support at 10,050 and the 38.2% retracement at 10, 024. Interim topside resistance stands at 10,125 and is backed by channel resistance and the 2012-high made last week at 10,154.

The greenback declined against three of the four component currencies highlighted by a 0.72% decline against the Australian dollar. A rebound in risk saw haven flows reverse with the AUD/USD mounting a counter-offensive off fresh 2012 lows below 9800. Look for the aussie to remain well supported in the short-term as markets push higher amid a lack of headlines out of Europe. The Japanese yen is the weakest performer of the lot with a loss of 0.40% on the session as traders jettisoned the low yielder in favor of risk. For a complete breakdown and detailed scalp levels on the NZDUSD and the USDJPY, refer to today’s Winners/Losers report. Look for the dollar to remain under pressure in the interim with a shift back into risk aversion likely to see the index make another run at the 2012-highs made last week.