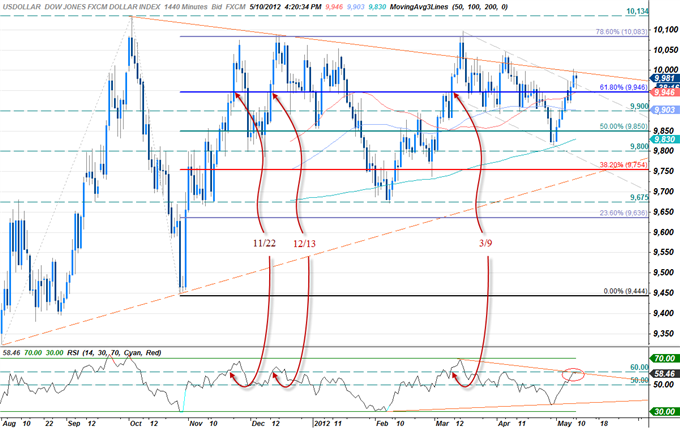 The greenback is fractionally softer at the close of North American trade with the Dow Jones FXCM Dollar Index (Ticker: USDOLLAR) off by just 0.06% on the session after moving nearly 78% of its daily average true range. The losses come the back of a modest rebound in risk appetite with stocks closing mixed on the session amid ongoing concerns regarding the deepening crisis in Europe. By the close of trade the Dow and the S&P were higher by 0.16% and 0.25% respectively with the NASDAQ closing lower by 0.04% on the session.

The dollar continues to hold below trendline resistance dating back to the October highs after breaking above channel resistance dating back to the March highs yesterday. Daily support now stands at the confluence of the 50-day moving average and the 61.8% Fibonacci extension taken from the August 1st and October 27th troughs at 9945. Topside resistance continues to stand at the psychological 10,000-mark with a breach above this level eyeing our next objective at the 78.6% extension at 10,080. Note that RSI has encountered resistance at the 60 mark as the dollar’s advance softened. A look at historical price action sees the dollar surging 1.4% - 1.5% in the days following an RSI breach above the 60-level. As such we will continue to eye the oscillator with a confirmed close above this level offering further conviction on our directional bias. 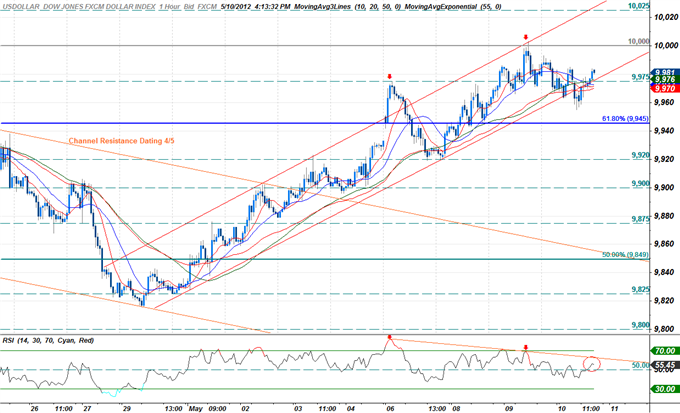 An hourly chart shows the index continuing to trade within the confines of an ascending channel formation after recovering from a brief break below channel support. Although the dollar recovered, we note that bearish RSI divergence has been identified with a break above RSI trendline resistance needed to alleviate further downside pressure. Interim topside resistance stands at the 10,000-mark backed by 10,025 and 10,040. A break back below this channel eyes the 61.8% extension at 9945 with subsequent floors seen at 9920 and 9900.

The greenback declined against three of the four component currencies highlighted by a 0.40% decline against the Australian dollar. A rebound in risk saw haven flows reverse with the aussie paring a portion of the steep declines seen over the past few sessions with the advance offering favorable short entries as we maintain our bearish bias on the high yielder. The Japanese yen is the weakest performer of the lot with a loss of 0.40% on the session. For a complete breakdown and detailed scalp levels on the AUDUSD and the USDJPY, refer to today’s Winners/Losers report. Our bias on the greenback remains weighted to the topside with pullbacks in the index offering favorable long entries. Only a break below the 9900-level invalidates our directional bias.