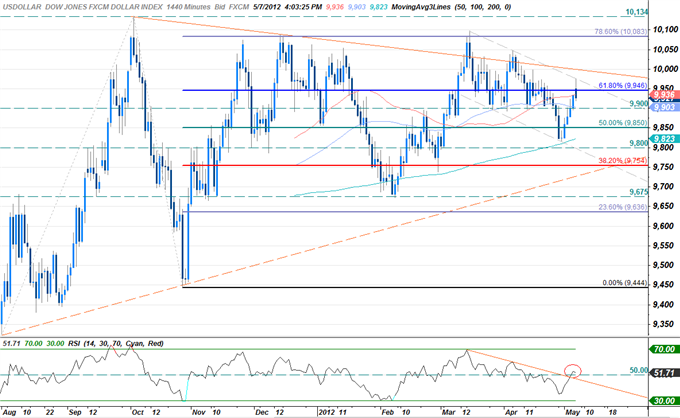 The greenback is fractionally softer at the close of North American trade with the Dow Jones FXCM Dollar Index (Ticker: USDOLLAR) off by just 0.06% on the session after moving nearly 115% of its daily average true range. Results of the French election dominated headlines today with Socialist leader François Hollande ousting conservative incumbent Nicolas Sarkozy, with risk sharply selling off at the Sunday open last night. Hollande has long been an opponent of strict austerity in times of economic crisis and his calls for change may have large implications on the euro as the region continues to face a prolonged recession. US equity markets struggled to pare early losses with the S&P and NASDAQ closing marginally higher by 0.04% and 0.05% respectively while the Dow ended lower by 0.23%. 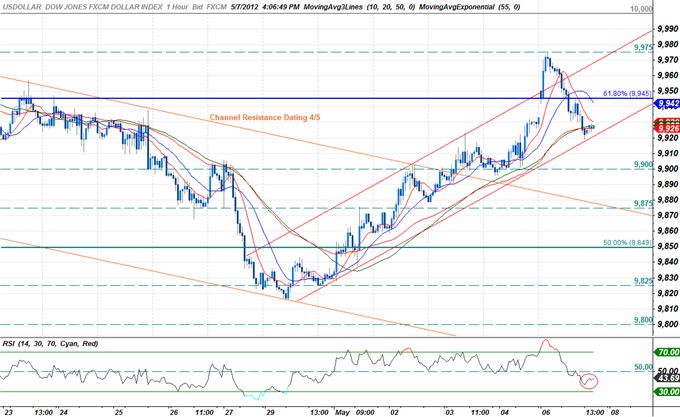 An hourly chart shows the index continuing to trade within the confines of a newly adjusted ascending channel formation after briefly breaking above at the weekly open. A break below channel support eyes subsequent floors at 9900, 9875, and the 50% extension at 9850. Interim resistance now stands with the 61.8% extension at 9945 backed by 9975, channel resistance, and the 10,000-mark. A breach above this level eyes our medium-term objective at the 78.6% extension at 10,080. Note that an RSI hold above 40 would bode well for further advances with a pullback of some magnitude likely after the five day rally seen last week.

The greenback advanced against two of the four component currencies highlighted by a 0.21% advance against the euro. While our bearish remains weighted to the downside, it’s important to note that the EURUSD short trade has become increasingly crowded with the single currency rebounding sharply off the February lows at 1.2974. Our primary objective on the euro remains 1.2865 with only a breach above the 1.3280 invalidating our directional bias. The sterling is the top performer of the lot with an advance of 0.27% on the session as the pound continues to gain haven status with the pair holding just below interim resistance at the 1.62-figure. For complete analysis and trade levels on the EURUSD and the GBPUSD refer to this morning’s Winners/Losers report. With a light US docket tomorrow look for the dollar to take cues off of broader market sentiment with ongoing pressure on the euro and the aussie (ahead of tonight’s Australian trade balance figures) likely to limit dollar losses in the interim.