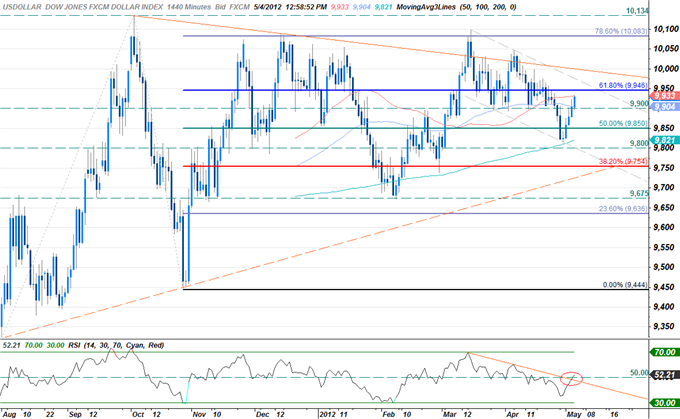 The greenback is markedly higher in North American trade with the Dow Jones FXCM Dollar Index (Ticker: USDOLLAR) advancing 0.28% on the session after moving nearly 76% of its daily average true range. April non-farm payrolls disappointed today with a print of just 115K, missing forecast estimates for a read of 160K. While the unemployment rate surprisingly declined to 8.1% from 8.2%, it’s important to note that the decline can largely be attributed to discouraged workers leaving the labor force with participation rate falling from 63.8% to 63.6%. Although the dollar initially came under pressure immediately following the print, renewed fears surrounding the European sovereign debt crisis propped up the dollar going into the end of the week. Rumors have emerged that commercial banks in Spain who met with the ECB requested another LTRO offering. Markets remained on the defensive heading into the close with the Dow, the S&P, and NASDAQ off by 1.20%, 1.46% and 2% respectively.

The dollar continues to trade within the confines of a descending channel formation dating back to the March highs with the index testing clearing the 100-day moving average at 9900 before entering resistance at the 50-day moving average at 9933. The advance marks the fifth consecutive day of gains for the index at the open of May trade and as seasonality trends dictate, bodes well for the greenback. While we remains bullish on the index, it’s important to note that we are still trading within a bearish structure with a breach above the 61.8% Fibonacci extension taken from the August 1st and October 27th troughs at 9946 offering further conviction on our directional bias. Daily support rests at 9900 backed by the 50% extension at 9850. Note that RSI has now breached trendline resistance dating back to the March highs with the move taking the oscillator above the 50-mark (typically a bullish signal). 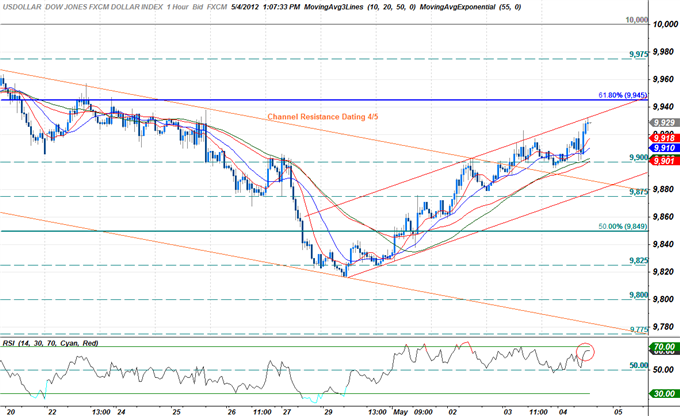 An hourly chart shows the index breaking above channel resistance dating back to April 5th with the dollar holding within the confines of a newly formed ascending channel formation. Note that the hourly RSI broke into overbought territory on May 1st for the first time since April 15th, with a series of subsequent breaches above the 70-mark supporting the channel break-out. As is often the case, multiple breaks into over-bought territory is healthy for bullish trends with holds above the 50-level suggesting the reversal off the April lows at 9816 may continue to gather pace. Interim support rests at 9900 backed by 9875 and the 50% extension at 9850. Topside resistance targets are eyed at the 61.8% extension at 9945 with subsequent ceilings seen at 9975 and the psychological 10,000 threshold.

The greenback advanced against three of the four component currencies highlighted by a 0.75% advance against the Australian dollar and a 0.50% advance against the euro. The single currency remains at risk ahead of general elections in Greece and France this weekend, with the EURUSD moving into bearish territory as daily RSI breaks below trendline support dating back to the 2012-lows and the exchange rate breaks below the 100-day moving average at 1.3117. Our medium-term objective remains the 1.30-figure with only a break above 1.3280 negating our bias. For outlooks and complete levels on the AUDUSD and the USDJPY refer to this morning’s Winners/Losers report. With a light economic docket next week, look for the dollar to take cues off broader market sentiment with the developments out of Europe likely to steer risk appetite early in the week.