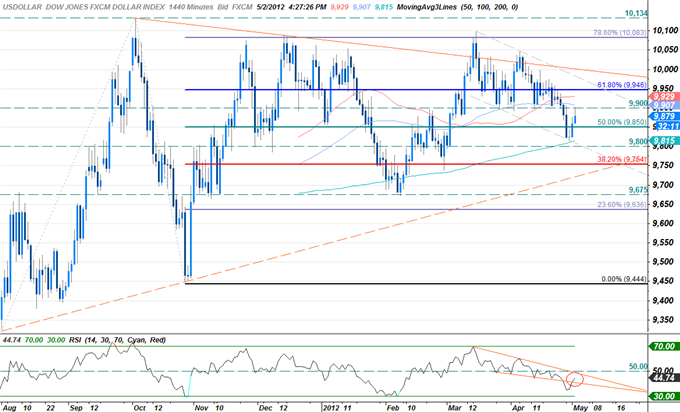 The greenback is firmer at the close of North American trade with the Dow Jones FXCM Dollar Index (Ticker: USDOLLAR) advancing 0.19% on the session after moving nearly 87% of its daily average true range. The gains come amid a mixed performance in US equity markets with a weaker-than-expected ADP employment report weighing on broader market sentiment early in the session. Although the ADP report triggered the initial sell-off in the US session, broader market sentiment was already dampened by a slew of dismal developments coming out of the European region. Rising finance costs in the periphery countries along with fears of a prolonged recession and record high unemployment sapped risk appetite ahead of the open. In turn, the flight to safety trade may gather pace over the next 24-hours should Spain’s three and five year debt auction stoke contagion fears. By the close of trade in New York, the Dow and the S&P were off by 0.08% and 0.25% respectively with the NASDAQ to closing higher by 0.31%.

The dollar continues to trade within the confines of a descending channel formation dating back to the March highs with the index testing key daily resistance at the 9900-level. This level has continued to be a critical pivot for the dollar and is backed closely by the 100-day moving average at 9907. A breach above this mark eyes daily targets at the 61.8% Fibonacci extension taken from the August 1st and October 27th troughs at 9946 and channel resistance. Daily support now rests with the 50% extension at 9850 backed by the 200-day moving average at 9815. Note that while RSI has now broken back above former trendline support, we look for a breach above trendline resistance dating back to the March highs with such a scenario offering further conviction on our directional bias. 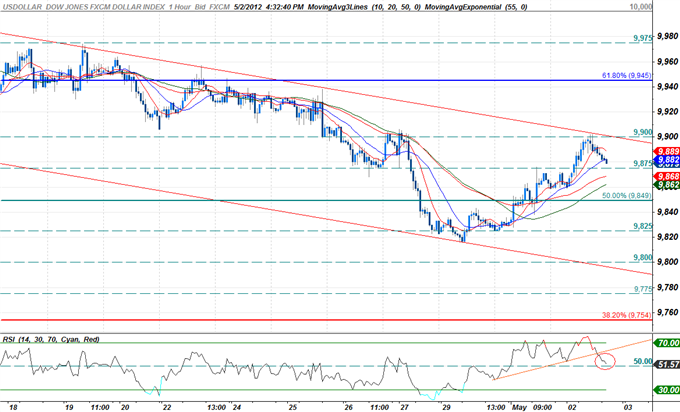 An hourly chart shows the index continuing to trade within the confines of a descending channel formation with the greenback closing just below the confluence of channel resistance and the 9900-mark. Note that a breach above this channel formation remains paramount for further dollar advances with subsequent topside intra-day targets are eyed at the 61.8% extension at 9945, 9975 and the psychological 10,000 threshold. Soft interim support rests at 9875 backed by the 50% extension at 9850 and 9825. Look for the correction seen at the tail end of the US session to soften with an RSI rebound off the 50-mark supporting further advances over the next 24-hours.

The greenback advanced against three of the four component currencies highlighted by a 0.60% advance against the euro. The single currency remains at risk ahead of tomorrow’s ECB interest rate decision. While the central bank is not expected to move on rates, investors will be looking to ECB President Mario Draghi for insight as to whether officials will look to carry its easing cycle into the second half of the year. For a complete outlook on tomorrow’s rate decision refer to the trade the news report. The Australian dollar was the top performer of the lot with the AUDUSD closing virtually flat on the session. The aussie has struggled to pare losses sustained on the back of the RBA interest rate decision amid speculation that the central bank is embarking on a series of rate cuts to support the fragile recovery. As such, we remain bearish on the pair with only a breach above the 1.0475 threshold negating our directional bias.

Tomorrow’s US economic docket is highlighted by the April ISM non-manufacturing composite with consensus estimates calling for a print of 55.3, down from a previous read of 56.0. Despite the implications of the print, reaction to the ECB rate decision is certain to steal the spotlight as the governments operating under the single currency continues to look for additional monetary support. Beyond the ECB, market volatility may thin ahead of the highly anticipated non-farm payrolls report as today’s dismal ADP print dampens expectations for stronger job growth. However, should NFPs top expectations, we may see the dollar rally across the board going into the end of the week as calls for further Fed easing subside.