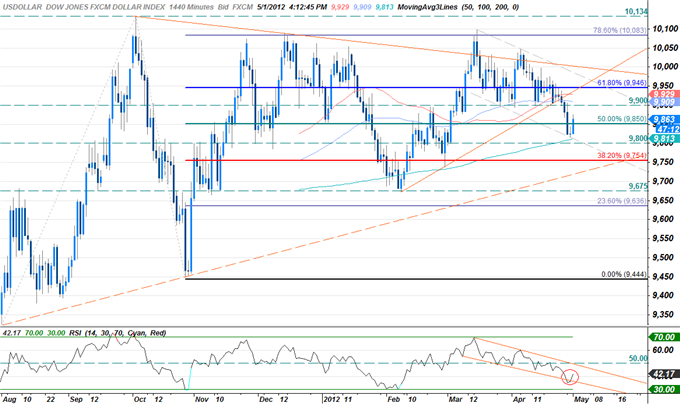 The greenback is stronger at the close of North American trade with the Dow Jones FXCM Dollar Index (Ticker: USDOLLAR) advancing 0.37% on the session after moving nearly 99% of its daily average true range. The advance comes despite broad gains in the equity markets with socks making their highs early in the session before paring gains to close well off session highs. Stronger than expected ISM manufacturing data ahead of the open topped estimates with a print of 54.8, versus expectations for a read of 53.0. The data helped support a rally in stocks that saw the Dow test levels not seen since December of 2007. The rally faded just an hour ahead of the close however with the Dow, the S&P, and NASDAQ closing higher by 0.50%, 0.57%, and 0.13% respectively.

The dollar continues to trade within the confines of a descending channel formation dating back to the March highs with the index breaking back above the 50% Fibonacci extension taken from the August 1st and October 27th troughs at 9850 before closing jus higher at 9863. Daily topside resistance stands at 9900 backed by the 61.8% extension at 9945 and channel resistance. Key daily support continues to rest with the 200-day moving average at 9813 backed by the confluence of channel support and the 9800 support level. 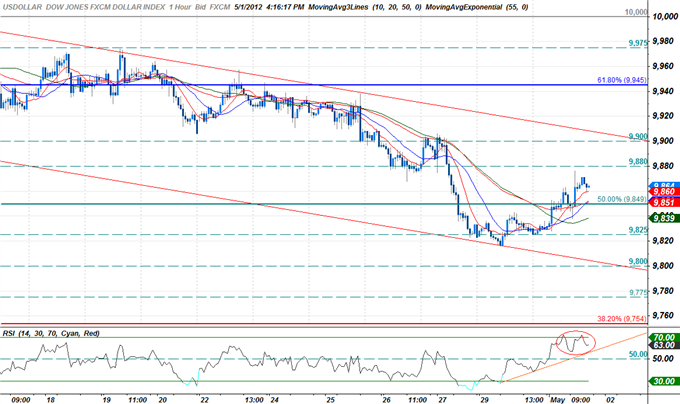 An hourly chart shows the index holding within the confines of a newly adjusted descending channel formation with the greenback closing just below soft resistance at 9880. Subsequent topside intra-day targets are eyed at 9900 with a breach above channel resistance eyeing the 61.8% extension at 9945. Interim support rests at 9850 backed by 9825 and 9800. Note that hourly RSI has now moved into overbought territory for the first time since April 16th and suggests further gains for the greenback in the days to come. While today’s advance marks the first day of the month and bodes well for the greenback, we look to tomorrow when European markets come back online. We remain neutral in the meantime pending a topside break of this descending channel formation.

The greenback advanced against all four component currencies highlighted by a 0.92% advance against the Australian dollar. The aussie remains under pressure after the RBA surprised markets with a 50 basis point interest rate cut last night with further losses expected so long as the 1.0475-level is respected. For complete AUDUSD targets refer to this today’s Winners/Losers report. The euro was the strongest performer of the lot with a loss of just 0.02% on the session. The single currency has remained rather resilient in the face of continued headline risk out of the region with the EURUSD now threatening channel resistance dating back to the February highs. A breach above critical resistance at the 1.33-figure risks further dollar losses with such a scenario eyeing targets above the 1.34-handle. Volatility on the euro is at its lowest levels since 2008 with the exchange rate holding a tight range as we hold just below channel resistance. Look for a breakout early in the month with the move likely to offer further clarity on directional bias for the single currency. Note that key employment data out of the US this Friday could be the catalyst needed to force the euro out of its recent tight range.

Tomorrow’s US economic docket is highlighted by the April ADP employment report with consensus estimates calling for the addition of 170K private sector jobs. As often is the case, traders will be looking to the ADP print as a barometer for Friday’s more encompassing non-farm payroll report. While the data has usually come more or less in line with the government’s employment data, it’s important to note that the ADP report is notorious for missing larger swings in NFPs as was seen in mid and late 2010. March Factory orders are released later in the day with consensus estimates calling for a contraction of 1.7%, down from a previous positive print of 1.3% a month earlier. We continue to stress monthly opening ranges on the dollar index with Friday’s key employment data likely to set the tone for the coming weeks.