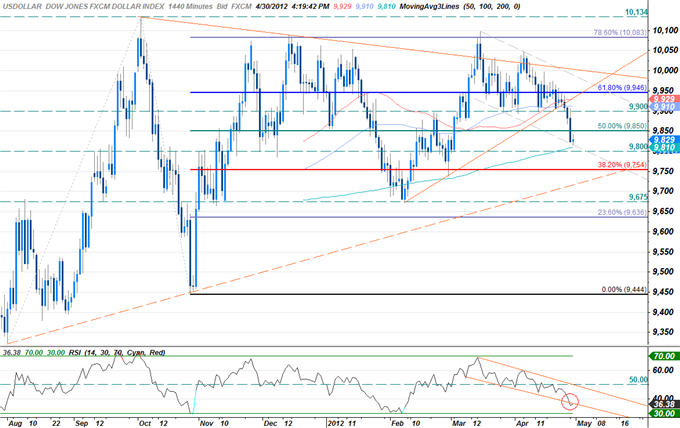 The greenback was modestly firmer at the close of North American trade with the Dow Jones FXCM Dollar Index (Ticker: USDOLLAR) advancing 0.08% on the session after moving just 55% of its daily average true range. The gains come on the back of a sell-off in risk with equity markets struggling to pair early losses throughout the session. 1Q GDP data out of Spain showed the economy shrinking by 0.4% and although the print was slightly stronger than consensus estimates, markets went on the defensive. GDP data out of Canada followed just ahead of the US open with the print coming in well below expectations at -0.2% m/m. A slew of mixed data out of the US did little to support broader market sentiment the greenback getting a pop in early US trade before eroding the gains throughout the session. Stocks were weaker at the close with the Dow, the S&P, and NASDAQ off by 0.11%, 0.39%, and 0.74% respectively.

The dollar continues to trade within the confines of a descending channel formation dating back to the March highs with the index rebounding off channel support in the session. Key daily support now rests with the 200-day moving average at 9810 backed closely by the 9800-mark. Topside resistance stands with the 50% Fibonacci extension taken from the August 1st and October 27th troughs at 9850 backed by the 9900-level. Note that RSI now looks poised for a break back above former trendline support with a move back above 9850 needed dispel further downside pressure. 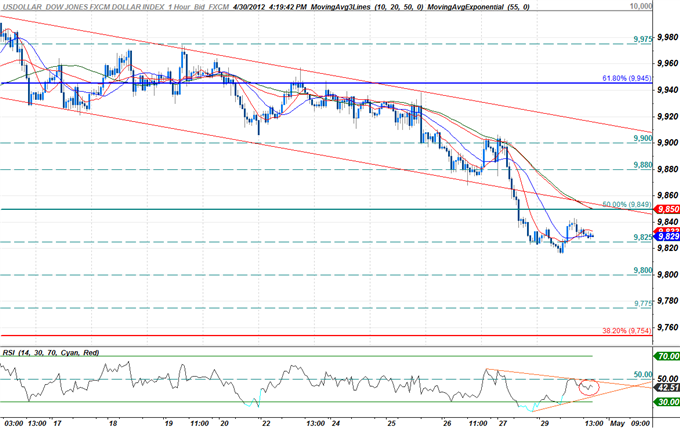 An hourly chart shows the index holding just above soft support at 9825 for the majority of the session with interim topside resistance targets seen at 9850, 9880 and 9900. A breach above former channel resistance puts us back on the long side with such a scenario eyeing targets at 9975 and the psychological 10,000 barrier. Support targets rest lower at 9800, 9775 and the 38.2% retracement at 9754. Note that RSI continues to consolidate into the apex of a wedge formation with pending break over the next 24-hours likely to offer further clarity on a directional bias.

The greenback advanced against three of the four component currencies highlighted by a 0.44% advance against the Australian dollar. The aussie remains at risk ahead of tonight’s RBA interest rate decision with central bank widely expected to cut the benchmark interest rate by at least 25basis points. While some are calling for a rate cut of 50 basis points, we find it more likely that the RBA will take a more moderate approach as signs of improvement in employment, manufacturing, and broader sentiment metrics may limit the central bank’s scope for a more aggressive cut. Nonetheless, with Credit Suisse overnight swaps now factoring in a 134% of a cut tonight, markets have largely priced in a 25bps cut and the aussie may continue to hold above key support at 1.0360. The Japanese yen is the top performer of the lot with an advance of 0.54% on the session. For complete daily and intra-day targets on the USDJPY refer to today’s Winners/Losers Report.

Tomorrow’s US economic docket is highlighted by the April ISM manufacturing report with consensus estimates calling for a print of 53.0, down from a previous read of 53.4. ISM prices paid is expected to show a similar decline with March construction spending seen rising by 0.4% m/m. The advance comes off a previous decline of 1.1% m/m and the stronger print could bode well for the depressed housing market which continues to weigh on US growth prospects. Look for the dollar to react favorably to positive prints tomorrow with the RBA interest rate decision and UK manufacturing PMI likely to steer broader market sentiment as traders look to Friday’s highly anticipated US non-farm payroll report.