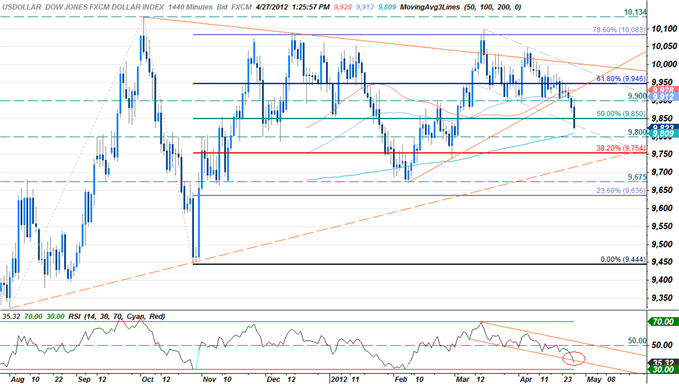 The greenback plummeted in North American trade today with the Dow Jones FXCM Dollar Index (Ticker: USDOLLAR) off by 0.60% on the session after moving a staggering 163% of its daily average true range. Weaker than expected 1Q GDP data this morning weighed heavily on the reserve currency which now searches for support after breaking below the key 9900 level earlier in the week. The data showed the US economy grew at an annualized pace of 2.2% q/q, missing consensus estimates which called for a print of 2.5% q/q. The data comes on the heels of Wednesday’s FOMC rate decision where the central bank upgraded its growth, inflation, and employment forecasts while Chairmen Ben Bernanke reaffirmed the Fed’s commitment to “do more” should conditions deteriorate. The remarks fueled expectations for further easing with today’s disappointing GDP print sending the dollar substantially lower as investors flocked into the high yielders at the expense of the reserve currency. Equity markets pared early losses with the Dow, the S&P, and NASDAQ all trading higher in afternoon trade.

The dollar broke below the 50% Fibonacci extension taken from the August 1st and October 27th troughs at 9850 early in the session with the index trading just below channel support at 2pm in New York. If this level is compromised (on a close basis), look for further declines with such a scenario eyeing daily support at the 200-day moving average just above the 9800-level. Note that an RSI break below trendline support confirms the move below 9850 and adds to the bearish tone. 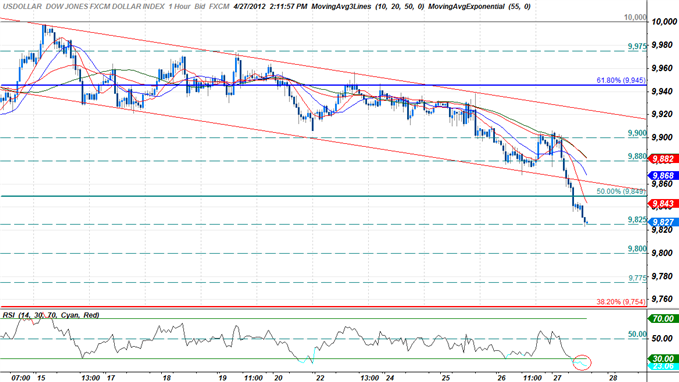 An hourly chart shows the index breaking below channel support dating back to April 4th with the dollar currently holding just above soft support at 9825. Subsequent floors are seen at 9800, 9775, and the 38.2% extension at 9754. Interim topside resistance stands with the 50% extension at 9850 backed by 9880 and the key 9900 level. Note that RSI remains in extreme oversold territory with a pullback of magnitude likely before continuing lower.

The greenback declined against all four component currencies highlighted by a 0.76% decline against the Australian dollar. The aussie broke above key resistance at the confluence of the 200-day moving average and channel resistance dating back to March 6th at 1.0360 on Thursday with the pair trading just shy of the 1.05-figure ahead of the US close on Friday. Traders will be closely eyeing next week’s RBA rate decision with the central bank widely expected to cut the benchmark interest rate as strains in the housing and employment markets continue to weigh on the economy. However with Credit Suisse overnight swaps already factoring in a 132% chance of a 25basis point cut, the effect of the policy change may be largely priced in at this point with risk to the aussie remaining weighted to the topside. The euro was the weakest performer of the lot with an advance of just 0.35% despite broad dollar losses. For complete analysis and key levels on the euro, refer to this morning’s Winners/Losers Report. Note that with the close of the month approaching on Monday, we remain neutral at these levels with the May opening range likely to offer further clarity on a directional bias as seasonality trends dictate.