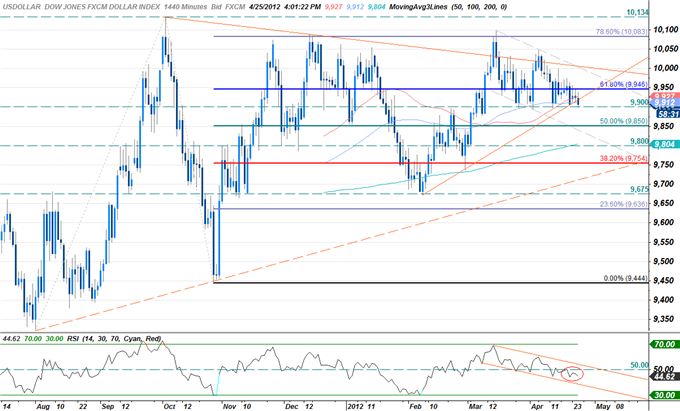 The greenback is softer at the close of North American trade with the Dow Jones FXCM Dollar Index (Ticker: USDOLLAR) off by 0.18% on the session. The FOMC interest rate decision was central focus today with the central bank maintaining its pledge to keep rates anchored through 2014 while giving a slightly more upbeat assessment of the economy. The Fed raised its 2012 growth forecast to 2.4%-2.9% from 2.2%-2.7% with unemployment expected to improve to 7.8%-8.0% from a previous forecast 8.2%-8.5%. The policy statement also noted that while higher energy prices, “earlier this year is expected to affect inflation only temporarily, the Committee anticipates that subsequently inflation will run at or below the rate it judges most consists with its dual mandate.” Projections from the 17 FOMC members were well distributed with seven members expecting rate hikes in 2014 while six members expected pre-2014 hikes and four saw rates on hold until 2015. The dollar was well supported until Bernanke took the stage with the greenback paring early gains as the Chairman cited “We remain prepared to do more.” While it’s highly unlikely that the Fed will actually undertake another round of quantitative easing, the remarks were enough to weigh on the greenback as equities moved higher. As markets take solace in the fact that the Fed remains open to “do more” it’s important to note as US metrics continue to improve, the central bank will find it increasingly difficult to justify further market interventions, with today’s rhetoric seen as a simple ploy to calm investor concerns as the central bank reiterates its pledge to backstop the economy. The major stock indices closed near session highs with the Dow, the S&P, and NASDAQ advancing 0.69%, 1.36% and 2.30% respectively.

The dollar closed just above critical daily support at 9900 despite closing just below trendline support dating back to the 2012 lows. 9900 remains paramount for the greenback with a break below risking substantial losses for the reserve currency. Such a scenario eyes daily support at the 50% Fibonacci extension taken from the August 1st and October 27th troughs at 9850. Topside resistance stands with the 61.8% extension at 9945 backed by channel resistance, currently just shy of the 10,000 mark. 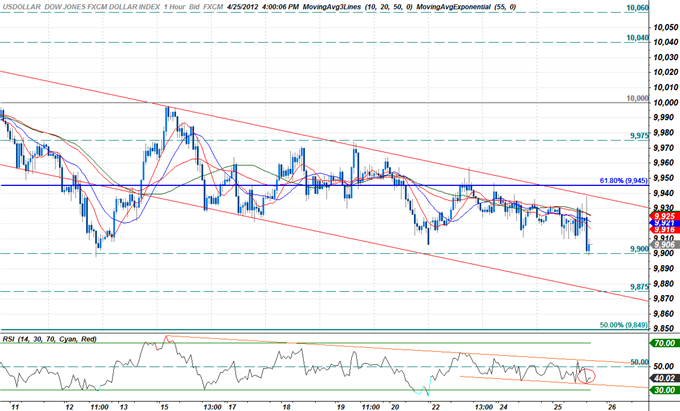 An hourly chart shows the index continuing to trade within the confines of a descending channel formation dating back to April 4th with the dollar continuing to hold below the 61.8% extension at 9945. Subsequent intra-day resistance targets are seen at 9975, 10,000, and 10,040 with key daily support holding steady at 9900 backed by 9875 and the 50% extension at 9850. Note that RSI has continued to hold a tight range below the 50-mark with a breach above trendline resistance dating back to April 15th needed to alleviate further downside pressure.

The greenback declined against three of the four component currencies highlighted by a 0.39% decline against the Australian dollar. The commodity bloc was well supported today as broader risk appetite improved with the high yielders advancing at the expense of the dollar. For complete AUDUSD scalp targets refer to last week’s Scalp Report. The Japanese yen was the weakest performer of the lot with a fractional decline of 0.04% as traders trimmed yen holdings ahead of the BoJ interest rate decision later this week with speculation circulating that the central bank will look to increase the size of its asset purchase program as officials pledge achieve the 1% inflation target. Our medium-term outlook for the USDJPY remains weighted to the topside with the pair likely to re-test the 2012 highs above the 84-handle.

Tomorrow’s US economic docket is highlighted by weekly jobless claims and March pending homes sales. Claims are expected to ease to 375K with continuing claims expected to fall to 3280K from nearly 3300K. On the housing front, growth in pending home sales on an annual basis is expected to slow substantially with consensus estimates calling for a print of 7.9% y/y, down from a previous read of 13.9% y/y. Look for dollar price action to take cues off broader market sentiment with a break below 9900 shifting our focus lower.