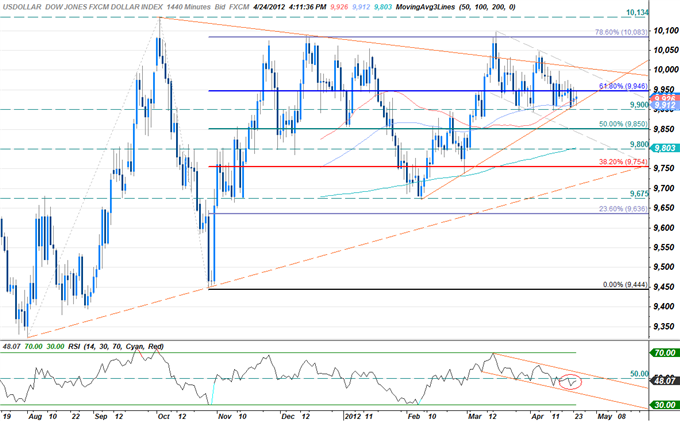 The greenback is firmer at the close of North American trade with the Dow Jones FXCM Dollar Index (Ticker: USDOLLAR) advancing 0.04% on the session. The gains come amid a mixed performance in US equities with the Dow and the S&P advancing 0.58% and 0.37% respectively while the NASDAQ lagged with a loss of 0.30% on the session. All eyes now turn to tomorrow’s central bank rate decision with investors eagerly anticipating the quarterly economic and interest rate projections from the 17 FOMC members. We will be closely eyeing the accompanying statement with any change to the “late 2014” pledge to keep rates anchored likely to support the greenback.

The dollar continues to hold just above the confluence of trendline support dating back to the 2012-lows and the 100-day moving average at 9912. The 9900 level remains paramount for the greenback with a break below risking substantial losses for the reserve currency. Such a scenario eyes key daily support at the confluence of the channel support and the 50% Fibonacci extension taken from the August 1st and October 27th troughs at 9850. Topside daily resistance stands with the 61.8% extension at 9945 with a breach above this level eyeing channel resistance at the psychological 10,000-mark. 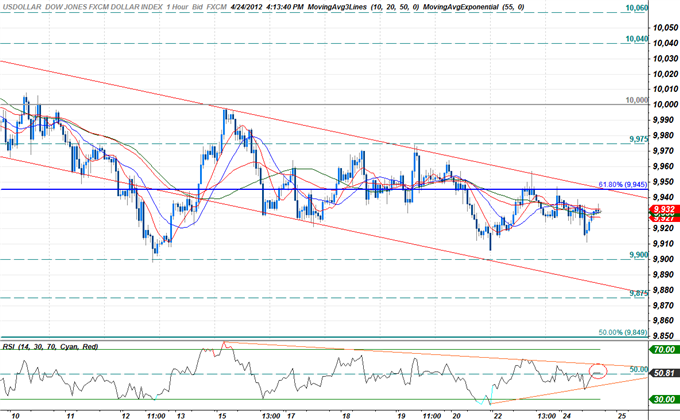 An hourly chart shows the index continuing to trade within the confines of a descending channel formation dating back to April 4th with the dollar closing just below the 61.8% extension at 9945. Subsequent intra-day resistance targets are seen at 9975, 10,000, and 10,040 with key daily support holding steady at 9900 backed by 9875 and the 50% extension at 9850. Note that RSI has continued to consolidate into the apex of wedge formation with a pending breakout over the next several hours likely to offer further clarity on an intra-day bias. Look for the dollar to remain rather subdued ahead of tomorrow’s crucial FOMC interest rate decision with the greenback likely to take cues off the accompanying statement as well as the forecasts of the 17 members.

The greenback advanced against two of the four component currencies highlighted by a 0.25% advance against the Australian dollar. Weaker than expected inflation data out of Australia last night has seemingly solidified expectations for the RBA to cut interest rates next month with the AUDUSD pair likely to remain under pressure. For complete aussie scalp targets refer to this morning’s Winners/Losers Report. The euro is the top performer of the lot with an advance of 0.24% on the session. A successful bond auction in the Netherlands temporarily eased debt concerns after budget talks collapsed over the weekend with the Dutch Prime Minister Mark Rutte resigning as a result. Coupled with the rebound in broader market sentiment, the advance in the single currency is likely to be short lived with our medium-term bias remaining weighted to the downside.

Tomorrow’s FOMC interest rate decision will be central focus for markets with the central bank widely expected to keep the benchmark interest rate at 0.25%. Traders will be closely eyeing the accompanying statement with the quarterly projections by individual Fed members likely to steal the spotlight tomorrow. For a complete breakdown of tomorrow’s FOMC rate decision and the implications for the dollar, refer to today’s Trade the News Report.