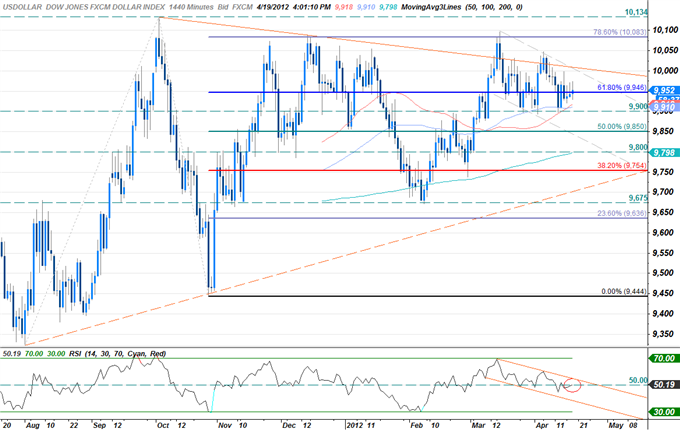 The greenback is firmer at the close of North American trade with the Dow Jones FXCM Dollar Index (Ticker: USDOLLAR) advancing 0.09% on the session. The gains come on the back of a sell-off in broader risk assets with US stocks taking cues from sharp declines in European trade. Although today’s Spanish bond auction was well received, yields remained elevated with 10-year climbing to 5.743% compared to the 5.403% in January. Weaker than expected weekly jobless claims and disappointing report on existing home sales added to the downside pressure with the Dow, the S&P, and NASDAQ off by 0.53%, 0.59% and 0.79% respectively. 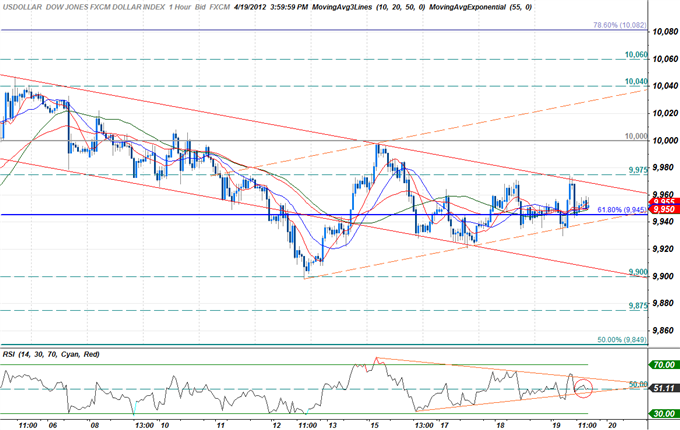 An hourly chart shows the index continuing to trade within the confines of a descending channel formation dating back to April 4th with the dollar closing just above the 61.8% extension at 9945. A breach above channel resistance eyes subsequent topside targets at 9975, 10,000, and 10,040. Note that we may be in the confines of a newly forming ascending channel formation (dashed channel lines) with a break below channel support exposing critical support at 9900. A break below this level risks substantial losses for the reserve currency with such a scenario eyeing targets at 9875 and the 50% extension at 9850. Note that RSI continues to consolidate into the apex of a wedge formation with a break out over the next several hours likely to offer further clarity on an intra-day directional bias.

The greenback advanced against two of the four component currencies highlighted by a 0.39% advance against the Japanese yen. The low yielder is weaker against all its major counter-parts today and it seems that the yen correction may have run its course. As such look for the low yielder to come under increased pressure with a breach above the 82-figure with medium-term targets eyed at the March highs around the 84-handle. The aussie also came under pressure today with a loss of 0.22% as the risk sell-off weighed on higher yielding assets. For comprehensive outlook and scalp levels on the AUDUSD refer to this week’s Scalp Report. The British pound is the top performer of the lot with an advance of 0.21% against the dollar. The sterling has remained well supported with remarks made by MPC member Adam Posen further fueling expectations that the BoE is moving away from its easing cycle. From a technical standpoint the sterling remains within the confines of an ascending channel formation dating back to the January lows with our medium-term bias remaining weighted to the topside. For complete scalp targets on the GBPUSD refer to today’s Winners/Losers Report. With no data on tomorrow’s US economic docket, look for the dollar to take cues off broader market sentiment with a continued move into risk aversion likely to keep the greenback supported.