USD Index Resilient Despite Broader Rally in Risk- Bullish Above 9900 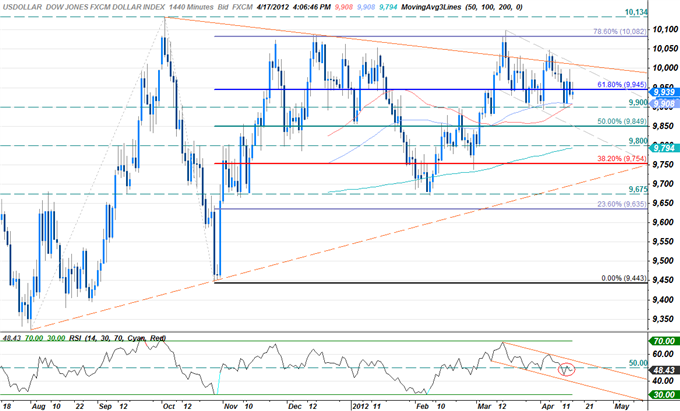 The greenback is virtually unchanged at the close of North American trade with the Dow Jones FXCM Dollar Index (Ticker: USDOLLAR) fractionally higher by 0.02% on the session after moving just 69% of its daily average true range. The lackluster performance in the dollar comes amid a massive rally in broader risk assets with equity markets closing substantially higher on the day. Helping support the rebound in risk appetite was a well bid Spanish bond auction which temporarily ease European debt concerns and stronger than expected US corporate earnings. The IMF also raised its outlook for global growth to 3.5% for 2012 with the 2013 forecast expected to top 4% as expansion in economies such as China, India and Brazil fueled the global recovery. The fund did however warn that the European debt crisis and spikes in crude do have the potential to derail the fragile recovery. Broader market sentiment was well supported nonetheless with the Dow, the S&P, and NASDAQ closing near session highs for gain of 1.50%, 1.55%, and 1.82% respectively.

The fact that the dollar remained rather well supported in the face today’s rally in broader risk bodes well for the reserve currency which continues to hold above critical support at 9900. This level remains paramount for the greenback with confluence of the 100 and 50-day moving averages resting just higher at 9908. The index has continued to straddle the 61.8% Fibonacci extension taken from the August 1st and October 27th troughs at 9945 with RSI continuing to straddle the 50-mark. We remain cautiously bullish on the index so long as the 9900 support level is respected with a topside break of the descending channel formation dating back to the February highs (currently around 10,000) needed to dispel further downside pressure. Such a scenario eyes targets at our primary objective at the 78.6% extension at 10,080. 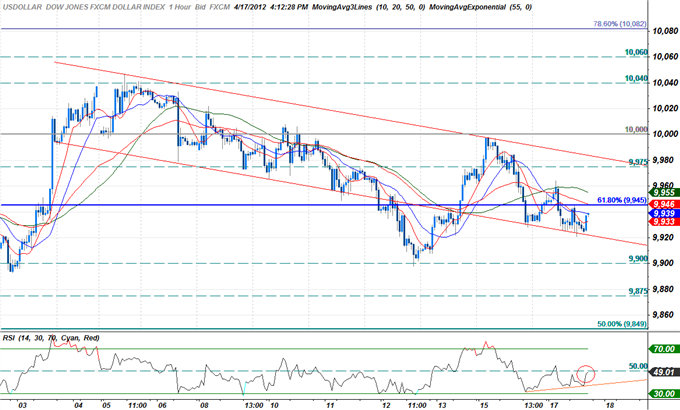 An hourly chart shows the index continuing to trade within the confines of a descending channel formation dating back to April 4th with the dollar closing just below the 61.8% extension at 9945. Interim resistance stands here with a breach eyeing targets at 9975, the psychological 10,000-mark, and 10,040. A break below channel support exposes key support at 9900 which if compromised risks moves down to 9875 and the 50% extension at 9850. Bullish divergence in the relative strength index suggests the index may look to move higher over the next 25 hours. Look for an RSI break above 50 to possibly fuel the dollar with enough momentum to breach channel resistance.

The greenback advanced against two of the four component currencies highlighted by a 0.60% advance against the Japanese yen. The low yielder remained under pressure for the bulk of the session as risk on flows saw traders jettison the “haven” currency in favor of risk. For complete USD/JPY scalp targets refer to today’s Winners/Losers Report. The Australian dollar is the top performer of the lot with an advance of 0.42% as the aussie followed broader risk trends in classic form. We remain bearish on the aussie so long as the monthly high at 1.0465 is respected with our initial downside objective eyed at 1.0240. As market sentiment continues to dictate price action in the currency market we will look to broader risk trends for direction amid the lack of event risk.