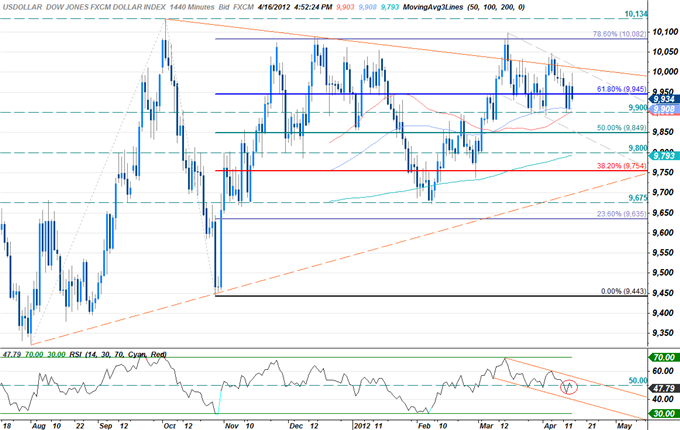 The greenback is markedly weaker at the close of North American trade with the Dow Jones FXCM Dollar Index (Ticker: USDOLLAR) off by 0.57% on the session after moving a full 115% of its daily average true range. Equity markets were mixed at the close as headlines out of Europe and mixed US economic data weighed on stocks with the S&P and NASDAQ off by 0.05% and 0.76% respectively while the Dow climbed higher by 0.56%. Remarks made by Cleveland Fed President Sandra Pianalto were surprisingly less dovish than expected with the central banker citing the need for the Fed to take “balanced approach” to an exit strategy while noting that the economy continues to display, “forward momentum.” Despite the remarks from Pianalto, a known dove, the dollar remained on the defensive with its European counter-parts outperforming early in the week.

The dollar closed back below the 61.8% Fibonacci extension taken from the August 1st and October 27th troughs at 9945. The index has continued to straddle this level for the past few sessions with key daily support seen at the relative three way confluence of the 50 & 100-day moving averages and the 9900 support level. This level remains paramount for the greenback with a break below eyeing support targets at the 50% extension at 9850. Daily topside advances are limited by channel resistance dating back to the 2012 high, currently just above the psychological 10,000 level. Note that the relative strength index continues to trade within the confines of a descending channel with a topside break needed to dispel further dollar weakness. 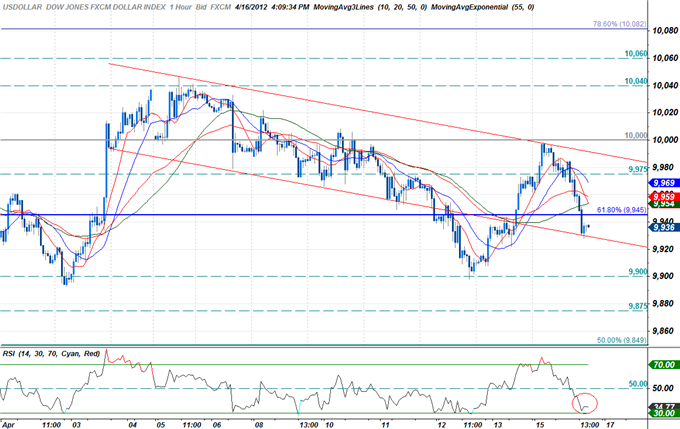 An hourly chart shows the index trading back in the confines of a descending channel formation after briefly dipping below channel support late last week. A break below this formation eyes subsequent floors at 9900, 9875, and the 50% extension at 9850. Interim resistance stands at the key 61.8% extension at 9945 backed by 9975 and channel resistance. A breach above the 10,000 mark shifts our focus higher with such a scenario eyeing primary objectives at 10,040 and the 78.6% extension at 10,080. Look for the dollar to take cues off broader risk trends as the European crisis comes back into focus with a substantial shift into risk aversion likely to offer ample support for the reserve currency.

The greenback declined against three of the four component currencies highlighted by a 0.58% decline against the Japanese yen. The USD/JPY has remained under pressure since last week when the BoJ yielded no plans to further ease policy. Risk aversion flows have also continued to support the low yielder as traders flock into so called “haven” assets such as the yen, the greenback, and US Treasuries. For complete USD/JPY scalp targets refer to today’s Winners/Losers Report. The Australian dollar was the weakest performer of the lot with a decline of 0.16% on the session. Although the greenback saw broad-based losses against its European counterparts like the pound, the euro and the swissie, commodity backed currencies remained on the defensive with the aussie, the kiwi, and the cad all closing weaker on the session. Global growth concerns continue to limit advances in the commodity bloc with the greenback well supported in the interim. Traders will be closely eyeing the minutes from the most recent RBA interest rate decision with our medium-term bias on the aussie remaining weighted to the downside.

Tomorrow’s economic docket is highlighted March housing starts, building permits, manufacturing production and industrial production data. Traders will be closely eying the housing data as the sector continues to drag on the economy with housing starts expected to rise to 1.0% m/m, up from a previous contraction of 1.1% m/m. Building permits are expected to remain under pressure with consensus estimates calling for a decline of 0.6% m/m, down from a previous gain of 5.1% m/m. We remain neutral on the greenback at these levels while noting that our longer-term outlook remains weighted to the topside. However in light of recent price action, further declines in the index are likely with such a scenario to offer favorable long entries.