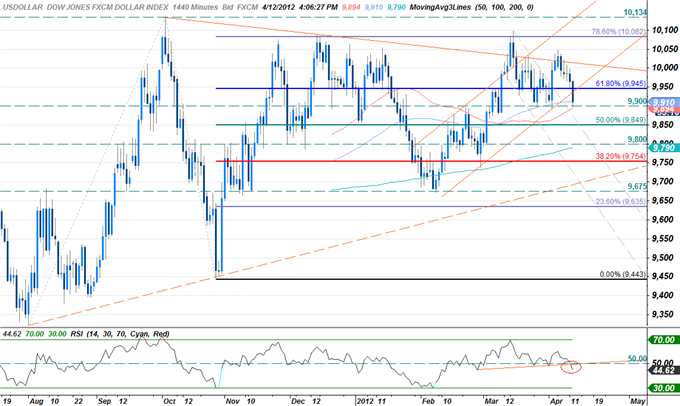 The greenback is markedly weaker at the close of North American trade with the Dow Jones FXCM Dollar Index (Ticker: USDOLLAR) off by 0.57% on the session, marking the fourth largest single day decline this year. The losses come on the back of a substantial rally in risk assets that saw stocks rally for a second consecutive session as remarks made by Fed members Yellen and Dudley fueled speculation for further central bank easing. Weaker-than-expected weekly jobless claims data further reinforced softness in the labor market after Friday’s disappointing NFP print re-ignited the QE debate. Compounding the bullish sentiment were ongoing rumors regarding tonight’s China GDP print with whispers of a read as strong as 9% easing concerns over a slowdown in the world’s second largest economy. While it’s unlikely the data will come in quite that strong, markets rallied throughout the session as risk sentiment continued to gather pace on the back of yesterday’s advance. Stocks closed at session highs with the Dow, the S&P, and NASDAQ surging 1.41%, 1.38%, and 1.30% respectively.

The dollar broke through key daily support the confluence of the 61.8% Fibonacci extension taken from the August 1st and October 27th troughs and channel support at 9945 before closing just ahead of the 100-day moving average at 9910. Daily support now rests at 9900 backed by the 50% extension at 9850 with only a break back above 9945 alleviating further downside pressure for the reserve currency. Note that today’s decline was confirmed by an RSI break below trendline support and suggests that the greenback may yet see further losses. 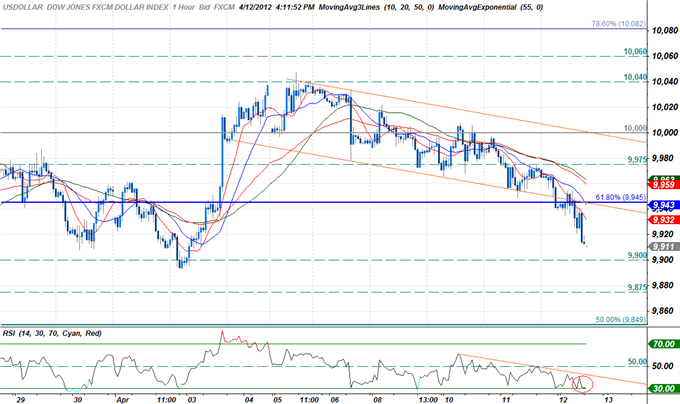 An hourly chart shows the index breaking below a descending channel formation dating back to April 4th with the dollar closing just above interim support at 9900. As noted in yesterday’s USD Trading Report, the break below 9945 now negates our interim bullish bias with subsequent intra-day support targets seen at 9875 and the 50% extension at 9850. Interim resistance now stands at 9945 backed by 9975and the psychological 10,000-mark.

The greenback declined against all four component currencies highlighted by a 1.30% decline against the Australian dollar. Stronger-than-expected employment data out of Australia in overnight trade fueled a massive rally in the high yielder which broke through key daily resistance targets in early US trade. The Japanese yen was the weakest performer of the lot with an advance of just 0.01% despite broad-based dollar losses. For complete analysis and scalp targets on the AUDUSD and USDJPY, refer to today’s Winners/Losers Report.

Tomorrow’s economic docket is highlighted by the March CPI print and the University of Michigan confidence surveys. Consensus estimates call for inflation to ease to an annual rate of 2.7%, down from a previous read of 2.9% y/y with core prices seen holding steady at 2.2% y/y. While the headline print is expected to soften, stickiness in core prices may limit the Fed’s scope to embark on further easing measures as the rate continues to hold above the 2% target set forth by the central bank in January. Ahead of these key data prints lies the Chinese GDP release tonight at 10pm ET (02:00 GMT). Investors will be closely eyeing the data amid ongoing concerns of a hard landing with a stronger print likely to further support the recent rally in risk at the expense of the greenback.