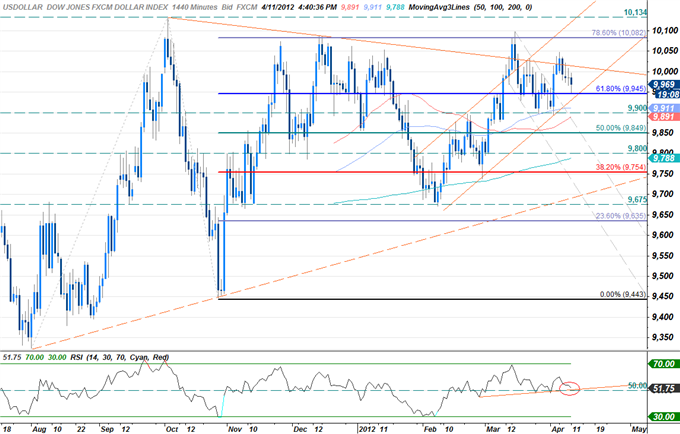 The greenback is softer at the close of North American trade with the Dow Jones FXCM Dollar Index (Ticker: USDOLLAR) off by 0.18% on the session. The losses come amid a rebound in risk-appetite with US and European equity markets closing markedly higher on the session as stocks snapped a 5-day losing streak. An upbeat start to the earnings season and Fed’s Beige Book eased investor concerns as the Fed’s twelve districts reaffirmed economic activity from mid-February to late-March had expanded at a “modest to moderate pace.” The dollar remained under pressure today as traders chased yields with the Dow, the S&P and NASDAQ advancing 0.70%, 0.74% and 0.84% respectively.

The greenback closed off session lows today after rebounding of key daily support at the 61.8% Fibonacci extension taken from the August 1st and October 27th troughs at 9945. A slight adjustment to our channel shows the convergence of the extension with channel support dating back to the February 29th low. This level remains paramount for the dollar with a break below eyeing critical support at 9900. Note that daily RSI continues to trade above trendline support with a break below the convergence of the 50-mark risking substantial losses. Look for the dollar to remain on the defensive with only a breach above the 10,000 mark likely to alleviate some of the downside pressure for the reserve currency. 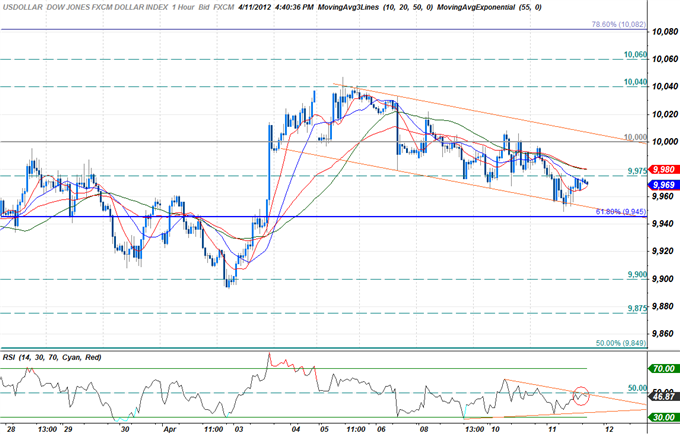 An hourly chart shows the index trading within the confines of a descending channel formation with the dollar closing just below interim support at 9975. Subsequent intra-day resistance targets are eyed at the psychological 10,000-mark, 10,040, and 10,060 with key daily resistance seen at the 78.6% extension at 10,080. Interim support rests at the confluence of the 61.8% extension and channel support at 9945 with a break here exposing floors at 9900, 9875, and the 50% extension at 9850. Our medium-term outlook on the index remains weighted to the topside with a break below 9945 negating our bias in the interim.

The greenback fell against three of the four component currencies highlighted by a 0.48% decline against the Australian dollar. The high yielder remained well supported throughout the session as the AUDUSD rebounded off key daily support at 1.0240. For complete aussie scalp targets ahead of tonight’s crucial employment data, refer to today’s Trade the News Report. The yen was the weakest performer of the lot with a decline of 0.26% against reserve currency despite broader dollar losses. As expected, yen losses have continued to outpace those of the greenback on clear risk-on days such as today with the yen paring a fraction of the massive advance seen off the March lows around the 84-figure. For complete scalp targets on the USDJPY refer to today’s Winners/Losers Report.

Tomorrow’s economic docket is highlighted by the February trade balance and March producer prices. The trade balance is expected to show a modest decrease in the deficit to -$52.0B from a previous read of -$52.6B. Meanwhile, producer prices are widely expected to ease for the month of March with consensus estimates calling for a print of 3.0% y/y, down from 3.3% y/y with core prices seen easing to 2.8% y/y from 3.0% y/y. Traders will be closely eyeing the core print as this is the data the Fed takes into consideration when assessing changes in monetary policy.