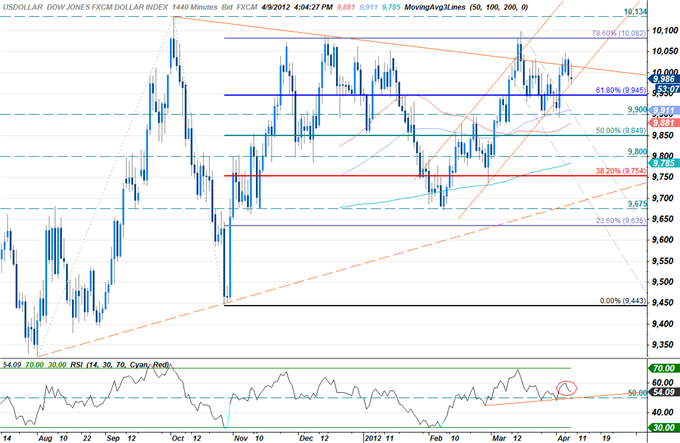 The greenback is fractionally softer at the close of North American trade with the Dow Jones FXCM Dollar Index (Ticker: USDOLLAR) off by 0.10% on the session. The losses come on the back of another sell-off in stocks which reacted to Friday’s disappointing NFP print. Expectations for the addition of 205K were grossly overestimated with the data coming in at just 120K for the month of March. Although the unemployment rate ticked down to 8.2% from 8.3%, the decline can largely be attributed to discouraged workers leaving the labor force which in turn puts downside pressure on the unemployment rate. While the data is by no means justification for further Fed easing, speculation of another round of easing has limited dollar advances in the interim despite the broad-based risk sell-off seen in US trade today. By the close of trade in New York all three major indices were sharply lower with the Dow, the S&P, and NASDAQ off by 1.00%, 1.14%, and 1.08% respectively.

The dollar continues to trade within the confines of an ascending channel formation with the index testing trendline support just ahead of the close. While our medium-term bias on the greenback remains weighted to the topside, again we note that dollar advances may be limited in the interim as whispers of further Fed easing weigh on demand for the reserve currency. The correction may gather pace with a break below channel support eyeing key daily support targets at the 61.8% Fibonacci extension taken from the August 1st and October 27th troughs at 9945 and 9900. A break below this level coupled with a break below RSI support negates our bias with such a scenario eying the 50% extension at 9950. 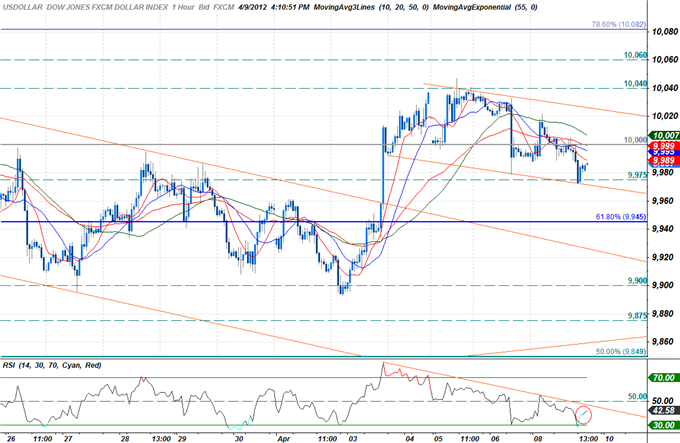 An hourly chart shows the index trading within the confines of a newly formed descending channel formation with the dollar rebounding off soft support at 9975. Subsequent intra-day floors are seen at the 61.8% extension at 9945, former channel resistance and 9900. A topside break of the channel alleviates some of the pressure with topside resistance targets seen at 10,040, 10,060, and the 78.6% extension at 10,080. Look for the dollar to possibly drift lower before mounting its assault with dips in the index offering favorable long entries.

The greenback fell against all four component currencies highlighted by a 0.21% decline against the British pound. Despite the sterling’s pullback off the 1.60-figure, our medium-term bias remains cautiously weighted to the topside with the daily chart offering a clearly defined ascending channel formation dating back to the January 13th low. We favor buying into sterling weakness noting that a break below the 23.6% Fibonacci extension taken from January 13th and March 12th troughs at 1.5775 negates our interim bias. The Japanese yen was the weakest performer of the lot with an advance of just 0.02%. The yen quickly pared early losses that saw the pair dip as low as 81.19 before rebounding to close just below interim resistance at 81.60. For complete USDJPY scalp targets refer to today’s Winners/Losers report.

Tomorrow’s economic docket is rather light with only business/economic surveys and the February wholesale inventory report on tap. However with European markets coming back online tomorrow for the first time since NFPs printed last Friday, investors will be closely eyeing equity performances with concerns over China now coming more into focus. Chinese CPI data last night topped expectations with the year on year print coming in at 3.6%, missing calls for a read of just 3.4% y/y. The data comes off a previous print of 3.2% y/y a month earlier and suggests that price growth in China may be gathering pace, limiting the PBoC’s scope to further ease policy. As concerns about a possible “hard landing” in China take root, look for risk to remain on the defensive with traders eagerly anticipating GDP data out of China this Friday. The dollar’s future hangs in the balance with the index likely to trade within a tight range ahead of key trade balance and inflation data later this week.