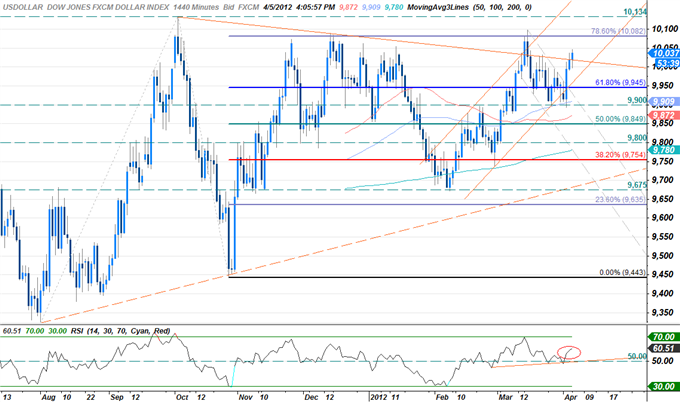 The greenback is modestly firmer at the close of North American trade with the Dow Jones FXCM Dollar Index (Ticker: USDOLLAR) advancing 0.16% on the session. The gains come on the back of a lackluster performance in US equities with the major stock indices closing mixed on the session after dipping in and out of positive territory. The Dow and the S&P were weaker on the session with marginal declines of 0.11% and 0.06% respectively with the NASDAQ ending higher by 0.40%. Concerns about Europe’s deepening debt crisis have crept back into focus with yields on Spanish debt toping 5.7%, its highest level since the ECB conducted its first round of LTROs back in December. With central banks around the word leaving the door open for further easing, investors will be closely eyeing tomorrow’s much anticipated non-farm payroll print in light of the recent shift in the Fed’s policy outlook.

The dollar managed to close above channel resistance dating back to the October highs with index continuing to trade within the confines of an ascending channel formation. Key daily resistance remains with the 78.6% Fibonacci extension taken from the August 1st and October 27th troughs at 10,080 with a breach here eyeing the October highs at 10,134. Critical daily support rests with channel support and the 61.8% extension at 9945. Note that the possibility of a pullback of magnitude prevails after posting three consecutive days of advances with only a break below RSI trendline support negating our interim bias. 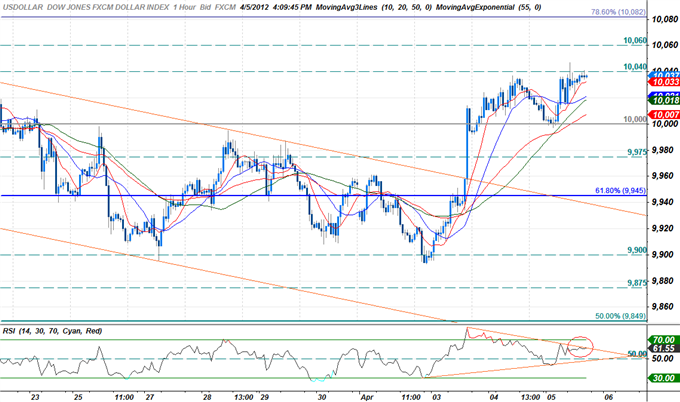 An hourly chart shows the index holding below interim resistance at 10,040 with subsequent ceilings seen higher at 10,060 and the 78.6% extension at 10,080. Interim support rests at the psychological 10,000-mark with a break below this level eyeing support targets at 9975 and the 61.8% extension at 9945. Look for the pair to remain in consolidation as trade thins ahead of tomorrow’s key employment data with and RSI break out of the wedge formation likely to offer an intra-day directional bias on the index.

The greenback advanced against two of the four component currencies highlighted by a 0.59% advance against the euro after moving a full 113% of its daily ATR. For complete EUR/USD daily and scalp targets ahead of tomorrow’s NFP print, refer to this week’s Scalp Report. The Australian dollar is top performer of the lot with the high yielder paring some of the steep losses sustained earlier in the week for an advance of 0.30% on the session. Key daily support for the aussie stands at the 61.8% Fibonacci retracement taken from the December 15th advance at 1.0240 with rally’s off this level offering favorable positioning for short entries.

The March non-farm payroll report tomorrow will be central focus with consensus estimates calling for the addition of 205K jobs as the employment rate holds at 8.3%. For a detailed outlook and trade setups for tomorrow’s employment data, refer to the Trade the News Report. While the data is likely provide guidance on the health of the labor market, investors will be weighing the results against future Fed policy with a weaker read likely to put pressure on the greenback as calls for further easing from the central bank resurface. With US equity markets closed for the Good Friday holiday, look for thin trade conditions to possibly fuel substantial volatility in the dollar with tomorrow’s print having larger implications for further Fed policy.