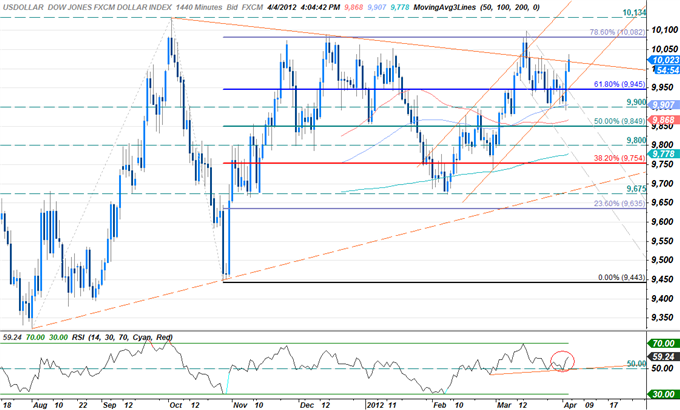 The greenback is markedly stronger at the close of North American trade with the Dow Jones FXCM Dollar Index (Ticker: USDOLLAR) advancing 0.29% on the session. The gains come on the back of a substantial sell-off in risk with global equity markets closing in the red today. Global growth concerns have kept pressure on broader market sentiment with weaker than expected trade balance figures out of Australia last night sparking a sell-off that carried over into European trade. Remarks made by ECB president Mario Draghi this morning further fueled fears of a pro-longed recession with European stocks down 2.3-3% across the board. The dollar surged as traders jettisoned higher yielding assets in favor of the relative ‘safety’ of the greenback. US equities closed off their lows with the Dow, the S&P, and NASDAQ off by 0.95%, 1.02%, and 1.46% respectively. 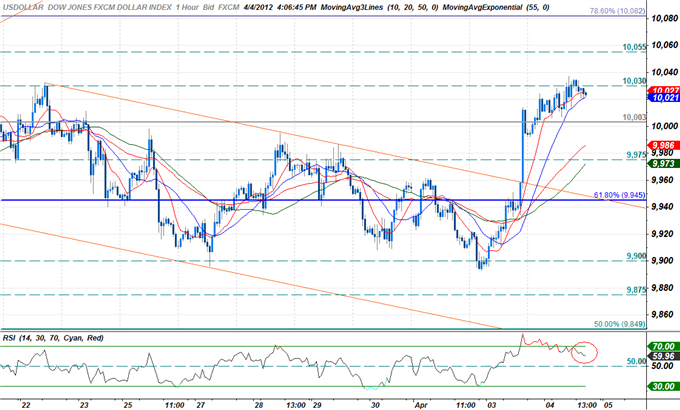 An hourly chart shows the index breaking above short-term channel resistance late in US trade yesterday before consolidating just below soft resistance at 10,030. A break here eyes subsequent intra-day targets at 10,055 and the 78.6% extension at 10,080. Interim support rests with the psychological 10,000 mark backed by 9975, and the 61.8% extension at 9945. Bearish RSI divergence warns of a possible pullback before resuming higher with a drawdown in the index offering favorable long entries.

The greenback advanced against three of the four component currencies highlighted by a 0.74% advance against the Australian dollar. The aussie has remained under substantial pressure as softer-than-expected economic data and a broader shift away from risk assets weighed on the high yielder. Topping the volatility chart is the euro with a move worth nearly 119% of its daily average true range. The single currency ended the session off by 0.71% as the ECB struck a cautious tone citing that significant “downside risks” to the region’s growth outlook remain in focus. The Japanese yen was the top performer of the lot with an advance of 0.46% as demand for lower yielding ‘haven’ assets kept the yen well supported. For complete scalp targets on the EURUSD and the USDJPY refer to today’s Winners/Losers report.

Tomorrow’s economic docket is rather light with only weekly initial and continuing jobless claims on tap. Consensus estimates call for initial claims to ease to 355K from 359K with continuing claims seen climbing to 3350K from 3340K. Traders will be eyeing the data ahead the widely anticipated non-farm payrolls report on Friday when estimates call for the addition of 205K jobs for the month of March. While the data is likely to prompt volatility in dollar based pairs, the print has larger implications on the direction of monetary policy as calls of further easing from the Fed have continued to subside. Look for the dollar to consolidate heading into Asia Pacific trade with traders likely to take to the sidelines ahead of Friday’s crucial employment report.