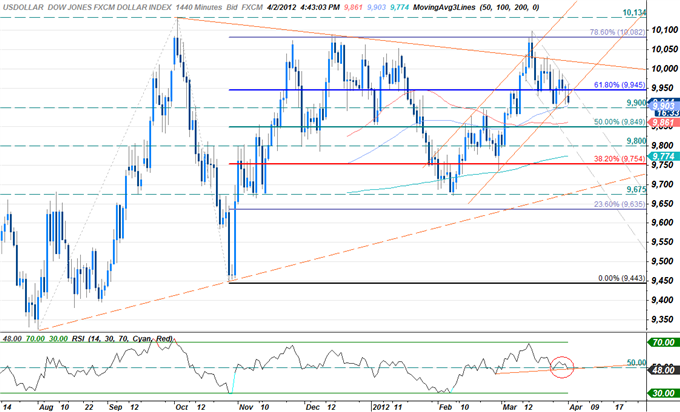 The greenback is markedly weaker at the close of North American trade with the Dow Jones FXCM Dollar Index (Ticker: USDOLLAR) off by a 0.41% on the session. The losses come on the back of a reversal in broader risk sentiment that saw equities pare early losses carried over by weakness in European markets. Stronger-than-expected ISM manufacturing data helped prompt a rally that saw all three major stock indices close in the black with the Dow, the S&P, and NASDAQ advancing 0.40%, 0.74%, and 0.91% respectively. Interestingly US Treasury yields moved lower on the session with the 10-year off by nearly 3 basis points despite the broader rally in risk assets.

The dollar broke below the convergence of the 61.8% Fibonacci extension taken from the August 1st and October 27th troughs at 9945 and channel support dating back to the February 29th low before finding solace just ahead of the 100-day moving average just ahead of the 9900 mark. We reserve this level as our bottom limit with a break below eyeing daily support targets at the 50% extension at 9850. Daily resistance holds with the 61.8% extension at 9945 with a topside breach eyeing trendline resistance dating back to the October 4th high, currently just above the 10,000-level. Note that daily RSI now looks poised for a break below trendline support dating back to mid-February with such a scenario offering further conviction on our directional bias. 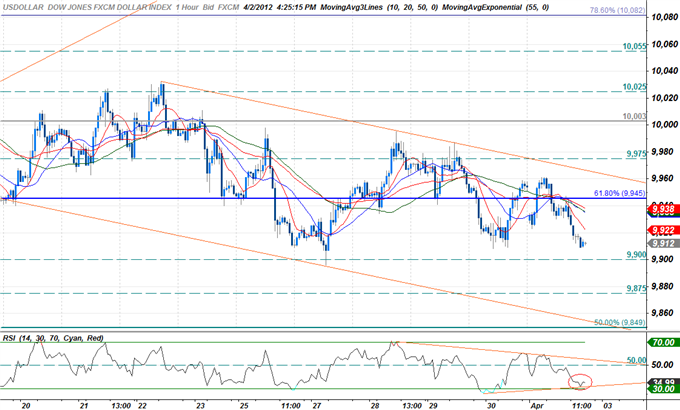 An hourly chart shows the index continuing to hold within the confines of a descending channel formation with the dollar struggling to hold above the 61.8% extension. As noted earlier, interim support rests at the 9900 with subsequent intra-day support targets at 9875 and the 50% extension at 9850. A topside breach of the channel exposes targets at 9975, 10,000, and 10,025. As RSI continues to consolidate, look for a break in the oscillator to offer further clarity with traders eagerly anticipating tomorrow’s release of the FOMC minutes.

The greenback declined against three of the four component currencies highlighted by a 1.00% decline against the Japanese yen. The USDJPY has remained on the defensive with the yen advancing against all its major counterparts in US trade. The euro was the worst performer of the lot with the single currency posting a decline of 0.135 on the session. On a daily basis, 1.3380 remains the key topside resistance the euro will need to overcome for the pair to remain within the ascending channel formation which has held the single currency since the March 15th low. Key support remains at 1.3280. For complete scalp targets on the EURUSD and USDJPY refer to today’s Winners/Losers report.

Tomorrow’s economic docket is highlighted by the February Factory orders and minutes from the March 13th FOMC policy decision. Factory order are expected to have improved in February with consensus estimates calling for a print of 1.5% m/m, up from a previous contraction of 1.0% m/m. All eyes will be fixated on the minutes form the latest FOMC rate decision with investors looking for comments with regards to further easing from the Fed. Over the past few weeks remarks made by various central bankers (voting and non-voting) regarding to the Fed’s pledge to anchor rates through late 2014 have shown an increasing rift growing within the central bank. Should the minutes strike a more hawkish tone, look for the dollar to remain well supported as investors weigh the prospects for future monetary policy ahead of key employment data this Friday.