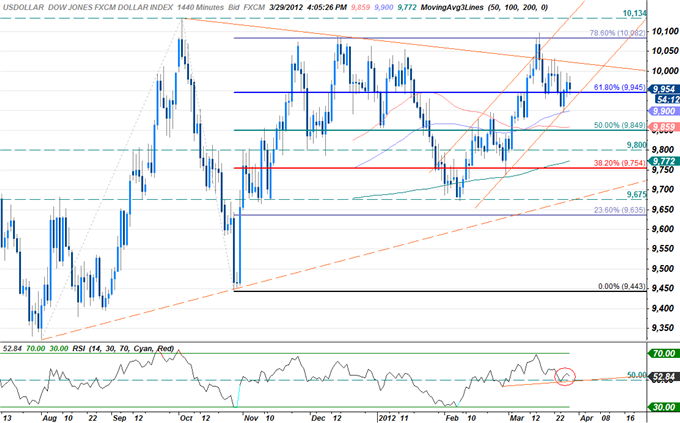 The greenback is modestly weaker at the close of North American trade with the Dow Jones FXCM Dollar Index (Ticker: USDOLLAR) off by a mere 0.15% on the session. The loss comes amid a mixed performance in equity markets with the major indices struggling to pare early losses throughout the session. Remarks made by Philadelphia Fed President Charles Plosser helped risk assets climb back after the central banker noted optimism regarding the US recovery, specifically as it pertains to the manufacturing and employment sector. Plosser went on to cite concerns about ‘drifting up’ inflation while stating his discontent for the 2014 pledge the Fed has put forward. The comments draw a contrast to remarks made by Fed Chairman Ben Bernanke who earlier in the week vowed to keep all options open as growth in the employment sector continues to lag. Nonetheless, ongoing concerns about a slowdown in Asia and weaker forecasts for European growth have continued to weigh on broader market sentiment with risk assets remaining on the defensive. The Dow managed to close in the black with a fractional advance of just 0.15% while the S&P and NASDAQ were lower by 0.16% and 0.31% respectively.

The dollar has remained in consolidation over the past two sessions with the index continuing to trade within the confines of an ascending channel formation. Daily support rests with the 61.8% Fibonacci extension taken from the August 1st and October 27th troughs at 9945 and is backed closely by channel support. Topside resistance stands with trendline resistance dating back to the October 4th high with the 78.6% extension at 10,080 continuing to limit dollar advances since early December. Note that a break below daily RSI trendline support dating back to February 28th risks substantial losses for the greenback with such a scenario likely with a pickup in risk appetite. 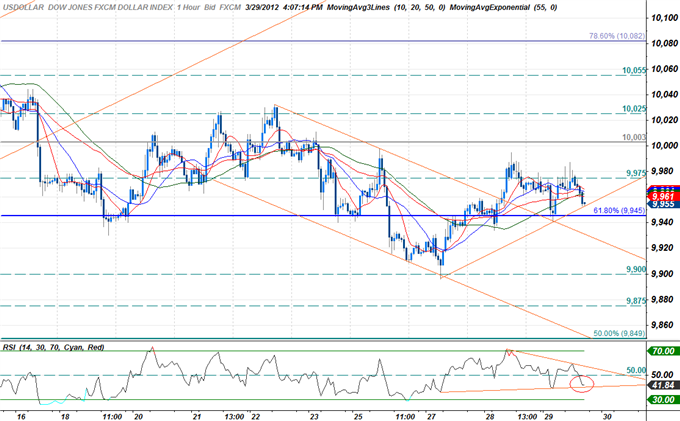 An hourly chart shows the index breaching above channel resistance dating back to the March 22nd high before rebounding off former channel resistance in early US trade. Interim support now rests with the 61.8% extension at 9945 with a break below eyeing intra-day targets at 9900, 9875, and the 50% extension at 9850. Soft resistance stands at 9975 backed by the psychological 10,000 mark and 10,025. Look for the index to remain in consolidation heading into Asia Pacific trade with a break below short-term trendline support eyeing subsequent downside targets.

The greenback advanced against two of the four component currencies highlighted by a 0.17% advance against the euro. Although the single currency has come under pressure this week, the euro continues to hold above key support at the 23.6% Fibonacci retracement taken from the January 16th advance at 1.3820. A close below this level risks substantial losses for the euro with subsequent daily support seen at the 50-day moving average at the 1.32-figure. The Japanese yen is the top performer of the lot with an advance of 0.54% against the greenback as classic haven flows continued to prop-up demand for the low yielder. While the USDJPY correction has been larger than anticipated, we continue to eye key support at the 82-figure with dips in the exchange rate near to this level offering favorable entries for long scalps.

Tomorrow’s economic docket is highlighted by February personal income/spending, core personal consumption expenditure, and the final print on the University of Michigan confidence survey. Both spending and income are expected to have improved last month with consensus estimates calling for a print of 0.4% and 0.6% respectively while core PCE is expected to hold at 1.9% y/y. The Michigan confidence survey rounds out the week with expectations for the final print to improve to 74.8 from a previous read of 74.3. Should the data continue to top expectations, look for the dollar to remain well supported as calls for further easing from the Fed subside. Still, traders will be awaiting key employment data on tap next Friday with the consensus estimates calling for non-farm payrolls to rise by 210K for the month of March.