Is the US Dollar Rebound Sustainable? Traders Eye the Economic Docket 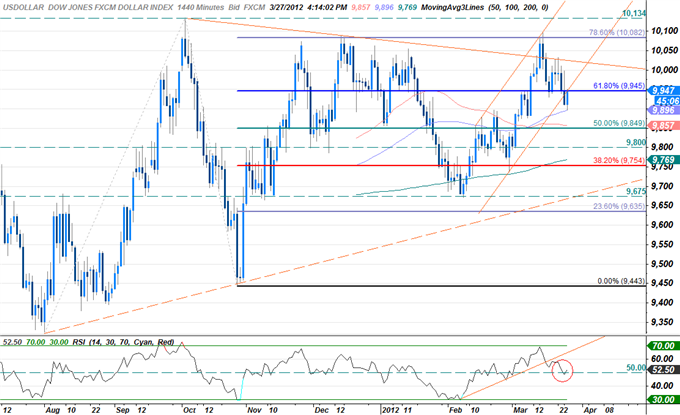 The greenback is notably stronger at the close of North American trade with the Dow Jones FXCM Dollar Index (Ticker: USDOLLAR) advancing 0.34% on the session. The advance comes on the heels of yesterday’s decline which was prompted by dovish remarks from central bank Chairman Ben Bernanke who held his ground with regards to further easing from the Fed amid ongoing weakness in the labor markets. As such, it seems the Fed will maintain its zero-interest rate policy (ZIRP) throughout 2012 despite more robust economic data coming out of the world’s largest economy. What does this mean for the dollar? While the remarks suggest no major change in policy, it’s likely to limit dollar advances in the interim as traders continue to factor in super low rates with improving US data likely to see investors shift their focus as the appeal for higher yielding assets grows. Equities were weaker on the session with the Dow, the S&P, and NASDAQ off by 0.33%, 0.28%, and 0.07% respectively as investors piled into the dollar and US Treasuries.

The dollar rebounded off the 100-day moving average at 9896 before encountering resistance at the confluence of former channel support and the 61.8% Fibonacci extension taken from the August 1st and October 27th troughs at 9945. This level remains paramount for the greenback with a breach above offering conviction on our bullish bias with daily targets eyed at long standing trendline resistance dating back to the October 4th highs, currently around 10,020. Note that the daily relative strength index now looks poised for a rebound off the 50-level with such a scenario likely to fuel the index with enough momentum to breach the 9945 barrier. A break below the 100-day moving average eyes daily targets at the 50% extension at 9850. 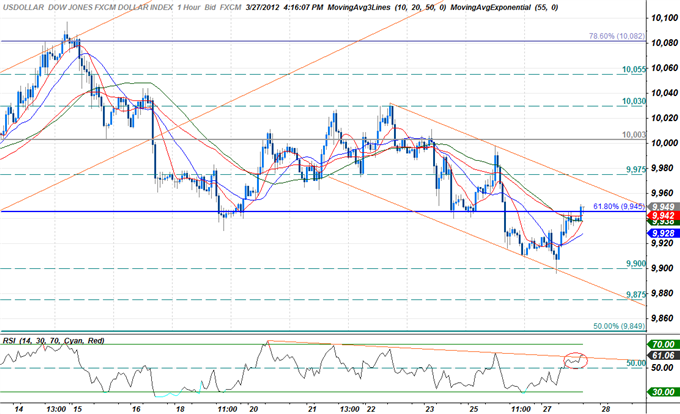 An hourly chart shows the index continuing to trade within the confines of a descending channel formation with the dollar now looking to test channel resistance with an attempted break above the 61.8% extension at 9945. Subsequent intra-day topside targets are eyed at 9975, 10,000, and 10,030. Critical resistance comes into play at the 78.6% extension at 10,080. Support rests at 9900 backed by 9875 and the 50% extension at 9850. Look for the index to remain in consolidation heading into Asia Pacific trade with a breach above channel resistance offering further conviction for dollar advances.

The greenback advanced against all four component currencies highlighted by a 0.63% advance against the Australian dollar. The high yielder tested channel resistance today dating back to the February 29th high before reversing sharply to close below the 1.05-figure. The aussie is likely to remain under pressure with our medium-term bias remaining weighted to the downside. For complete AUDUSD scalp targets refer to last week’s Scalp Report. The sterling was the top performer of the lot with a loss of just 0.08% despite broad-based dollar gains. Key resistance for the pound continues to hold at the 1.60-figure, with a likely break above this level eyeing daily topside targets above the 1.61-handle. For complete GBPUSD scalp targets refer to today’s Winners/Losers report.

Tomorrow’s economic docket is highlighted by the February durable goods orders with consensus estimates calling for orders to rise by 2.9% m/m, up from a previous decline of 4.0% m/m. It will be interesting to see the dollar’s reaction on tomorrow’s print with a stronger than expected read likely to support risk, but will it support the dollar in light of Bernanke’s dovish rhetoric? Look to take cues off price action on the heels of the print with a break above channel resistance in the index targeting subsequent topside levels.