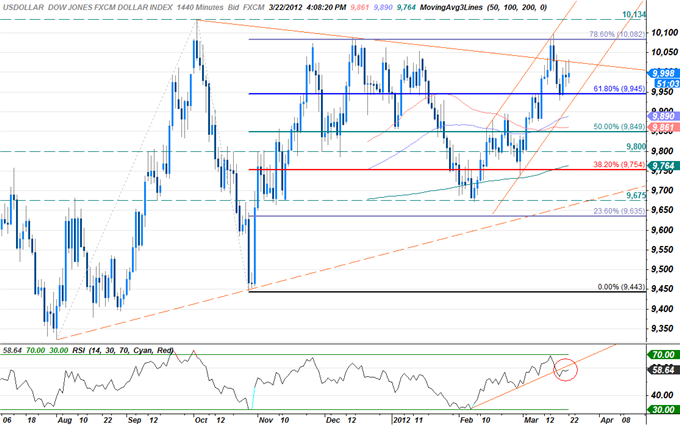 The greenback is fractionally higher at the close of North American trade with the Dow Jones FXCM Dollar Index (Ticker: USDOLLAR) advancing just 0.02% on the session. The day was marked by broad-based losses in equities after weaker than expected Chinese manufacturing data showed contraction in the sector, fueling ongoing concerns about a slower growth in the world’s second largest economy. Eurozone PMI data followed with the composite, services, and manufacturing components all missing estimates, posting deeper contractions than expected. US Stocks closed weaker across the board for a third consecutive session with the Dow, the S&P, and NASDAQ off by 0.60%, 0.72%, and .39% respectively. While the dollar was relatively unchanged on the session,

The dollar held a rather tight range throughout the session after failing a second attempt at a breach above trendline resistance dating back to the October 4th highs. The move suggests that the greenback may look to pull back to the convergence of channel support and he 61.8% Fibonacci extension taken from the August 1st and October 27th troughs at 9945. This level remains paramount with only a break below negating our bullish bias. Note that the daily relative strength index seems to be flattening out, offering little in the way of conviction for our directional bias. 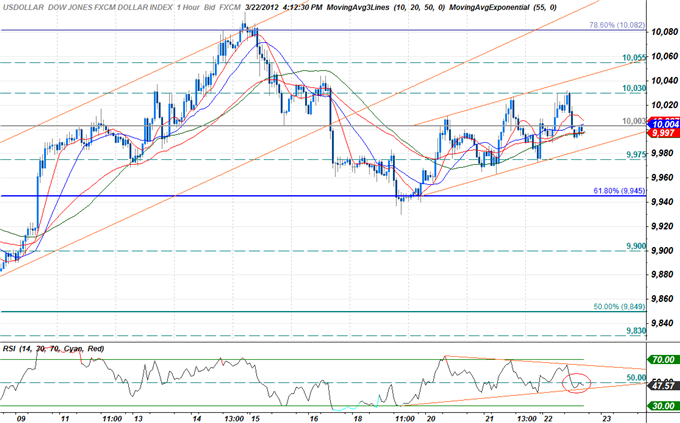 An hourly chart shows the index continuing to trade within the confines of a newly formed ascending channel formation with the dollar closing just above the psychological 10,000 mark. A break below this formation eyes subsequent support targets at 9975, the 61.8% extension at 9945 and 9900. Topside resistance stands at 10,030 backed by 10055, and the 78.6% extension tested last week at 10,080. Look for the index to remain in consolidation heading into Asia Pacific trade with a breach above channel resistance offering further conviction for dollar advances.

The greenback advanced against three of the four component currencies highlighted by a 0.71% advance against the aussie. The high yielder has come under substantial pressure as fears of a slowdown in Australia’s largest trading partner, China continue to weigh on demand for the aussie. For complete analysis on the AUDUSD and detailed scalp targets refer to this week’s Scalp Report. The Japanese yen is the top performer against the dollar today with an advance of 1.08% on the session after moving a full 140% of its daily average true range. Classic haven flows have continued to back both the dollar and the yen as traders jettison risk assets in favor of lower yielding “haven” assets. Although our medium-term bias on the USDJPY remains weighted to the topside, the recent pullback may still have yet to go with move likely to offer favorable long entries. For complete scalp targets on the USDJPY refer to today’s Winners/Losers report.

Tomorrow’s economic docket is rather light with only the February new home sales on tap. Consensus estimates call for the pace of sales to increase by 1.3% m/m, up from a previous drawdown of 0.9% m/m. Investors will be closely eyeing the data after existing home sales saw a decline of -0.9% m/m yesterday, missing calls for a positive read of 0.9% m/m. With the housing sector still under pressure, the Fed will remain reluctant to normalize policy and the dollar may come under pressure should the print miss expectations.