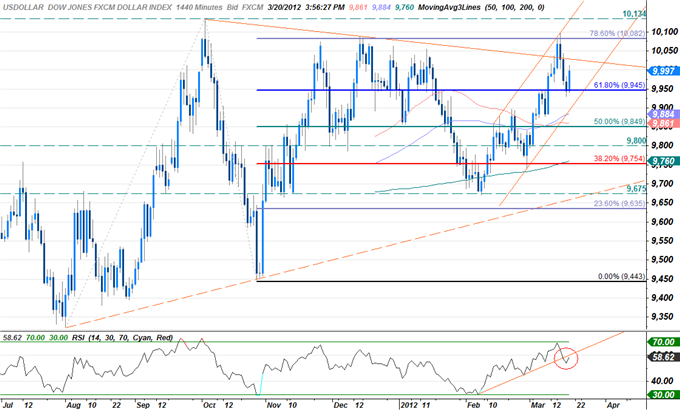 The greenback rebounded off key Fibonacci support today with the Dow Jones FXCM Dollar Index (Ticker: USDOLLAR) advancing 0.54% at the close of North American trade. The advance snaps a three day losing streak that saw the dollar come off sharply by more than 1.24% after testing long standing resistance at 10,080. The advance comes amid a broad-based risk sell-off in equities as concerns over slower growth in China prompted a bout of profit taking that weighed heavily on broader market sentiment. Stocks closed lower across the board with the Dow, the S&P, and NASDAQ off by 0.52%, 0.30%, and 0.14% respectively.

The 61.8% Fibonacci extension taken from the August 1st and October 27th troughs at 9945 provided ample support for the index which rebounded sharply in pre-market trade. This level remains paramount for the greenback with a break below eyeing the confluence of channel support and the 100-day moving average at 9880. Note that yesterday’s RSI break below trendline support now looks to re-test that same trendline which now will stand as resistance. A breach above this level bodes well for the dollar with such a scenario eyeing trendline resistance dating back to the October 4th highs and the key 78.6% extension at 10,080. 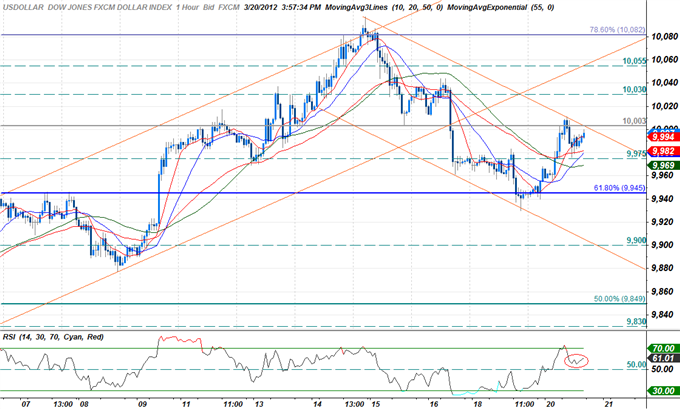 An hourly chart shows the index continuing to trade within the confines of a descending channel formation dating back to the March 14th highs with the index closing just below channel resistance at the psychological 10,000 mark. A breach here eyes topside targets at 10,030, 10,055 and the 78.6% extension at 10,080. Interim support rests at 9975 backed by the key 61.8% extension at 9945 and 9900. Look for the dollar to consolidate as we head into Asia Pacific trade with a topside break of the channel eyeing subsequent resistance targets.

The greenback advanced against all four component currencies today highlighted by a 1.21% advance against the Australian dollar. The aussie has come under substantial pressure as a broad-based global risk sell-off saw traders jettison higher yielding assets with aussie losses out pacing all its major counterparts on the session. The AUDUSD closed the session just above key support at 1.0475 with a break here likely to expose targets at the 200-day moving average just above the 1.04-figure. The euro was the strongest performer of the lot with a loss of just 0.14% on the session after the euro mounted an impressive counteroffensive in at the open of US trade that saw the EURUSD pare nearly all of the overnight losses.

Tomorrow’s economic docket is rather light with only the February existing home sales report on tap. Consensus estimates call for a print of 0.7% m/m, down from a previous read of 4.3% m/m with the data likely to reinforce continued weakness in the housing sector after today’s disappointing read on housing starts which decreased by 1.1% m/m in February. Look for the dollar to remain well supported so long as broader market sentiment remains on the defensive with the a close back above 10,000 suggesting the index may have put in an interim base.