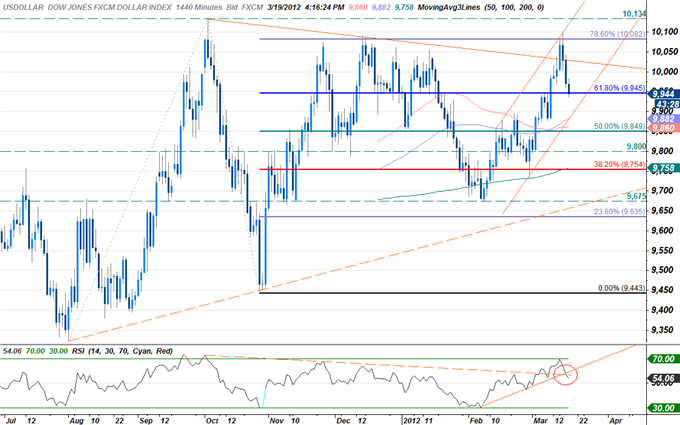 The greenback remained on the defensive early in the week with the Dow Jones FXCM Dollar Index (Ticker: USDOLLAR) off by more than 0.31% at the close of North American trade. Today marks the third consecutive day of losses for the dollar after rebounding off critical resistance at 10,080 last week and pressure on the greenback could persist as equity market melt higher. Stocks closed out a lackluster session with the Dow, the S&P, and NASDAQ posting gains of 0.05%, 0.40%, and 0.75% respectively. Although a pullback of some magnitude in the index is likely after such a substantial drawdown, we continue to favor selling into dollar strength in the interim with a break below key support likely to keep downward pressure on the greenback.

The dollar closed the session just below the 61.8% Fibonacci extension taken from the August 1st and October 27th troughs at 9945 with a break below RSI trendline support suggesting the index may continue to trek lower in the interim. Daily support is now eyed at the confluence of the 100-day moving average and channel support at 9880. Topside resistance stands with trendline resistance dating back to the October 4th high backed by the 78.6 extension at 10,080. 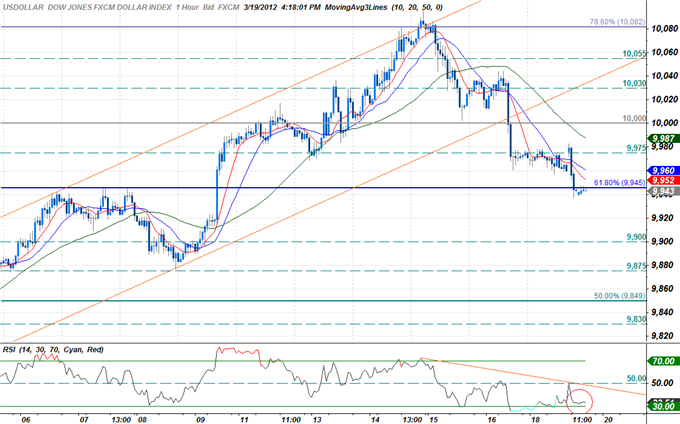 An hourly chart shows the index continuing its descent after breaking below channel support dating back to the February 29th lows before finding solace around the 61.8% extension at 9945. A clear break below this level eyes interim support at 9900 backed by 9875 and the 50% extension at 9850. Interim topside resistance stands at 9975 backed by the psychological 10,000 level, 10,030, and former channel support at 10,055. Note that a break above RSI resistance would alleviate some of the downside pressure on the greenback with such a scenario eying intra-day topside targets.

The greenback fell against all four component currencies for a third consecutive day highlighted by a 0.51% decline against the euro. The single currency has remained well supported as fears of an imminent default and further debt contagion temporarily subside with the EURUSD eyeing a test of key daily resistance at 1.3280. The yen was the weakest performer of the lot with a gain of just 0.13% despite broad based dollar losses. Our medium-to-long term outlook on the yen remains bearish (bullish USDJPY) with pullbacks in the exchange rate offering favorable long entries eying topside targets around the December 2010 highs at 84.50.

February housing data tops tomorrow’s US economic docket with housing starts and building permits on tap. Consensus estimates call for housing starts to increase by just 0.1% m/m, down from a previous print of 1.5% m/m, with the pace of growth in permits also seen softening to 0.4% m/m from 0.07% m/m. The data is likely to fuel concerns that the sector may have yet to bottom as data continues to lag relative strength in the broader market. As such, a disappointing print could be the catalyst needed to reverse the dollar’s recent drawdown with a broad-based movement into risk aversion likely to limit further dollar losses in the interim.