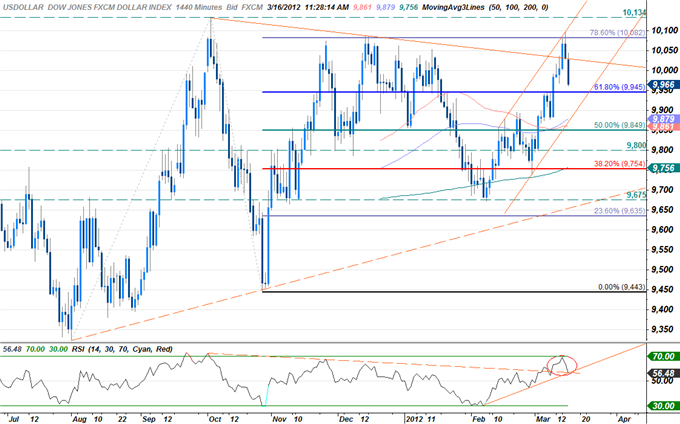 The greenback posted its largest single day decline this month with the Dow Jones FXCM Dollar Index (Ticker: USDOLLAR) off by more than 0.58% at noon in New York. The decline pared the entire week’s advance with the index now back below former long-standing trendline resistance dating back to the October highs. Although CPI data came in at expectations, a weaker than expected University of Michigan confidence survey accelerated the dollar’s decline with interim support seen at the 61.8% Fibonacci extension taken from the August 1st and October 27th troughs at 9945. The index has now completed a 5-wave rally with the correction likely to find support at this level before heading lower. Only a break of the ascending channel formation would shift our bias more aggressively bearish. Note that a break below RSI trendline support risks further losses for the greenback with such a scenario likely to challenge channel support. Daily topside resistance stands with the 78.6% extension at 10,080 backed by 10,134. 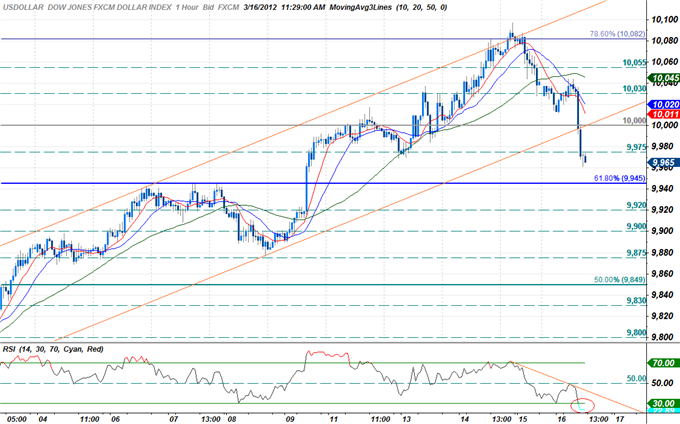 An hourly chart shows the index breaking below channel support dating back to the February 29th lows before losing steam just ahead of the 61.8% extension at 9945. A break here eyes subsequent floors at 9920, 9900 and 9875. Topside resistance now stands with former channel support backed by 10,030 and 10,055. Note that RSI now rest deep in oversold territory with a pullback offering favorable shorts as the dollar continues its descent.

The greenback fell against all four component currencies for a second consecutive day highlighted by a 0.85% decline against the British pound. For complete scalp targets on GBPUSD, refer to today’s Winners/Losers report. The yen was the weakest performer of the lot with an advance of just 0.27% despite broad dollar losses. Our longer-term outlook on the USDJPY remains weighted to the topside however with pullbacks in the exchange rate offering favorable long entries. Look for the dollar to consolidate into the close with further weakness expected next week before the dollar can find a base off which to mount its counteroffensive.