USD Rebounds Off Key Resistance- Is this the End of the Dollar Rally? 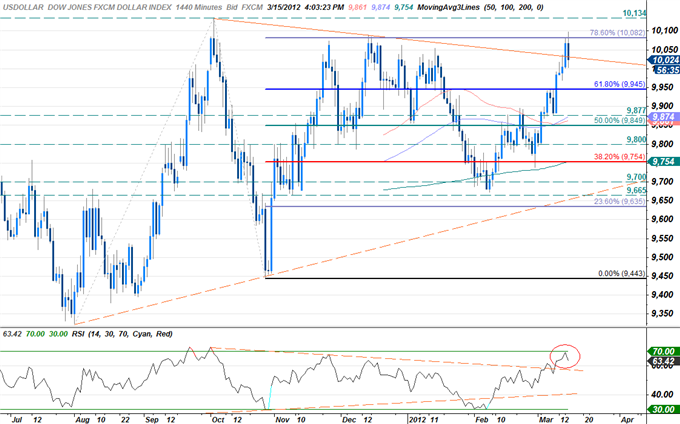 The greenback is markedly weaker at the close of North American trade with the Dow Jones FXCM Dollar Index (Ticker: USDOLLAR) off by 0.45% on the session after moving a full 147% of its daily average true range. The losses come on the back of a four day winning streak that saw the index advance more than 1.8% as positive US data and an upbeat FOMC policy statement fueled massive flows into the reserve currency. Stronger than expected weekly jobless claims, empire manufacturing and the Philadelphia Fed index today fueled a rally in risk assets with US Treasuries continuing to come off as investors flocked into higher yielding assets. Equity market closed at session highs with the Dow, the S&P, and NASDAQ advancing 0.44%, 0.60% and 0.51% respectively.

The dollar pulled away from critical Fibonacci resistance at the 78.6% extension taken from theAugust 1st and October 27th troughs at 10,080 before sharply reversing in early US trade. The index closed just below former trendline resistance dating back to the October 4th highs with daily RSI rebounding just ahead of the 70-overbought mark. Daily support now stands at the 61.8% extension at 9945 with a break above key resistance eyeing the October highs at 10,134. 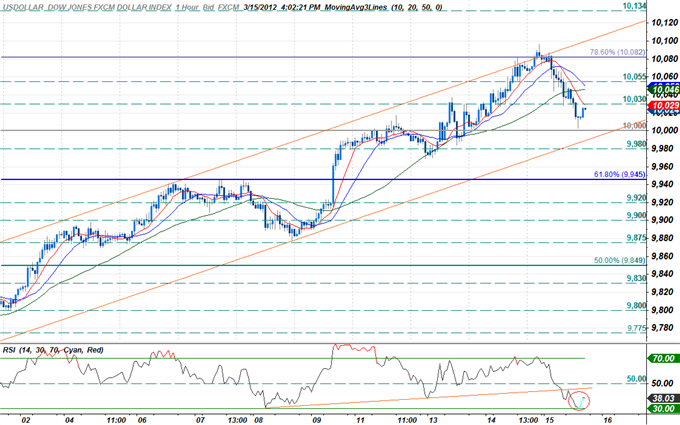 Despite today’s losses, an hourly chart shows the index continuing to trade within the confines of an ascending channel formation with the greenback finding solace just ahead of the psychological 10,000 barrier. A break below this level eyes subsequent floors at channel support backed by 9980 and the 61.8% extension at 9945. Soft interim resistance stands at 10,030 with subsequent topside targets eyed at 10,055 and 78.6% extension at 10,080. Note that a rebound off former RSI support (now resistance) coupled with a break below channel support in price action would negate our topside bias with such a scenario eyeing subsequent downside targets.

The greenback fell against all four component currencies highlighted by a 0.75% decline against the Australian dollar. Improving broader market sentiment and a pullback in the dollar have helped support the aussie advance with the AUDUSD closing just below daily resistance at 1.0550. The pound is the weakest performer on the lot with a modest advance of just 0.26% on the session. The sterling has continued to decouple from broader risk trends with the pair moving just 89% of its daily average true range, a stark contrast from its counterparts represented in the index. Key support for the GBPUSD remains at the 1.56-figure with a breach above 1.5750 eyeing targets at the 1.58-handle and the weekly high at 1.5830.

Tomorrow’s economic docket is highlighted by the February consumer price index, industrial production, and the March University of Michigan confidence survey. The pace of inflation is expected to hold at an annualized rate of 2.9% with industrial production seen climbing by 0.4%, up from a previous flat print. The week wraps up with the Michigan confidence survey with consensus estimates calling for a print of 75.6, up from a previous read of 75.3. The data would mark the highest print on confidence since February of 2011 and would further support calls for the Fed to set the stage to begin normalizing monetary policy. As such, the dollar may find some support after today’s substantial pullback.