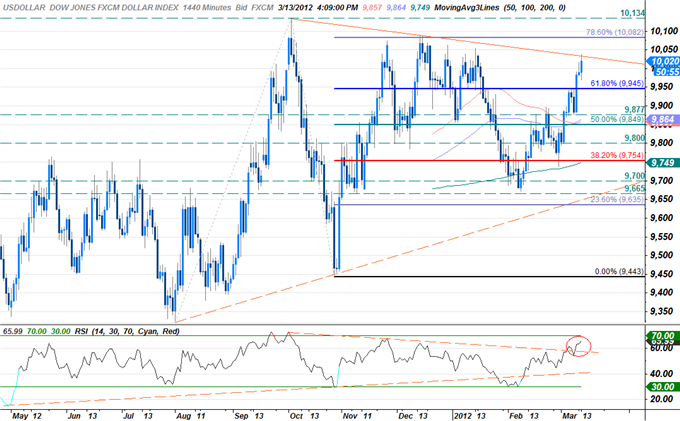 The greenback is markedly higher at the close of North American trade with the Dow Jones FXCM Dollar Index (Ticker: USDOLLAR) advancing 0.23% on the session after moving a full 116% of its daily average true range. Today’s FOMC policy statement offered further support for the dollar’s advance after the Fed acknowledged continued improvement in US economic data while citing that recent financial market strains have eased. The remarks leave little room for further dollar diluting quantitative easing measures and as such the pressure on the greenback should remain limited as speculation for QE3 subside. Equity markets were substantially higher at the close with the Dow, the S&P, and NASDAQ surging 1.68%, 1.81%, and 1.88% respectively as US Treasuries sold off, pushing up yields across the curve.

The dollar saw a test of key trendline resistance dating back to the October 4th high at 10,035 early in the session. This level remains paramount for the greenback with a breach here eyeing the 78.6% Fibonacci extension taken from the August 1th and October 27th troughs at 10,080 and the October high at 10,134. Daily support now rests with the 61.8% extension at 9945. Not that the daily relative strength index continues to hold above former RSI resistance with the slope suggesting the dollar could continue to gain traction over the coming days. 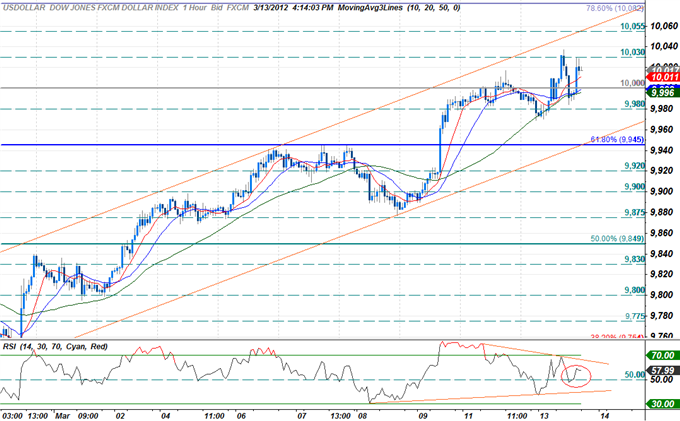 An hourly chart shows the index breaking above the psychological 10,000 mark before encountering soft resistance at the 10,030 level. A breach here eyes interim topside targets at 10,055 and the 78.6% extension at 10,080. Interim support rests at 9980 backed by the 61.8% extension at 9945, 9920, and the 9900-mark. Our medium-to-long term outlook for the dollar remains weighted to the topside noting the possibility for a correction of some magnitude after testing key trendline resistance in intra-day trade.

The greenback advanced against two of the four component currencies highlighted by a 0.93% advance against the Japanese yen. The USD/JPY has continued to strengthen with today’s FOMC rate decision fueling the pair with enough momentum to break above key Fibonacci resistance at 82.80. For complete scalp targets on the yen refer to this morning’s Winners/Losers report. The pound was the strongest performer of the lot with an advance of 0.31% as stronger-than-expected trade balance data showed the national deficit contracting January. We remain neutral on the sterling at these levels noting key daily support at the 1.56-figure.

Tomorrow’s economic docket offers little in the way of tradable event risk with Fed Chairman Ben Bernanke’s speech before community bankers in Nashville Tennessee topping the calendar. Traders will be lending a keen ear to the Bernanke’s remarks in the wake of today’s FOMC statement which offered little for traders to sink their teeth into. Again we note the shifting dynamic of the greenback beginning to react favorably to positive data flow out of the US with the last couple of sessions giving us further conviction for this shift to gather pace later on this year. The dollar is likely to remain well supported for now with a pullback in the index offering favorable long entries as we look for a break above the key trendline resistance noted earlier.