NFPs In Focus- Volatility to Breed Clarity for US Dollar 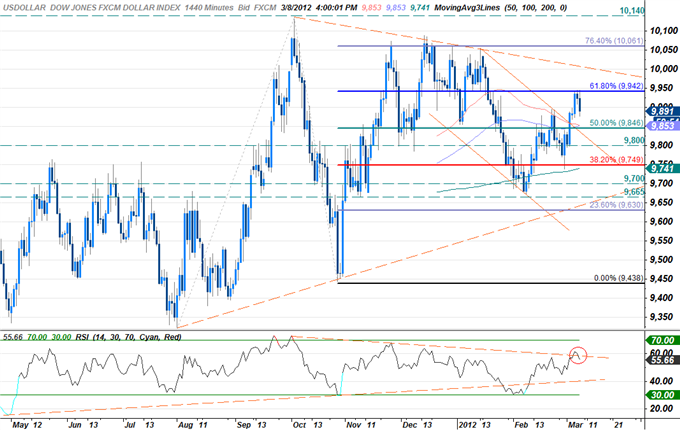 The greenback is softer at the close of North American trade with the Dow Jones FXCM Dollar Index (Ticker: USDOLLAR) off by 0.38% on the session after moving a full 116% of its daily average true range. The losses come on the back of a strong performance in equity markets with the Dow, the S&P, and the NASDAQ advancing 0.55%, 0.98%, and 1.18% respectively. Optimism regarding Greek PSI talks has continued to support broader market sentiment with the higher yielding assets outperforming at the expense of the reserve currency. However with details of the PSI agreement due out just minutes ahead of NFPs, the relief rally could be short lived as the developments coming out of the world’s largest economy continues to dampen the scope for QE3. Accordingly the dollar may look to reverse the recent losses as markets begin to factor out further dollar diluting measures from the Fed.

The dollar continued to pull away from the 61.8% Fibonacci extension taken from the August 1st and October 27thtroughs at 9845 as investors jettisoned the greenback in favor of yields. This level remains paramount for the dollar with a breach eyeing long-standing trendline resistance dating back to the October 4th highs, currently just above the psychological 10,000 barrier. Note that the daily relative strength index has now close back below RSI resistance dating back to October 3rd and suggests that the dollar may continue to pare a portion of the March advance. However with key employment figures and headline risk out of Europe looming, a surge in volatility could easily reverse today’s losses as market participants react to the data. Daily support rests at the confluence of the 50 & 100-day moving averages at 9853 backed closely by the 50% extension at 9850. 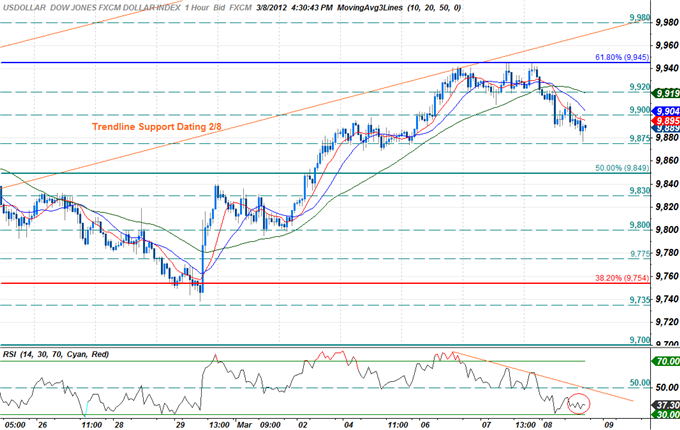 An hourly chart attests to the dollar’s weakness with the index closing just above soft support at 9875 with subsequent floors seen at the 50% extension at 9850, 9830, and 9800. Interim resistance now stands at 9920 backed by the 61.8% extension at 9945 and 9980. Look for the results of the Greek PSI and NFPs to drive price action over the next 24-hours with a breach above 9945 aggressively targeting topside resistance levels.

The greenback fell against three of the four component currencies highlighted by a 0.92% advance against the euro. The single currency has remained well supported on hopes that Greece will be able to avert a disorderly default. However as the euphoria of the PSI talks subside, traders will once again shift their focus on the macro issues facing the region with our medium-term bias on the euro still weighted to the downside. The Japanese yen was the worst performer of the lot with a decline of 0.62% against the dollar the yen losses persisted with the low yielder falling against all of its major counterparts. For complete scalp targets on the EURUSD and the USDJPY refer to today’s Winners/Losers report.

Tomorrow’s February non-farm payrolls report will be the central focus for traders with consensus estimates calling for the addition of 210K jobs with the unemployment rate expected to hold at 8.3%. Traders will be closely eyeing revisions to last month’s blowout print which topped even the most optimistic estimates with a print of 243K. Should last month’s read be significantly revised downward, look for broader risk appetite to come under pressure with the dollar also likely to lag as weaker data sparks further speculation that the Fed may look to implement further easing measures. On the other-hand, a strong print on the February report coupled with no revision to the January print could fuel flows into the dollar as investors begin to factor out further QE measures. As we noted earlier in the year, look for positive data to slowly begin to support the greenback as improving domestic conditions start to put pressure on the Fed to start normalizing monetary policy, thereby alleviating some of the pressure on the world’s reserve currency.