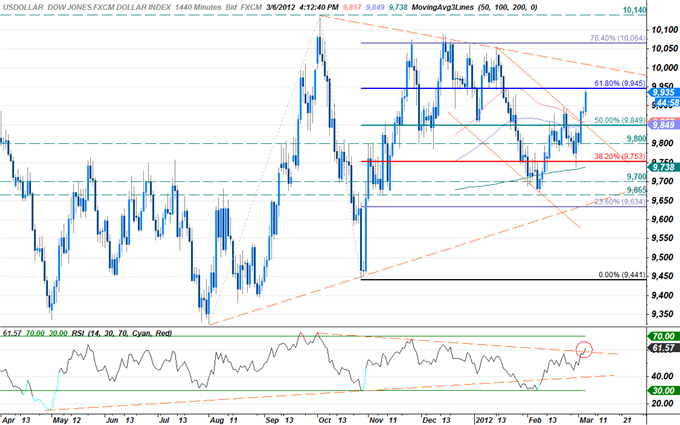 The greenback was markedly stronger at the close of North American trade with the Dow Jones FXCM Dollar Index (Ticker: USDOLLAR) advancing 0.52% on the session after moving a full 114% of its daily average true range. Ongoing concerns regarding a slowdown in China and the Greek debt saga has continued to weigh on broader market sentiment with equity markets posting their largest one-day decline this year. Stocks drifted lower throughout the session with the Dow, the S&P, and NASDAQ plummeting 1.57%, 1.54% and 1.36% respectively.

The move into risk aversion has fueled haven flows into the dollar with the index closing at its highest level since January 18th. The greenback closed just below key resistance at the 61.8% Fibonacci extension taken from the August 1st and October 27thtroughs at 9845. This level remains paramount for the index with a breach eyeing long-standing trendline resistance dating back to the October 4th highs, currently just above the psychological 10,000 barrier. Note that the relative strength index has now confirmed a break above key RSI resistance dating back to October 3rd, suggesting the index may now have enough momentum for a breach above 9945 in the days to come. Daily support continues to rest at the confluence of the 50% extension and the 100-day moving average at 9850. An hourly chart shows the index continuing to hold above trendline support dating back to February 29th before encountering resistance at former trendline support dating back to February 8th. A breach above this level eyes subsequent topside resistance targets at 9950, 9980 and the 10,000 mark. Interim support rests at 9920 backed by 9900, 9875, and the 50% extension at 9850. Look for the dollar to consolidate after advancing 1.45% over the last three days with a drawdown offering more favorable long entry positions.

The greenback advanced against three of the four component currencies highlighted by a 1.11% advance against the Australian dollar. The aussie remains under pressure after the RBA left the door open for further easing noting that inflation expectations leave “scope for further easing.” The remarks coupled with ongoing tensions in Europe and China fueled a broad-based risk sell-off with higher yielding currencies like the aussie and the kiwi coming under substantial pressure. The Japanese yen is the top performer of the lot with an advance of 0.85% on the session. Classic haven flows have continued to support lower yielding assets with the yen and the dollar acting as the chief beneficiaries as investors scale back their appetite for risk. For the updated USDJPY scalp targets refer to this morning Winners/Losers report.

Tomorrow’s US economic docket is highlighted by the February ADP employment report with consensus estimates calling for the addition of 205K private sector payrolls, up from a previous print of 170K. The report is often used as a gauge for the more encompassing non-farm payroll report which will be released on Friday, with traders eyeing calls for a print of 210K. As we noted earlier in the year, look for positive data to slowly begin to support the greenback as improving domestic conditions start to put pressure on the Fed to start normalizing monetary policy.