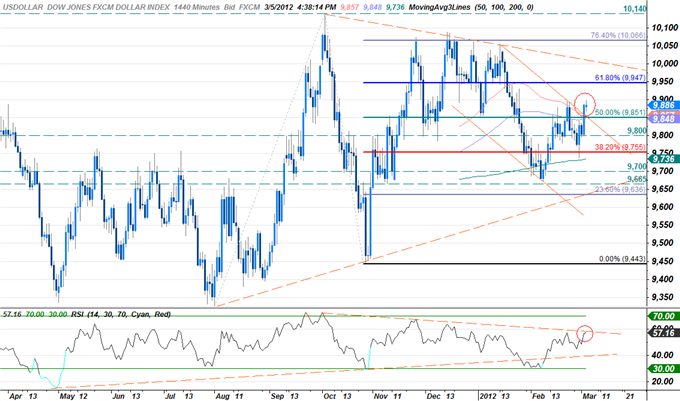 The greenback was fractionally weaker at the close of North American trade with the Dow Jones FXCM Dollar Index (Ticker: USDOLLAR) off by just 0.02% on the session. Equity markets spent the entire day paring early losses carried over from European trade with news that China had cut its 2012 growth forecast to 7.5% from 8.0% weighing on broader market sentiment. The move opens the door for further easing from the PBoC suggesting that the economy may ultimately face a ‘hard landing’. Stocks closed well off session lows but ended the lower on the day with the Dow, the S&P, and NASDAQ off by 0.11%, 0.39%, and 0.86% respectively.

The index continues to hold above key daily support at confluence of former channel resistance dating back to the January 13th, the 50 & 100-day moving averages, and the 50% Fibonacci extension taken from the August 1st and October 27thtroughs at 9850. A hold above this level remains paramount for the dollar with a break below eyeing subsequent daily targets at the 9800-mark and the 38.2% extension at 9755. Note that the daily relative strength index is now encountering trendline resistance dating back to October 3rd with a breach here suggesting further topside moves for the greenback. 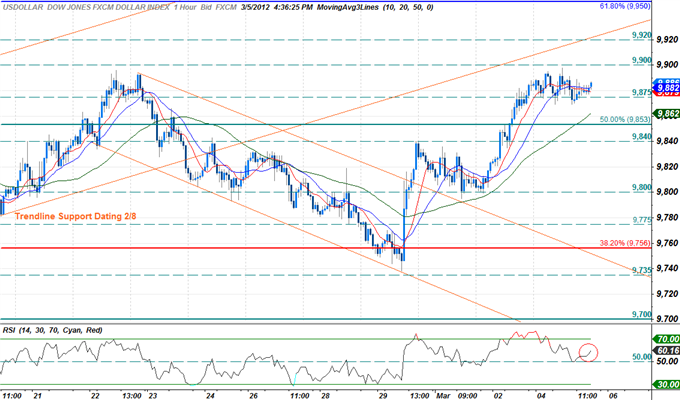 An hourly chart shows the index continuing to range between soft support at 9875 and soft resistance at the 9900-mark. We favor buying into dollar weakness with a breach above 9900 eyeing intra-day targets at 9920 and the 61.8% extension at 9950. Only a move below the 9840 congestion region negates or short-term bias with such a scenario eyeing subsequent support targets at 9800, 9775, and the 38.2% extension at 9755.

The greenback advanced fell against three of the four component currencies highlighted by a 0.34% decline against the Japanese yen. The USD/JPY outlook remains weighted to the topside with intra-day pullbacks offering favorable long entries. For complete scalp targets on the USDJPY refer to this morning’s Winners/Losers report. The Australian dollar was the weakest performer of the lot with a decline of 0.61% against the greenback. As China’s largest trading partner, a slowdown in aggregate Chinese demand has much steeper implications for Australia with the aussie coming under substantial pressure today on the heels of the growth downgrade. The AUDUSD has already broken below key support at the 1.0725 level with longer-term support targets eyed at the February 23rd low just shy of the 1.06-handle, and the 50-day moving average at 1.0550. All eyes will be on the RBA interest rate decision later tonight with central bank widely expected to hold the benchmark rate at 4.25%. Should Governor Glenn Stevens specifically cite increased concerns about a slowdown in China, look for the aussie’s decline to accelerate with higher yielding assets likely to track lower should the RBA leave the door open for further easing.

With no data scheduled on tomorrow’s US economic docket, the greenback will continue to take cues off of broader market sentiment with a continued sell-off in risk assets likely to keep the dollar well supported ahead of the key NFP employment data on tap later in the week.