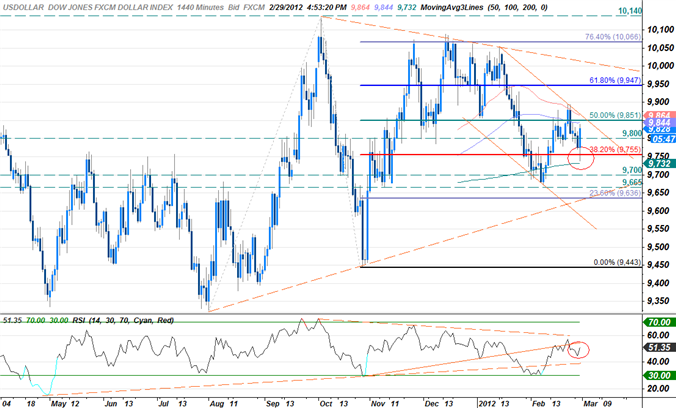 The greenback soared today in North American trade with the Dow Jones FXCM Dollar Index (Ticker: USDOLLAR) surging 0.63% on the session to mark the third largest rally this month. The index closed out February higher by 0.73% and now looks to test critical topside resistance as we head into March. Equity markets whipsawed throughout the session as traders digested the results of the ECB’s second and final LTRO and Fed Chairman Ben Bernanke’s testimony before the House Financial Services Committee. European banks demanded €530 billion in fixed, ultra-low rate, 3-year loans from the central bank today as Bernanke silenced continued calls for additional easing with the omission of further QE talks in his statement before the house. Stocks closed markedly lower on the session, albeit off session lows, with the Dow, the S&P, and NASDAQ posting declines of 0.41%, 0.47%, and 0.67% respectively.

The index briefly dipped below key support noted in yesterday’s USD Trading report at the 38.2% Fibonacci extension taken from the August 1st and October 27thtroughs at 9755 before mounting a counter offensive that saw the dollar close just below the 100-day moving average at 9844. The move marks the largest advance in the index since the 14th when the dollar surged 0.72% and suggests the greenback may continue to rally as we head into a new month. Key daily resistance now stands at the convergence of the 50% extension and channel resistance dating back to January 13th at 9850 with soft interim support eyed at 9800. Look for a break above former RSI support dating back to the October 27th low to confirm a breach above the 9850 mark. 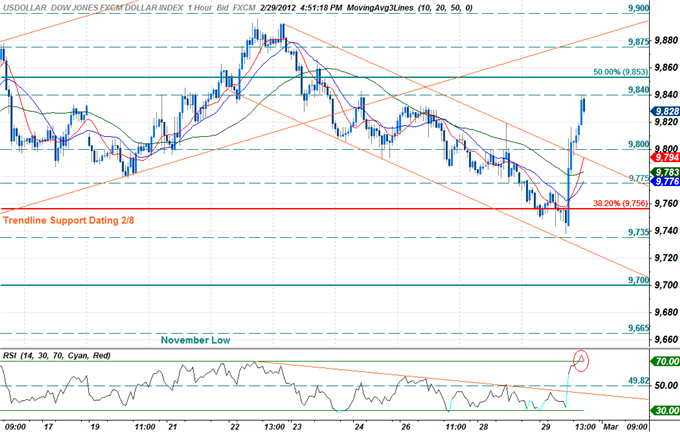 An hourly chart shows the severity of today’s rally with the index breaching channel resistance dating back to February 22nd before encountering soft resistance at 9840. A break above this level eyes interim resistance targets at the 50% extension at 9850, 9875, and 9900. Support now rests at the 9800-mark backed by former channel resistance, 9775, and the 38.2% extension at 9755. Look for the dollar to consolidate ahead of the Asian open with a breach above 9850 eyeing subsequent topside targets.

The greenback advanced against three of the four component currencies highlighted by a 1% advance against the euro. The single currency fell against all its major counterparts today as ongoing concerns regarding sustainability in the region amid recessionary conditions and broad based dollar strength saw traders jettison the currency across the board. While the drawdown today was notable, the pair still needs to clear key support at the 1.33-figure with such a scenario putting us more aggressively on the short side. Interestingly enough, the sterling remained well supported today with the pound topping the performance chart with an advance of 0.06%. The pound has continued to decouple from broader risk trends with the pair also holding just above key support at the 1.59-figure.

Tomorrow’s US economic sees a flurry of data highlighted by January personal income/spending, core PCE, construction spending, and the February ISM manufacturing print. Investors will be lending a keen ear to yet another day of testimony from Bernanke, this time as he speaks before the Senate Banking Committee. As US data continues improve, the negative correlation between the dollar and equity markets may begin to diminish as European prospects turn bleak and calls for further dollar diluting QE measures subside. With that in mind, we will be closely eyeing price action in the greenback on these upcoming prints with the possibility of a new bull rally in the dollar possible as we kick off the start of a new month.