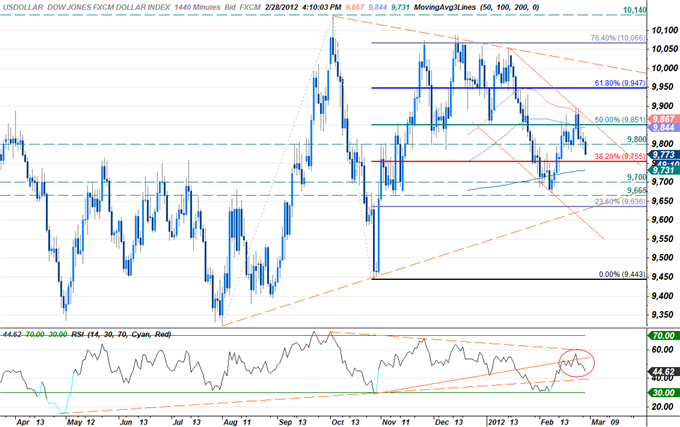 The greenback is markedly lower at the close of North American trade with the Dow Jones FXCM Dollar Index (Ticker: USDOLLAR) off by 0.32% on the session after moving 81% of its daily average true range. The losses come on the back of a rally in equities that saw the Dow close above the psychological 13,000 level for the first time since May of 2008. Equities started the session on the defensive after a weaker than expected print on January durable goods orders grossly missed consensus estimates with a print of -4.0%. A blowout print on the February consumer confidence survey saw a reversal in early trade with the report posting its highest levels since February of last year at 70.8. The rally in risk continued into the close with the Dow, the S&P, and NASDAQ advancing 0.18%, 0.34% and 0.69% respectively.

The index continues to trade within the confines of a descending channel formation dating back to the January 13th high with the dollar closing just above key daily support at the 38.2% Fibonacci extension taken from the August 1st and October 27thtroughs at 9755. Daily resistance continues to hold at the convergence of the 50% extension and channel resistance at 9850 with the relative strength index pulling further away from former RSI support dating back to the October 27th low, suggesting further losses for the reserve currency in the interim. 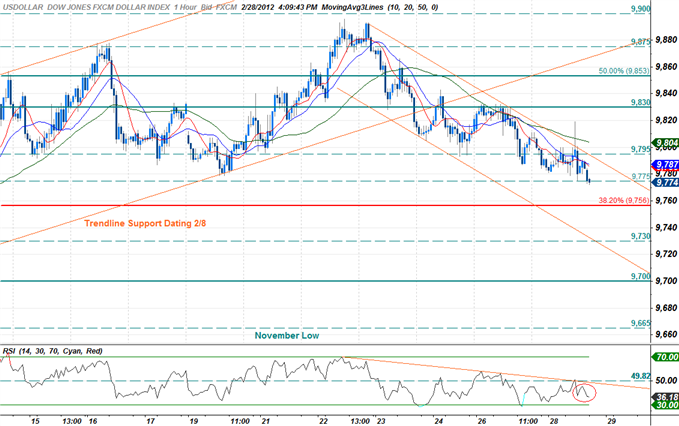 An hourly chart shows the index holding within the confines of a short-term descending channel formation dating back to the February 22nd highs after a brief topside break on headlines out of Europe was quickly pared in early US trade. The dollar closed just above soft support at 9775 with a break eyeing subsequent floors at the 38.2% extension 9755, 9730, and 9700. Channel resistance should cap dollar gains in the interim with a breach eyeing topside targets at 9795 and 9830. Look for the dollar to remain under pressure with a break above RSI resistance likely to alleviate some of the pressure for the reserve currency.

The greenback fell against all four component currencies highlighted by a 0.50% decline against the euro. The single currency has remained well supported ahead of tomorrow’s final ECB LTRO (Long Term Refinancing Operation) where the central bank will offer three year fixed rate loans to the European banking sector. Speculation about the amount banks will look to attain continues to be well distributed with ECB president Mario Draghi citing expectations of a similar result as the previous offering in December when banks demanded €498 billion. For complete scalp targets on the single currency refer to this morning’s Winners/Losers report. The Australian dollar was the weakest performer of the lot with an advance of just 0.12% despite broad-based losses in the greenback. Traders will be eying retail sales and private sector credit data later this evening with the aussie holding just below critical resistance at the 1.08-figure.

Tomorrow’s US economic is highlighted by the second reading on 4Q annualized GDP print and personal consumption. Both are expected to remain unchanged at 2.8% and 2.0% respectively with the core PCE also expected to hold at 1.1% q/q. Investors will be lending a keen ear to Fed Chairman Ben Bernanke’s testimony tomorrow before the House Financial Services Committee as he delivers his semi-annual monetary policy report. As always, remarks regarding further quantitative easing measures will be at the forefront with any hints towards further easing likely to boost risk appetite at the expense of the greenback. The next 24 hours remain crucial for the dollar with the LTRO in Europe presenting the most significant event risk for broader risk sentiment.