US Dollar Drifts Amid Lackluster Equity Performance- Index at Risk 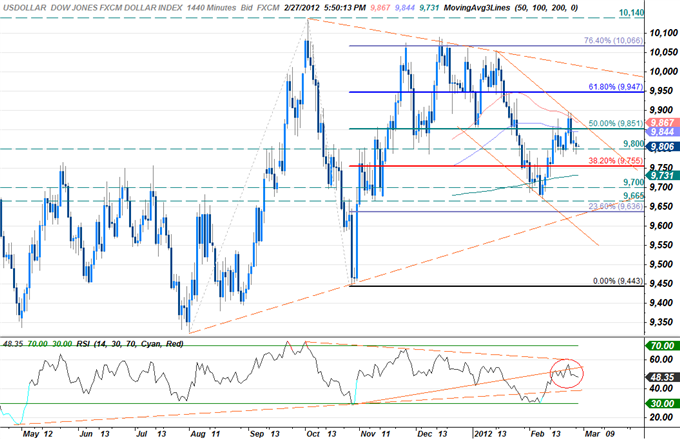 The greenback was fractionally lower at the close of North American trade with the Dow Jones FXCM Dollar Index (Ticker: USDOLLAR) off by 0.05% on the session after moving 79% of its daily average true range. Equity markets spent a bulk of the day paring early losses as risk started the week on the defensive with the S&P and NASDAQ closing higher by 0.14% and 0.08% respectively. The Dow was virtually unchanged at the close of trade with a loss of just 0.01%. The dollar was mixed throughout the session with the greenback advancing against its European counterparts while higher yielding “risk currencies” advanced.

The index continues to trade within the confines of a descending channel formation dating back to the January 13th high with the greenback closing just below daily soft support at the 9800-mark. Key daily support now rests with the 38.2% Fibonacci extension taken from the August 1st and October 27thtroughs at 9755 with resistance holding at the 50% extension at 9850. Note that the daily relative strength index continues to pull away from former RSI support dating back to the October 27th low and suggests the dollar continues to lack directional momentum at this time. 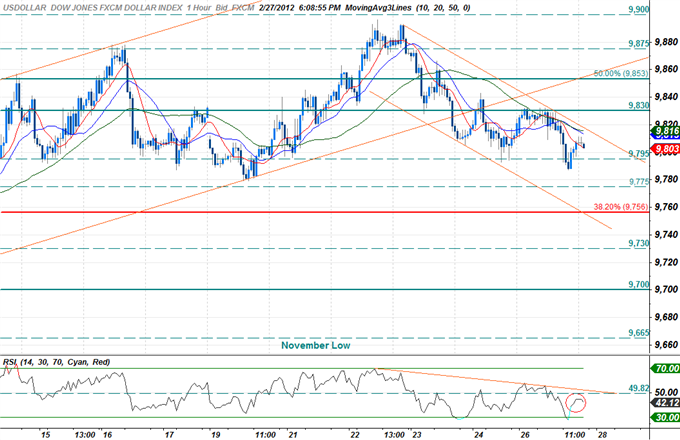 An hourly chart shows the index holding just above soft support at 9795 after briefly breaking below in earlier in the session with the dollar trading within the confines of a short-term channel dating back to the February 22nd highs. A move below this level eyes subsequent support targets at 9775, the 38.2% Fibonacci extension at 9755, and 9730. Topside resistance stands with the upper bound channel line backed by 9830 and the 50% extension at 9850. Look for the dollar to remain under pressure with a break above channel resistance coupled with a break above RSI resistance likely to alleviate some of the pressure for the reserve currency in the interim.

The greenback advanced against two of the four component currencies highlighted by a 0.38% advance against the euro. Investors continue to look ahead to the ECB’s final LTRO tender this Wednesday with all eyes focused on the amount banks will request from the central bank at a three year fixed ultra-low rate. The Japanese yen was the top performer of the lot with an advance of 0.73% on the session after moving a staggering 243% of its daily average true range. For complete scalp targets on the EURUSD and the USDJPY refer to today’s Winners/Losers report.

Tomorrow’s US economic docket is highlighted by the January durable goods orders and the February consumer confidence print. Durable goods orders are expected to have contracted last month with consensus estimates calling for a contraction of 1.0% after posting a 3.0% gain a month earlier. Traders will be closely eyeing tomorrow’s consumer confidence release after the University of Michigan confidence print posted its highest levels since February of 2011. Estimates call for confidence to improve to 62.7 from a previous print of 61.1 with a stronger print likely to support the risk trade as market participants continue to eye improving US data.