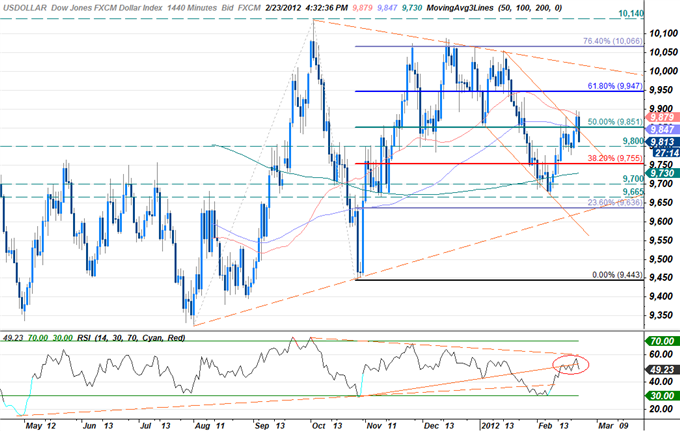 The greenback tumbled in North American trade with the Dow Jones FXCM Dollar Index (Ticker: USDOLLAR) off by 0.64% on the session after moving a full 128% of its average daily true range. Despite losses seen in European markets, US equities pared early losses to close higher on the day with the Dow, the S&P, and NASDAQ advancing 0.36%, 0.43%, and 0.81% respectively. Better than expected prints on weekly jobless claims, the December house price index, and the Kansas City Fed manufacturing index boosted risk sentiment with investors seemingly shrugging off news out of Europe that the region was heading for its second recession in three years. The risk rally proved to be heavy for the dollar with the index posting its largest single day loss since January 27th and the third largest decline this year.

The dollar broke back below the key resistance level noted in yesterday’s USD Trading report at the convergence of the 50% Fibonacci extension taken from the August 1st and October 27thtroughs at 9850 before closing just above interim daily support at 9800. The index now rests back within the confines of the descending channel formation dating back to January 4th with the daily relative strength index also unable to hold above former RSI support dating back to the October 27th low, suggesting that yesterday’s topside breach may have been a false break with further dollar losses likely. 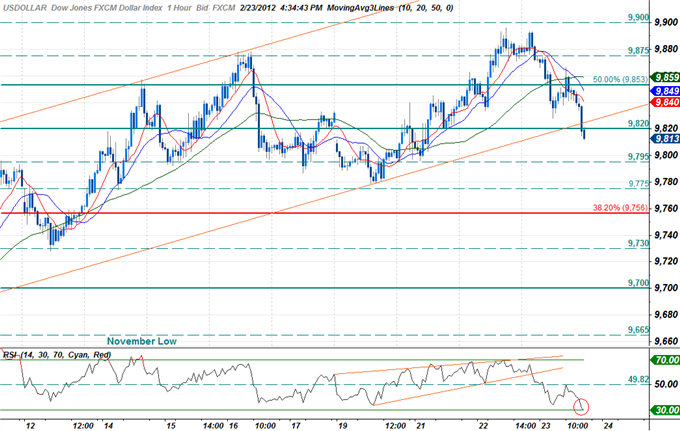 An hourly chart shows the index breaking below channel support dating back to February 8th with RSI breaking below trendline support dating back to the February 20th low. Interim support now rest at 9795 with subsequent downside targets seen at 9775, the 38.2% extension at 9756, and 9730. Topside resistance holds with former channel support backed by the 50% extension at 9850, 9875, and 9900. Look for the dollar to consolidate ahead of the weekend with further losses expected in the medium-term.

The greenback fell against all four component currencies highlighted by a 0.90% decline against the euro. The single currency has remained resilient in the face of ongoing concerns regarding a Greek default and a “mild recession” in the EU. While default fears have now subsided in the interim, traders now look to the LTRO (Long Term Refinancing Operation) on February 29th when the ECB will offer its last round of 3-year fixed rate loans in an effort to thwart a possible liquidity crunch and ease conditions. Expectations regarding the amount banks will demand have been well distributed across the spectrum with ECB president Mario Draghi citing expectations for a similar result to December when the ECB dished out €489 billion. Our interim bias on the euro remains weighted to the topside with only a break below 1.3265 putting us back on the short-side. For complete euro scalp targets refer to this today’s Winners/Losers report.

Tomorrow’s US economic docket is highlighted by the University of Michigan confidence survey and January new home sales. Sales are expected to have climbed to the highest levels since May 2010 with consensus estimates calling for a print of 2.6% m/m, up from a previous decline of 2.2% m/m. The data would further support calls for a bottom in housing with more attention being put on the sector as further calls for QE look to target mortgage backed securities. U. of Michigan confidence survey is expected to also improve with estimates looking for a print of 73.0, up from a previous read of 72.5. Should the data come in at expectations or better, look for the risk trade to remain well supported with the dollar likely to remain under pressure.