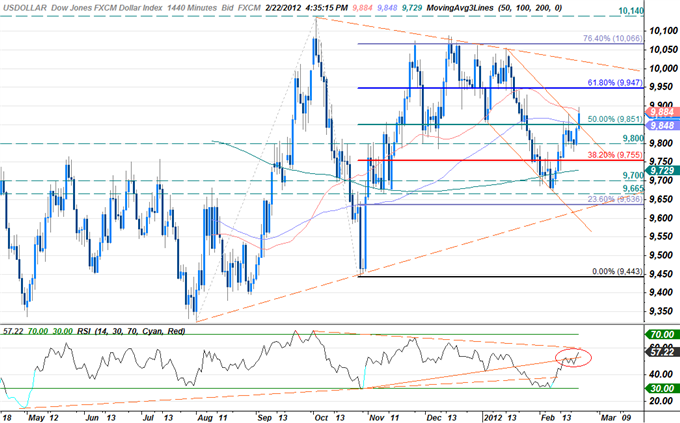 The greenback is markedly higher at the close of North American trade with the Dow Jones FXCM Dollar Index (Ticker: USDOLLAR) advancing 0.45% on the session after moving a full 103% of its average daily true range. Markets remained on the defensive today with lingering concerns over the ongoing EU debt crisis and rising crude prices continued to weigh on broader market sentiment. Equity markets closed well off session lows but held in the red with the Dow, the S&P, and NASDAQ off by 0.21%, 0.33%, and 0.33% respectively. As we noted in yesterday’s USD Trading report, markets have continued to lack conviction with dollar strength persisting throughout the session as traders trimmed bets on higher yielding assets.

The dollar breached key resistance at the confluence of the 100-day moving average, former channel resistance dating back to January 13th, and the 50% Fibonacci extension taken from the August 1st and October 27thtroughs at 9850. The index encountered resistance at the 50-day moving average at 9884 before closing just lower at 9880. Note that the daily relative strength index broke above former RSI support dating back to the October 27thlow suggesting further dollar advances may be in the cards in the days to come. 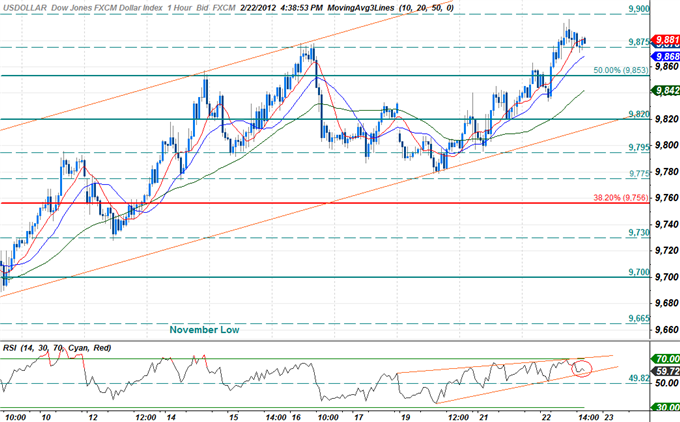 An hourly chart shows the index continuing to trade within the confines of an ascending channel formation dating back to the February 8th low with the dollar closing just above soft support at 9875. Subsequent support targets are eyed at the 50% extension at 9850, 9820, and 9795. Topside resistance holds at 9900 backed by 9920 and the convergence of channel resistance and the 61.8% extension at 9950. Look for the dollar to consolidate over the next 24hours with a hold above 9850 key for further dollar advances. Should this level be compromised, look for the reserve currency to come under increased pressure with a move below 9750 risking substantial losses.

The greenback advanced against three of the four component currencies highlighted by a 0.71% advance against the pound. BoE minutes overnight weighed heavily on the sterling after the vote count showed two MPC members, Adam Posen and David Miles, voted to expand the asset purchase program by £75billion as opposed to the £50billion expansion voted back on February 9th. While the move does suggests that some members see an increased risk of further tightening in liquidity, the minutes cited that a larger increase, “risked sending a signal that the committee thought the economic situation was weaker than it was.” Although the immediate reaction saw the pound come under pressure, a closer look at the minutes offers a less dovish tone than expected with the report going on to note the, “possibility that growth might be stronger than expected in the near-term.” The sterling moved a full 156% of its average daily true range with the pair closing just above key support at 1.5660. The euro was the top performer of the lot with a marginal advance of just 0.08% as the single currency continued to hold within a tight range between key targets at 1.3165 and the 1.33-figure.

Tomorrow’s US economic docket is highlighted by the December house price index and weekly jobless claims. Unemployment claims are expected to rise to 355K from a previous print of 348K with growth in house prices expected to slow to 0.4% m/m form a previous read of 1.0% m/m. While the print has historically offered little volatility, an extreme print could impact intra-day risk appetite if the pace of price growth tops consensus estimates. Data aside, look for European headlines to continue to drive broader market sentiment with the dollar likely to remain well supported should risk appetite remain heavy heading into the US session.